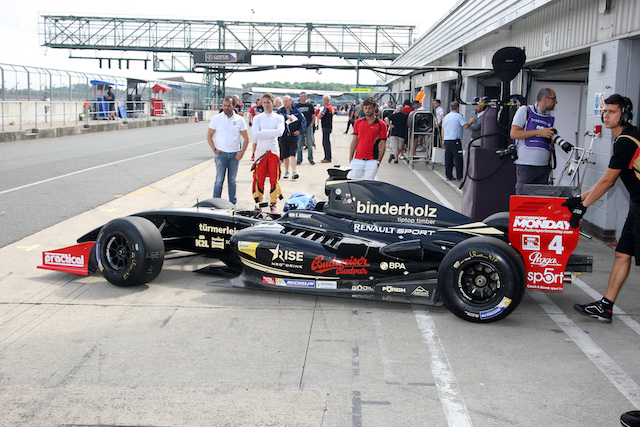 Roy Nissany survived a crash with?Egor Orudzhev to win the first of the Formula V8 3.5 races at Silverstone, his maiden victory in the series.

Orudzhev had taken the lead at the start of the race from slow-starting poleman?Matthieu Vaxiviere, and appeared to be putting in another great defensive drive to victory as he kept Nissany – Friday’s dominant pacesetter – behind him.

The front duo quickly pulled away from the rest, which were headed by another SMP-liveried car holding off a Lotus with Vaxiviere keeping?Rene Binder at bay.

That gap would come in handy for Nissany when he made a bid for the lead at Stowe.

The Israeli was clearly down the inside of the Russian, but Orudzhev attempted to stay around the outside as they turned in. Wheel-to-wheel contact was made, sending both cars spinning into the run-off.

The gap over Vaxiviere was such that both were able to rejoin still ahead. Nissany led but Orudzhev had damage to his car, sending him straight on at Vale and at Abbey, as the cars behind came past him.

Over the remaining distance, of around 10 minutes, Nissany was able to pull away from Vaxiviere, opening up a six-second lead before the finish. The incident with Orudzhev will be investigated, however.

Vaxiviere kept Binder behind him to finish second, while?Tom Dillmann took fourth. That extends the Frenchman’s championship lead with closest rival?Louis Deletraz finishing down in 10th after stalling on the grid and causing the start to be aborted.