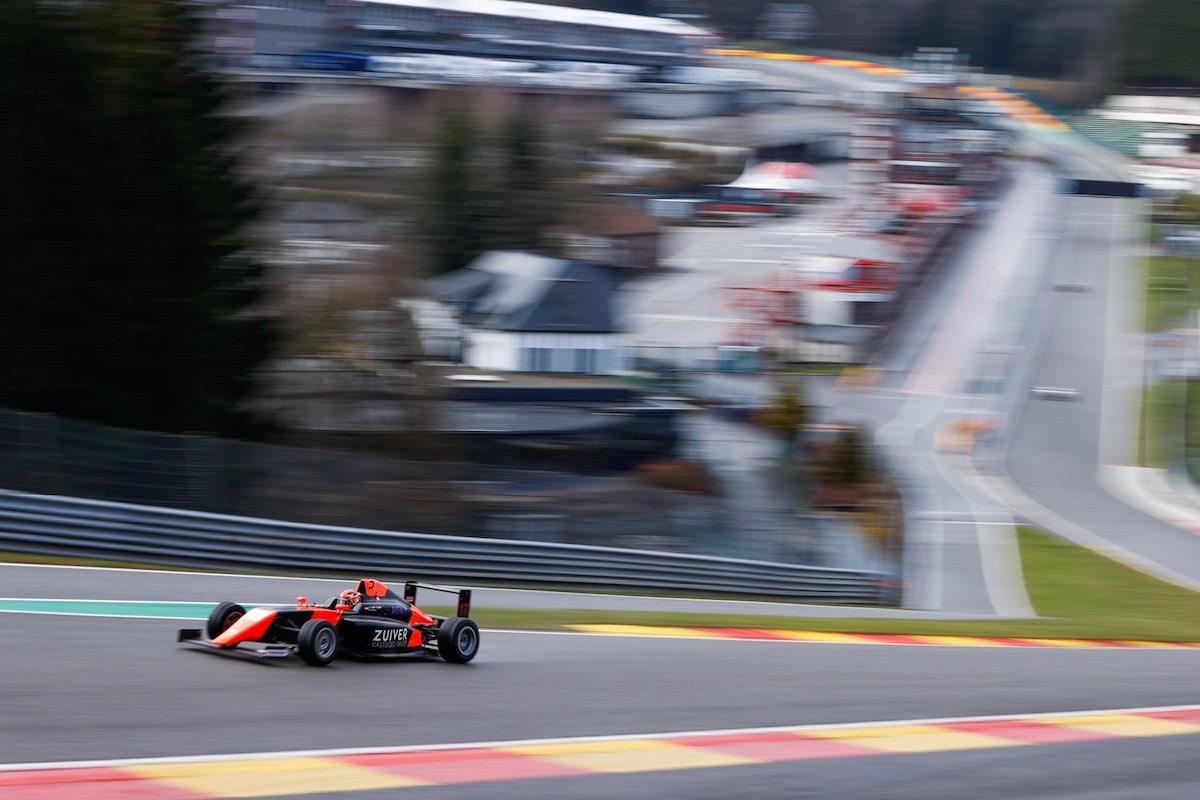 Dilano van’t Hoff took victory in the first race of the Spanish Formula 4 season at Spa-Francorchamps ahead of car racing debutant Daniel Macia.

Driving for the Praga-run Formula de Campeones squad, Macia took the lead at the start of the race ahead of MP Motorsport driver van’t Hoff as pole-sitter Alex Dunne slipped to fourth on the short run to La Source behind Campos Racing’s Pepe Marti.

Van’t Hoff challenged Macia at the end of the Kemmel Straight but both drivers ended up running deep, opening the door for Dunne – announced this morning as the first junior driver for KCMG – to retake the lead.

The safety car was deployed on lap two following two separate incidents – one in which Oliver Michl locked up and took out Noah Abramczyk at the Bus Stop chicane, the other where Guilherme Oliveira and Gil Molina collided at Les Combes.

At the restart with just over 10 minutes remaining, Macia again moved to the head of the field on the approach to Les Combes but again ran a little deep, and it was van’t Hoff who instead emerged from Malmedy with the lead.

Macia then tried to go around the outside of van’t Hoff at the following Bruxelles right-hander but found himself demoted to fourth behind Dunne and Santiago Ramos.

Driving for Jenzer Motorsport, Italian F4 regular Ramos went on to take second away from Dunne, only for Macia to charge back through into second place with three minutes left on the clock.

By this point, van’t Hoff – who won five times in his maiden single-seater campaign in the United Arab Emirates F4 series earlier this year – had opened up a margin of over a second out front, but Macia would close right up to him by the time they went through the Bus Stop chicane for the final time, with just under half a second between them at the line.

Dunne was put back to fifth place by Marti at La Source on the penultimate lap, but found himself back up in third by the time he reached Les Combes as Ramos was pushed back the other way.

While Dunne completed the podium, Macia’s team-mate Quique Bordas snatched fourth from Marti, outdragging him to the finish line. Ramos took sixth after having to fend off the second-best MP driver Georg Kelstrup, who is being coached by Belgian ex-Formula Two racer Benjamin Bailly.

Francesco Braschi came from 17th on the grid to finish eighth for Jenzer ahead of Sebastian Ogaard (Campos) and Filip Jenic (Teo Martin Motorsport).