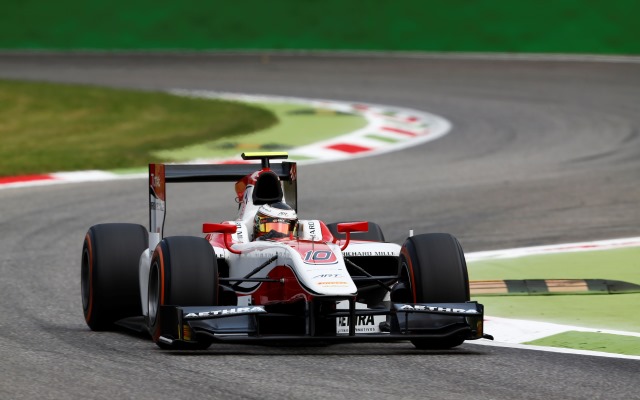 Stoffel Vandoorne claimed his second GP2 pole position in a row after coming out on top in Monza qualifying.

Third fastest after the opening runs, the ART Grand Prix driver was sent out early in the second half of the session on what was a near-empty track, but that gamble seemed like it would backfire massively when he hit slow traffic once he was up to speed himself.

But the McLaren junior was later able to pull a faster time out of the bag and go two tenths quicker than Arthur Pic, who had looked unbeatable up to that point.

Practice pace-setter Pic could have given himself a safer margin going into the middle of the session but for a sideways moment on entry to the Parabolica when he was on course to improve his benchmark time. His hopes of improving that took another hit later in the session when he caught a slow Rio Hayranto at Ascari, visibly riling the usually clam Frenchman.

Pic was just able to hold onto second though, after Mitch Evans had come within 0.008 seconds of his time with the Kiwi’s first attempt of his second run.

Championship leader Jolyon Palmer was second to Pic in the first half of the session, and although he did improve that time, he would end up settling for fourth. He might have improved had he not been heavily impeded by a struggling Johnny Cecotto at the Parabolica late in the session.

After beating Vandoorne to the feature race win a fortnight ago at Spa, Ferrari protege Raffaele Marciello was unable to challenge for pole at home and ended up fifth. Simon Trummer carried his pace into qualifying to take sixth, ahead of Palmer’s DAMS team-mate Stephane Richelmi.

Title contender Felipe Nasr was again low-key in qualifying and will need to repeat his Spa heroics to cut the points gap to Palmer from eighth on the grid. Julian Leal, who is being supported at Monza this weekend by compatriot and Monza average speed record holder Juan Pablo Montoya, took ninth with Andre Negrao completing the top ten.

Series debutant Pierre Gasly was 23rd with Caterham, as the first driver not within a second of pole.