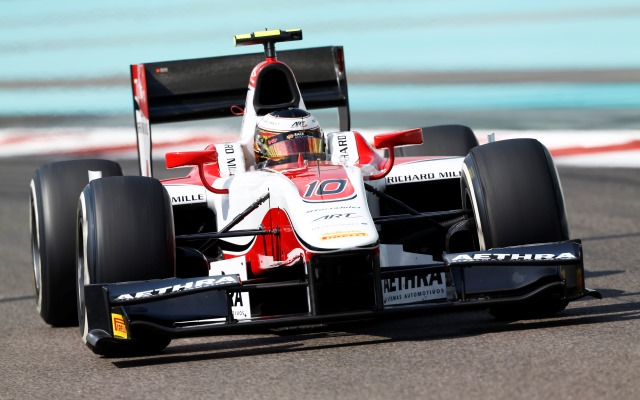 Stoffel Vandoorne has become the first driver to ever take pole position at four consecutive rounds in the GP2 Series by topping qualifying for the final round of 2014 in Abu Dhabi.

The McLaren protege led much of the session, initially taking top spot away from champion Jolyon Palmer on his second flying lap.

On the second runs in the closing stages, he was briefly relegated down to fourth as others improved, but reclaimed first place with a lap that would go unbeaten.

He beats Nelson Piquet’s record of three straight poles from the end of 2006, and takes the four bonus points to half the gap to Felipe Nasr in their scrap for the runner-up spot in the final standings.

Palmer was 0.099s adrift in P2, ending any hopes of improving on his final lap when he ran well wide at the penultimate corner. Stephane Richelmi enjoyed a strong showing, taking third after twice briefly leading before being bettered by his DAMS team-mate.

Mitch Evans was fourth fastest, six tenths away from pole, ahead of 2015 Sauber driver Nasr. Pierre Gasly took a fine P6 on the last of his three-event GP2 programme with Caterham, with the Red Bull Junior expected to do a full campaign in the series next season.

Arthur Pic couldn’t repeat his front row heroics of Monza and Sochi and will have to make do with starting seventh, alongside Ferrari’s Raffaele Marciello.

Stefano Coletti was fourth after the first runs but failed to improve, and was pushed back to ninth ahead of Rio Haryanto.