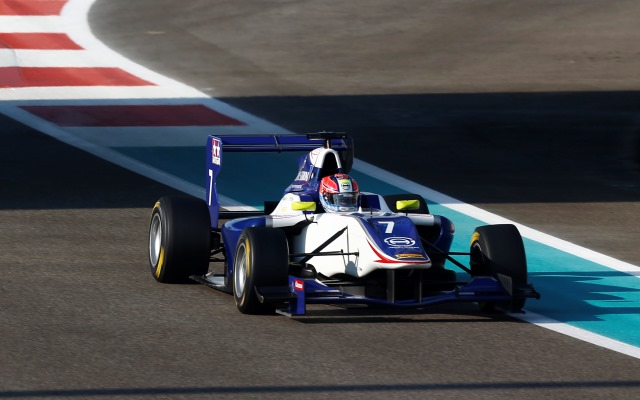 A fast start gave Dean Stoneman his fifth win of the GP3 season in race one in Abu Dhabi, one year on from his return to single-seaters.

Stoneman got a superb launch from P2 on the grid to lead pole-sitter Marvin Kirchhofer into the first corner.

The safety car came out at the end of lap one after Patrick Kujala got his braking wrong at the end of the back straight, spinning Matheo Tuscher around and being collected by Luis Sa Silva.

Stoneman jumped early at the restart and very nearly caught the safety car before the line at pit entry, but just got away with it. He built a two-second advantage over Kirchhofer on the first lap after the restart, but the German driver gradually closed to within a second.

He was unable to get near enough to launch a bid for the lead though, with Stoneman winning by 0.8 seconds.

The Briton has reclaimed P2 in the standings away from Kirchhofer, taking a two-point margin into the final race of the season.

Dino Zamparelli took his sixth podium of the year in third, benefiting from Carlin team-mates Emil Bernstorff and Alex Lynn getting quite close at turn one, with newly-crowned champion Lynn running wide and falling to fifth.

Kevin Ceccon was ninth, while Jimmy Eriksson claimed tenth. Santiago Urrutia had passed his Koiranen team-mate on the first lap and finally looked set for his first point in the series, but failed to defend the position well enough and was later bumped down to P11.