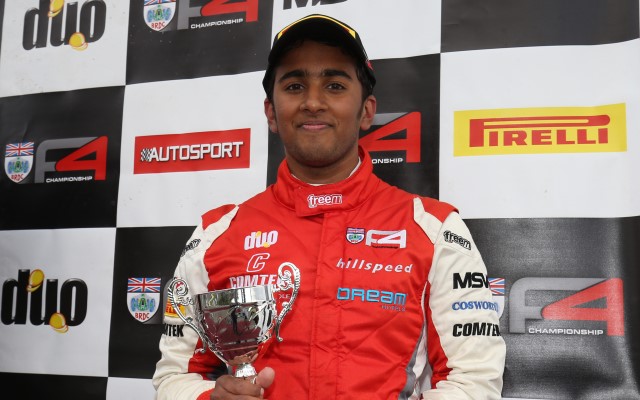 Indian driver Ameya Vaidyanathan has joined BRDC Formula 4 newcomers Carlin for his second season in the championship in 2016.

Vaidyanathan began his racing career this year with a dual campaign in Britain’s two F4 championships and claimed three podium finishes in the BRDC series and 12th in the standings while driving for Hillspeed.

He also did seven of the 10 MSA Formula rounds for JTR with a best finish of 10th, and made a one-off Formula Renault 2.0 appearance in the NEC with MGR Motorsport.

He joins MSA Formula champion Lando Norris in signing for Carlin’s BRDC F4 entry, which coincides with the introduction of a new car for 2016.

?I’m very excited to be racing with Carlin for next year, and with their wealth of experience and knowledge, I’m confident I can build on my first year in the championship,” he said.

?Since the car for next year is new, the learning curve for everyone certainly is a big one, but having tested with the team, it’s great to see the positive direction we’re heading in.

“This really is a fantastic opportunity for me, and I hope to hit the ground running when the season begins.?

Team boss Trevor Carlin commented: “Ameya is incredibly dedicated and professional and has set out a number of goals that he works incredibly hard to meet.

“To take three podiums in his first ever season of racing is quite an achievement and together I?m sure we can build on this potential and enjoy a great season together in 2016.”