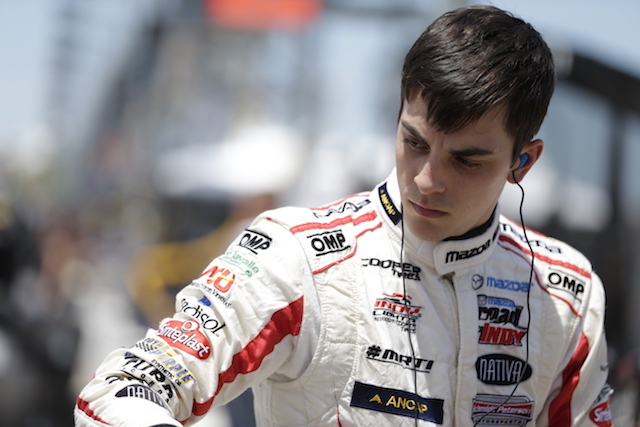 Santiago Urrutia has secured a second season in Indy Lights in 2017 after narrowly missing the title in his rookie campaign.

The Uruguayan has joined the Belardi team after his former outfit Schmidt Peterson Motorsport closed its Lights operation following the 2016 season.

Former GP3 racer Urrutia won the Pro Mazda title in his first year in North America in 2015, earning a Mazda scholarship for the step up to Indy Lights.

After four wins during his debut campaign, Urrutia led the standings into the final round at Laguna Seca, but lost the title to Ed Jones on the final lap of the season when his rival was handed a position by a team-mate.

“I am very happy to sign with Belardi, as I was fighting with the team?s drivers all year in 2016,” he said.

“I have only one goal, and that is to win the championship, and I am going to try to win every race for the team.

“If I can?t win, I?ll be aiming for seconds and thirds, whatever I need to win the title.

“What happened at Laguna Seca in the finale is now in the past, and I am looking at the future.

“I have to thank all of my fans, my engineer, my sponsors in Uruguay and I want to thank Brian Belardi for believing in me.”

Team owner Belardi said: “We?re extremely excited to being adding Santi to our stable of drivers for the 2016 season.

“We?re coming off a really strong season and our staff is highly motivated to make 2017 even better.

“Signing a driver of Santi?s calibre will once again put us into the fight for a championship.

“The entire team is fired up with the announcements of Santiago and Shelby and we?re hoping to confirm a third driver early in the new year.”