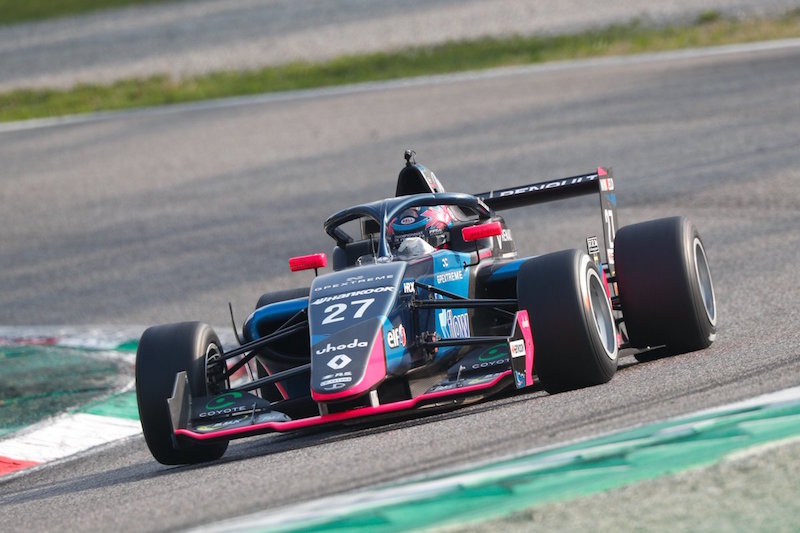 Ugo de Wilde won on his Formula Renault Eurocup debut in the first race of the championship’s new era at Monza, leading home fellow rookie Leonardo Lorandi in a one-two for JD Motorsport.

Sixteen-year-old French Formula 4 runner-up de Wilde made a better start from second than pole-sitter Lorenzo Colombo to lead into the first corner.

Colombo – who moved from JD to MP Motorsport over the winter – then had a spin on the exit of the chicane, causing him to retire on the spot and prolong his wait for a maiden Eurocup victory.

That brought out the safety car, but de Wilde – the youngest driver on the Eurocup grid – kept hold of his lead at the restart over Lorandi was largely unchallenged thereafter, winning by 1.5 seconds.

Kush Maini made it an all-rookie podium for M2 Competition in the team’s first European race.

Lorandi and Maini – whose older brothers Alessio and Arjun have spent much of their careers together as team-mates – battled on track after the former ran through the gravel exiting the second Lesmo.

They went side-by-side at one stage but Lorandi did enough to stay ahead and Maini instead had to try and fend off Victor Martins.

Renault junior Martins had by far the best race of the pre-season championship favourites, even though his initial attempts to get by Maini caused him to fall to sixth behind Oscar Piastri.

Piastri would then lose his front wing fighting Federico Malvestiti for fourth, rounding out a miserable day for his R-ace GP team. Alexander Smolyar also had to pit for a new nose after early contact from 13th on the grid, while Caio Collet had to settle for 12th from the penultimate row of the grid.

Monza native Malvestiti was ultimately re-passed by Martins but came out on top in a late fight with Sebastian Fernandez to finish fifth for Bhaitech.

Joao Vieira survived an off-road moment at Ascari to finish seventh in the third JD entry, two-and-a-half years since his last race in Italian F4.

Frank Bird, Petr Ptacek and Yves Baltas rounded out the top 10, while Fernando Alonso watched his leading driver Callan O’Keeffe come up just short of the points in 11th following a disappointing qualifying session for the new Drivex-run squad.