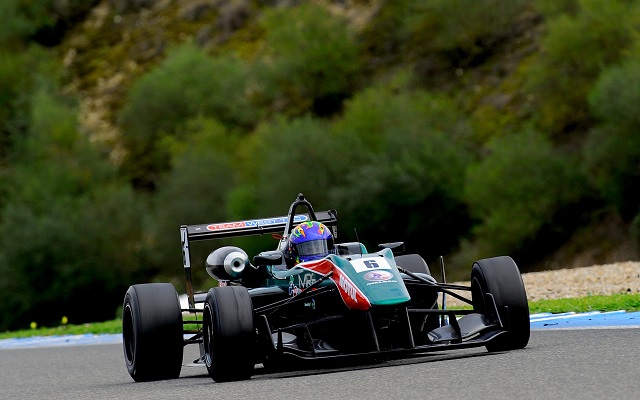 Twynham, who is confirmed for a full-time seat in the regular championship, was closely followed by Japanese rookie Yu Kanamaru, with only the pair of them managing laps quicker than 2:03s. Artur Janosz started his campaign with RP Motorsport with a promising third place, while 2012 Copa class champion Kevin Giovesi and Che One Lim completed the overall top five.

In the first session of the day it was Tatiana Calderon who set the best time. The Venezuelan, who was unveiled for the Winter Series by EmiliodeVillota Motorsport at the last minute, beat 16-year-old youngster Christopher Hoher by less than three tenths. Tanart Sathienthirakul and Yarin Stern followed the Austrian in the leaderboards with Kanamaru rounding out the top five.

The second practice proved to be quickest with everyone who occupied the overall top five of the day setting their personal best laps during the one-hour session in question.

There would be no changes to the combined timesheets after the lunch break as rain would hit the track, affecting all of afternoon running. Th conditions proved rather beneficiary to noted rain specialist Twynham, who convincingly beat everyone but Giovesi and Hoher by more than one second. EmiliodeVillota’s Kanamaru and DAV Racing’s Hector Hurst completed the top five.

The track was drier for the final run of the day, but the drivers’ best laps did not come close to their morning efforts. Giovesi ended the day on top with Campos duo of Sean Walkinshaw and karting graduate?Alex Palou in second and third respectively. Kanamaru and Hurst again found themselves in fourth and fifth.

The action will resume tomorrow with two more practice sessions, a qualifying and the first race of the Winter Series which will then go on a two-week-long break.

Cecotto returns to Trident to remain in GP2 for 2014