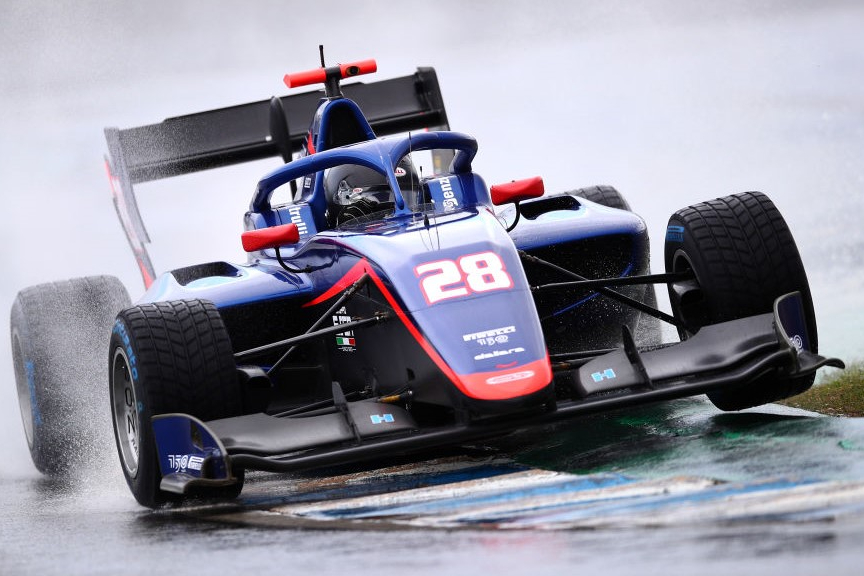 Enzo Trulli has been penalised for hitting Arthur Leclerc in FIA Formula 3 Championship qualifying at Imola, and Leclerc’s Prema team-mate Ollie Bearman has also been handed a penalty.

Trulli was the only driver in a drying qualifying session to attempt to use slick tyres, but slid into Leclerc on the run down to Rivazza. Leclerc was spun firmly into the gravel, and Trulli damaged his front wing.

The stewards stated that “during the hearing, the driver of Car 28 [Trulli] explained that he was on slick tyres and coming into turn one, he wanted to overtake Car 04 [Leclerc] on the inside and started to understeer and could not avoid a collision with Car 04.

“The driver of Car 28 explains that the damp part of the track caused him to lose control of the car. Having considered the matter extensively, the stewards determined that Car 28 is wholly to blame for causing the collision.”

As a result, Trulli moves to the back of the grid for Saturday’s sprint race, which is only a one-place deduction having qualified 28th.

Leclerc, who qualified 21st, said: “We had really good pace in qualifying, we showed that we could always be on top, but unfortunately another car crashed into me in the second-to-last corner and gave our chances for pole away.”

The stewards noted that “during the hearing, the driver of Car 6 [Bearman] explained that he was preparing for a fast lap and was on the dry line of the track at Turn 17. He did see Car 20 [Vidales] behind him approaching with a faster speed, however he continued to drive slowly on the ideal line.

“The driver of Car 20 confirmed that he was on a fast lap and had to brake to avoid a collision with Car 6. Having considered the matter extensively, the Stewards determined that Car 6 could have reacted differently and thus did impede Car 20.”

Bearman qualified fifth, which put him eighth on the grid of the reversed grid sprint race on Saturday. His penalty means he will now start 11th for the first race of the weekend.

Vidales said on social media: “It was not our day. We came [close to] a top-five lap until traffic on the penultimate lap, a nail in the rear-right wheel that forced us to do the entire free practice and time with the same [set of tyres]… and still, we fought.”

There was worse to come for the Spaniard, as during the incident with Bearman he impeded his own team-mate Hunter Yeany and copped a three-place grid penalty that puts him only ahead of Trulli.

Carlin’s Zak O’Sullivan also got a three-place grid penalty, as he impeded Van Amersfoort Racing’s Reece Ushijima. Having gone eighth fastest, he will now line up eighth for the sprint race.

The same penalty for the same offence was given to Charouz Racing System’s Enzo Fittipaldi and VAR’s Jake Hughes in Formula 2 qualifying, leaving them 18th and 20th on the sprint race grid.