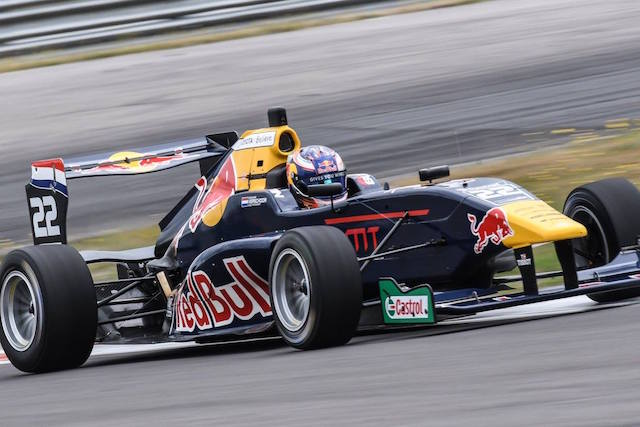 Pedro Piquet?followed his race one win with third to grab the championship lead, one point ahead of erstwhile leader Thomas Randle, who recovered from an off to finish fourth, and two ahead of Verschoor.

The reverse-grid draw put Verschoor on pole after fourth in race one, and the Red Bull Junior?kept the lead at the start ahead of Ferrari recruit?Marcus Armstrong.

The race was then suspended after a second-lap clash that put?Enaam Ahmed off track and out of sixth, with?Christian Hahn suffering front-end damage as a result.

Verschoor kept the lead at the restart, which was quickly followed by another safety car period after an off?for?Kami Laliberte.

The race then remained under green from the lap nine restart until the chequered flag at the end of lap 15, and Verschoor managed to stay ahead of Armstrong throughout, beating the Kiwi by 0.8 seconds at the flag.

Race one winner Piquet?took third from?Jehan Daruvala at the start, although couldn’t keep up with the two ahead of him, finishing 3.3?seconds back from Verschoor.

Left fifth on the grid by the top four being reversed, Randle fell to 11th after going off track on the first lap, but he survived the skirmish ahead to be seventh at the red flag.

He passed Taylor Cockerton?in the brief green-flag running before the second safety car, got by Daruvala following the restart and pounced on?Ferdinand Habsburg on the final lap for fourth.

Daruvala ended up seventh behind Cockerton and ahead of Brendon Leitch – who returned to action after his race-one summersault -?Luis Leeds and?Jean-Baptiste Simmenauer, with the French karting graduate scoring his first top-10 finish.

It will be Daruvala on pole for the Grand Prix, in front of Piquet, Randle, Armstrong and Verschoor.