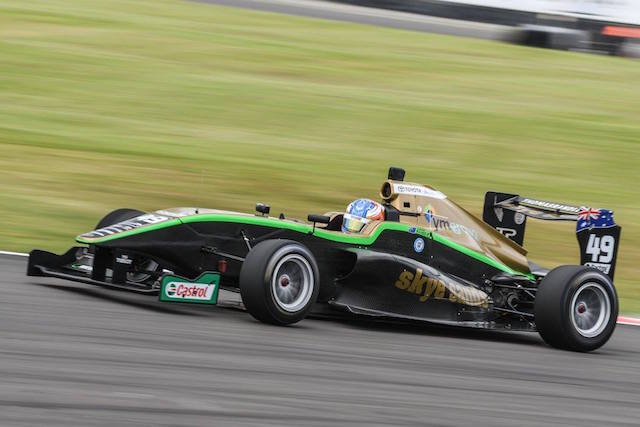 Thomas Randle has claimed the Toyota Racing Series title after beating Pedro Piquet to third in a New Zealand Grand Prix led from start to finish by Jehan Daruvala.

Randle had slipped a point behind Piquet following race two of the weekend at Manfeild, but made a decisive move for the championship on a restart following an early red flag.

At the start, polesitter Daruvala had kept the lead ahead of points leader Piquet, whose position had been strengthened by Marcus Armstrong passing Randle for third and Richard Verschoor – only two points behind the Brazilian after his race two win – slipping to sixth behind Keyvan Andres.

An first-lap incident involving Christian Hahn and Luis Leeds then triggered the race suspension, to allow the cars to be recovered.

At the restart, both Armstrong and Randle found a way past Piquet, while Verschoor was able to regain fifth to regain contact with his rivals.

Randle quickly set three consecutive fastest laps to build a second’s margin over Piquet, which he was able to maintain over the remainder of the 35-lap distance.

Verschoor meanwhile, as has often been the case over recent races, was unable to keep pace with the M2 Competition drivers and Victory Motor Racing’s Randle in his Giles-run car, eventually finishing 5.8s behind Piquet.

Finishing ahead of his rivals ensured that Australian Randle – whose current programme for the rest of 2017 is in the new British LMP3 Cup – claimed the championship.

Out front, Daruvala’s lead went as far as 1.6 seconds as the Force India protege set a high pace in the early part of the race.

Armstrong responded in the second half, cutting his deficit to as little as 0.722s, only for a couple of slow laps to to put the gap back at 1.6s.

That difference reduced again in the closing stages, but Daruvala did enough to finish up 0.855s clear.

Second for Ferrari recruit Armstrong was however enough for the Kiwi to hold on to fourth in the standings ahead of Daruvala.

Brendon Leitch was?on course for sixth until dropping out with three laps to go, handing the place to?Enaam Ahmed.