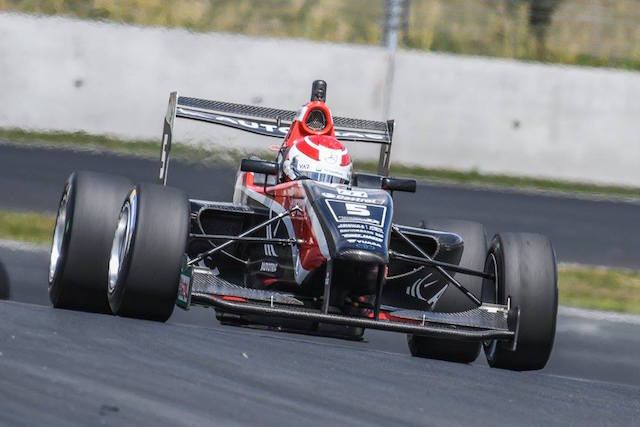 Pedro Piquet scored another victory in the opening race of the final Toyota Racing Series round at Manfeild to move firmly into title contention.

Piquet grabbed the lead at the start from M2 Competition team-mate?Jehan Daruvala, who had earlier claimed double pole for race one and Sunday’s?New Zealand Grand Prix finale.

The race was then red-flagged after a big crash on lap two for?Brendon Leitch, who was sent into a roll after hitting?Keyvan Andres, who had clashed with?Luis Leeds.

After the restart, Piquet was able to quickly open up a gap over Daruvala, and finished up 4.325 seconds clear after 20 laps.

Marcus Armstrong completed the podium, a second further back.

Piquet is now only 15 points behind leader?Thomas Randle, who finished fifth behind erstwhile rival?Richard Verschoor.

Verschoor had outqualified Randle by two places, and?Harry Hayek remained inbetween the pair after the start, but Randle cleared his fellow Australian following the stoppage.

He then set the fastest lap in his pursuit of Verschoor, and spent most of the remaining laps within four tenths but had to settle for fifth.

Verschoor takes five?points out of Randle’s advantage, with the gap between them now at 22 points.

The draw for the race two reverse-grid?has offered a further twist, putting?Verschoor on pole with Piquet fourth and Randle fifth.

Enaam Ahmed finished the race in sixth in front of?Taylor Cockerton, with Hayek dropping out after?the Kiwi challenged him.

Ferdinand Habsburg came from 14th on the grid to take eighth followed by Leeds and?Shelby Blackstock.