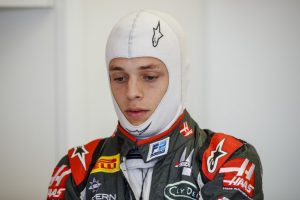 Trident is set to take court action against its dropped Formula 2 driver Santino Ferrucci, who left the team after a on-track dispute with team-mate Arjun Maini at Silverstone.

The Court of Milan has issued an order of payment for an amount of??502,000 from Haas Formula 1 junior Ferrucci, having been considering legal action since terminating the American’s contract in July.

Prior to his two round F2 ban for colliding with Maini and ?66,000 fine for driving his car in the paddock sans gloves and while using a phone, Ferrucci had made his IndyCar debut with Dale Coyne Racing, despite a lack of payment to Trident from his sponsors.

He’s returned to IndyCar since, competing in the last two races of the season with a best of 11th, and is in contention to drive with Dale Coyne again next year. Haas has yet to drop Ferrucci from his role, though has said it could if he remains in IndyCar.

Alessio Lorandi has replaced Ferrucci at Trident, and has a best finish of seventh in six races.

“Trident Motorsport informs to have obtained by the Court of Milan an order of payment for an amount of Euro 502.000, plus interest and legal fees, against Mr. Santino Ferrucci and its guarantor, an American company represented by Mr. Michael Ferrucci, in relation to the driver?s failure to pay the amounts due under the contract.

“Trident Motorsport confirms its intention to proceed with any legal action in order to obtain compensation for all damages suffered, well above the amount so far retained, as interim measure, by the Court.”