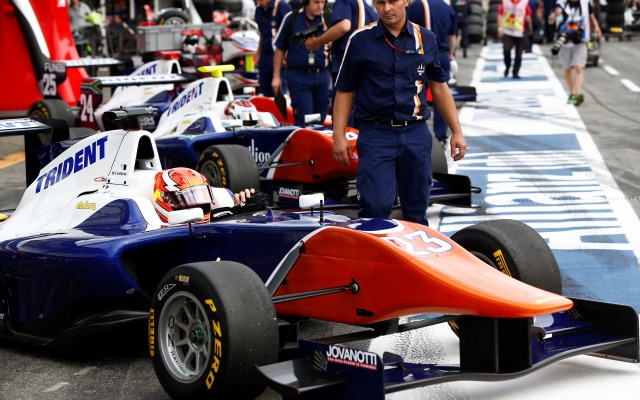 The Trident GP3 team has introduced a completely new trio of drivers for the Spa-Francorchamps round this weekend, with Konstantin Tereshchenko, John Bryant-Meisner and Luca Ghiotto all making their series debuts with the Italian outfit.

Russian driver Tereshchenko, 20, is racing in Euroformula Open this year for Campos Racing, and sits sixth in the points with one podium. He previously spent two years racing in Formula Renault 2.0.

Bryant-Meisner makes the switch to GP3 after ending his FIA F3 European Championship campaign with Fortec prior to last weekend’s Nurburgring round. Driving for Fortec Motorsports, the 19-year-old Swedish driver scored a best result of eighth.

He now follows in the footsteps of Mitch Gilbert, who is managed by the same ADD Motorsports firm as Bryant-Meisner, and who made the switch from Fortec’s F3 team to Trident’s GP3 squad for the events at Silverstone, Hockenheim and the Hungaroring.

Italian Ghiotto, also 19, has been taking part in Formula Renault 3.5 this year with Draco, claiming a fourth place at Monza and a sixth at Spa. He previously finished second in the Formula Renault 2.0 Alps standings in 2013 and in Formula Abarth in 2012.

Gilbert and Roman de Beer raced for Trident in the Hungaroring, while Victor Carbone vacated the third seat prior to that event.

The new Trident trio join Kevin Ceccon as additions to the GP3 grid for Spa.

Rossi gets last-minute F1 race debut at Spa with Marussia