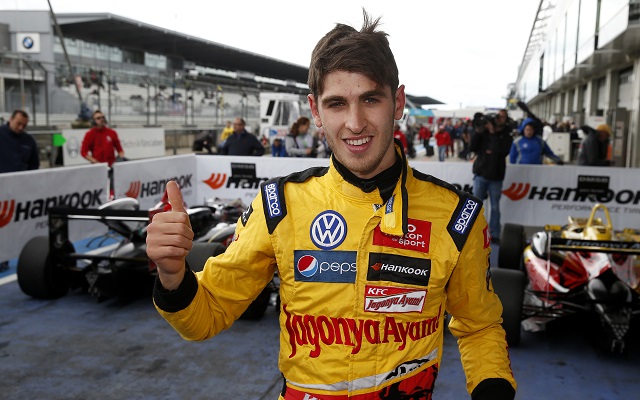 The 2014 grid of the FIA Formula 3 European Championship is, no doubt, among the best the series has ever seen, filled to the brim with F1 teams’ prot?g?s, regional F3 and FR2.0 stars and extremely capable series veterans. Figuring among the frontrunners here usually means that you’re extremely talented, while even winning individual races is no small feat.? The often overlooked Antonio Giovinazzi is among the select few to fall under the two categories as he sits in sixth in the standings after claiming his first two race victories in the past two rounds.

The Italian began to race karts competitively at the age of seven, working his way up the local ladder with several titles in the Apulian Regional Championship and several major victories on the national scene in the 60 Mini class prior to his move to European karting. He competed in KF3 tournaments from 2007, learning the ropes on the international scene while continuing to impress in his native Italy. A move to KF2 followed in 2009, where he delivered results right away, including a third place in the prestigious Trofeo Andrea Margutti.

That very year, he joined the Sean GP squad formed around Indonesian youngster Sean Gelael. The duo continued to do certain karting events in early 2012 but, more importantly, were both making the jump to full-time single-seaters in the Formula Pilota China series.

Giovinazzi’s first full campaign in single-seaters got off to a good start. He was on the podium in the first race of the season and, having finished every race of the first two rounds in the top four, leapt into the lead of the points standings with two wins at Ordos. 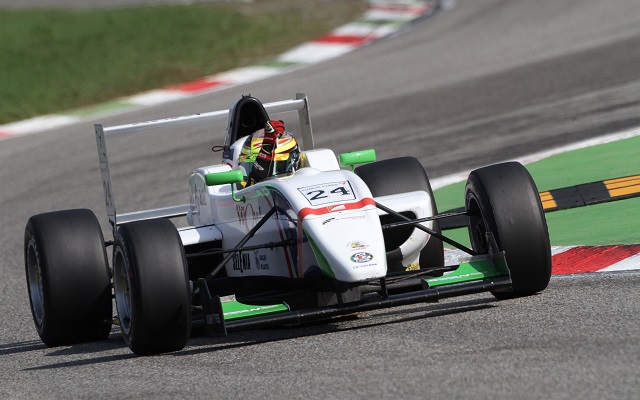 Giovinazzi stole the show in the action-packed finale of the 2012 Formula Abarth season (Photo: ACI Sport)

Whilst still in the lead of the FPC standings, he came over to Europe to participate in the final round of the Formula Abarth series at Monza. Despite the championship’s strong grid, Giovinazzi nearly managed to fully upstage the title fight. Starting from 15th on the grid, he fought his way up to win his debut race. He finished second in the reverse-grid race two and then narrowly managed to steal another victory in the series finale.

After his Abarth success, Giovinazzi went back to to FPC in style, winning four races in a row in the two final rounds at Sepang and sealing the series title.

In 2013, Giovinazzi had originally signed on to do British F3 with Double R Racing alongside Gelael. However, when that series’ calendar was slashed to four rounds, the duo joined fellow rookie Tatiana Calderon in Double R’s FIA F3 lineup.

In the rebranded European F3 series, Giovinazzi was the best of the team’s three rookies in terms of results, contending for points from the get-go, but had to wait until round four at Brands Hatch to finally score.

Meanwhile, his British F3 campaign got off to a better start – Giovinazzi immediately thrived within a smaller grid and quickly became a race winner in that championship, winning the reverse-grid race two of the season opener at Silverstone.

In the European championship, he became more competitive towards the end of the season and would go on to make six more appearances in the points, including a personal best finish of sixth in the season finale at Hockenheim. Meanwhile, in British F3, he added another spectacular win in a wet race three at Spa and continued to consistently score podiums, which allowed him to eventually finish second in the standings. 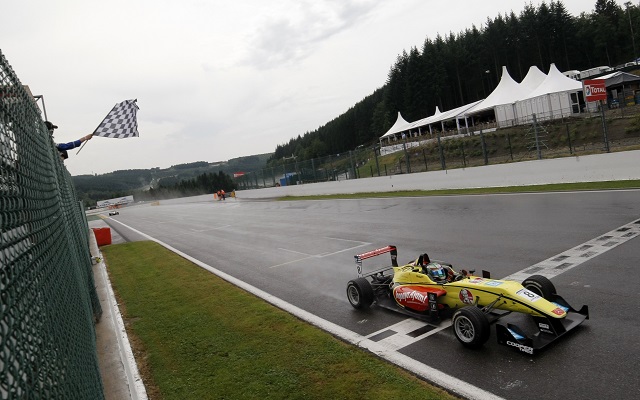 The Italian took two wins and five other podiums on his way to the British F3 runner-up spot (Photo: British F3)

After 2013, Giovinazzi signed on as part of Carlin’s six-car FIA F3 squad, flying KFC Indonesia colours alongside Gelael and their newly-signed mentor Tom Blomqvist. Both the British team and Giovinazzi himself looked great in pre-season testing, as the Italian placed in the top five in seven out of eight sessions at Nurburgring and Spielberg.

However, over the first half of the 2014 campaign, Giovinazzi somewhat struggled to convert his raw pace into actual results, mostly contending for good points-paying positions. Round two at Hockenheim, though, was the exception, as he managed to qualify within the top three for all three races and got away with his maiden FIA F3 podium in race two.

After a shunt at the Norisring, Giovinazzi had his F312 chassis changed in time for the Spielberg round, which is when he finally broke through. He took second in the opening race of the weekend and proceeded to secure pole for the remaining two outings. In race two, he led from lights-to-flag, but was penalized for a rules infringement during one of the safety car restarts. Unfazed by the loss of his maiden win, he then got the job done in race three, taking to the top step of the podium for the first time in his FIA F3 career.

The most recent round at Nurburgring continued the trend of improvement for the young Italian and yielded him another victory, which he inherited in race two when Max Verstappen retired from the lead.

There is little in the way of argument about Giovinazzi’s sheer talent – he is regarded as extremely quick both within the paddock and by outside observers. Second to none on his best day, he’s taken a fair bit of time to deliver the headline-grabbing results expected from him in FIA F3, but appears to have finally broken through. Winning in European F3 is no small task – the fact that he’s already done it twice and could’ve possibly added many more to that tally is telling. He also finally looks to be matching his squadmate Blomqvist, which is impressive, given Giovinazzi’s lesser F3 experience.

Sheer raw pace aside, he appears to be capable of producing fantastic starts, as seen in both FIA F3 and British F3. His famous Abarth one-off and his victory in British F3 at Spa suggest he’s also very good in wet conditions.

There are downsides – the Italian often seems a bit overly aggressive, which yielded more than optimal numbers of DNFs, and isn’t the most consistent driver on the F3 grid. But, on a good day for him, he’s always a force to be reckoned with, no matter the opposition.

Giovinazzi’s single-seater career has been funded by Gelael’s backers and that doesn’t look to be changing any time soon. As such, while he is likely to keep working his way up the junior single-seater ladder, breaking into F1 would probably require some significant funding of his own.

At the same time, his ties with the KFC Indonesia brand and Ricardo Gelael appear to be quite strong, which should allow him to show off his talent in major championships on the pre-F1 scene. Where he goes from that point on depends on how well he ends up doing in his subsequent campaigns. 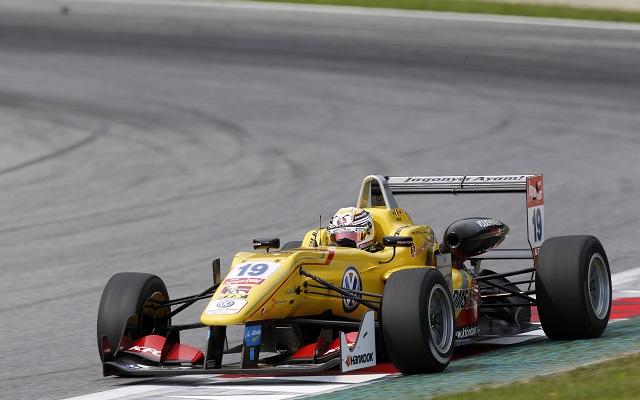