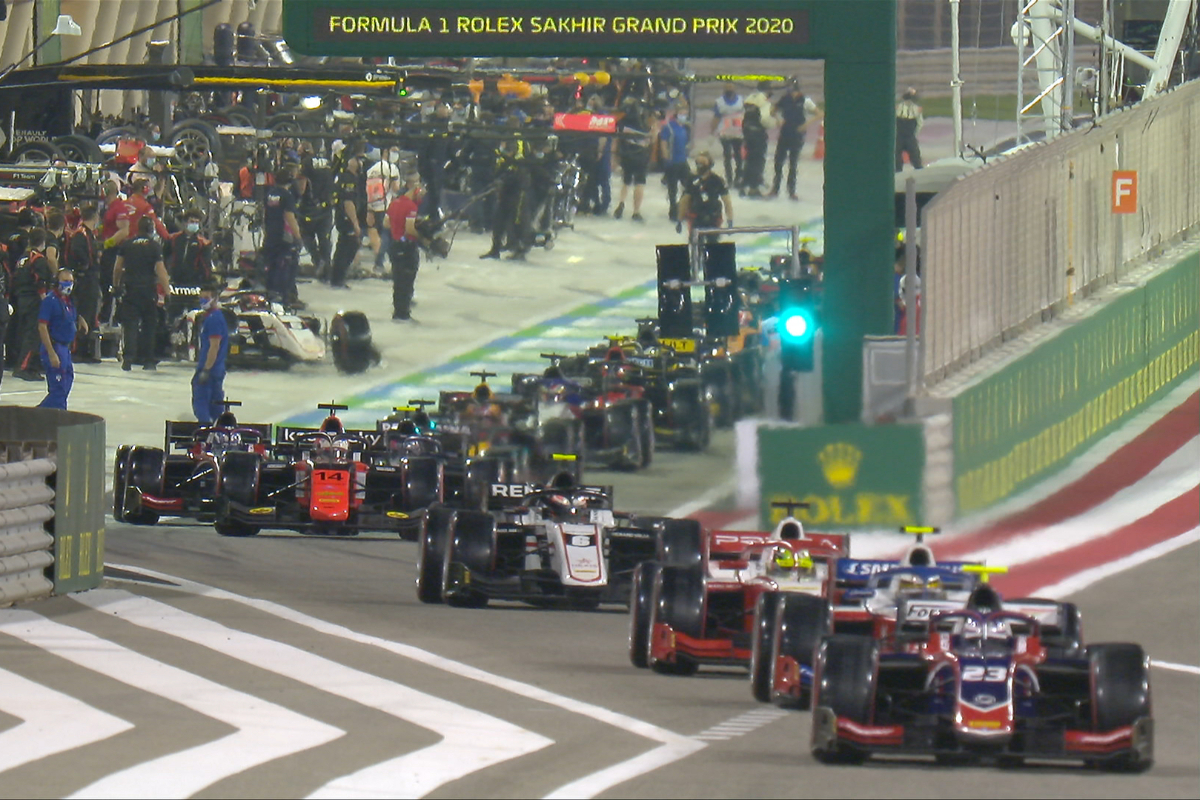 Formula 2’s season-ending qualifying session at the Sakhir Grand Prix has been described as “messy” and having gotten “out of hand” by drivers after traffic caused havoc.

Drivers often queued up behind each other on the 3.066-kilometre Outer configuration of the Bahrain circuit, with such a short lap making it difficult to find clear air unless running on track while most of the field was in the pits.

Qualifying was twice red flagged, first when Hitech GP’s Luca Ghiotto spun, and then when points leader Mick Schumacher and Roy Nissany collided. Ghiotto’s team-mate Nikita Mazepin was the first to talk about the drama after qualifying.

“You cross the start/finish line much quicker, there are also many more cars around you, and everything is just different,” he said.

“But it’s a nice challenge for everyone. And especially as it’s the closing weekend of 2020, so nice to get a bit of spice there. In regards to qualifying, I think it started off pretty calm, and it became pretty messy towards the end.”

Prema and HWA Racelab sent its cars out when most pitted to avoid traffic, and Artem Markelov claimed HWA’s best ever qualifying result in sixth. Points leader Schumacher could only manage 18th for Prema, while his future Formula 1 team-mate Mazepin qualified second.

“No, we didn’t really have a plan,” said Mazepin when asked if Hitech had considered a traffic-avoiding strategy.

“I think with the way it works in F2, unless you try to go in the middle when everyone’s changing their tyres, you just wait until somebody goes in the pitlane and then you start your engine. That’s sort of what we did, and then we just all went out at the same time.

“But luckily the team that I’m driving with is placed down the front end of the pitlane, so it was a bit easier for us than the guys to the left of me.”

Mazepin was 0.122 seconds slower than Carlin’s Yuki Tsunoda, who took pole with a 1m02.676s lap set early in qualifying. After the first red flag, the issue of traffic worsened and only Trident’s Nissany was able to improve in 19th place.

Tsunoda faced traffic “especially in the second stint”, and pointed out the “the track condition was really bad” after the stoppage.

“So that point also I had to really wait at sector two to make a gap to the car in front,” the poleman said. “The second stint for the warm-up was not great.”

His team-mate Jehan Daruvala qualified third, and reiterated what both of the drivers on the front row had to say.

“Regarding traffic in qualifying, I think at the end like Nikita said: we were all calm in the first half, then it just got a bit out of hand in the second half,” was his summary of events.

“Everyone trying to get slipstreams, being really close to each other, compromising the warm-up of the tyres, hence I don’t think many people improved.”