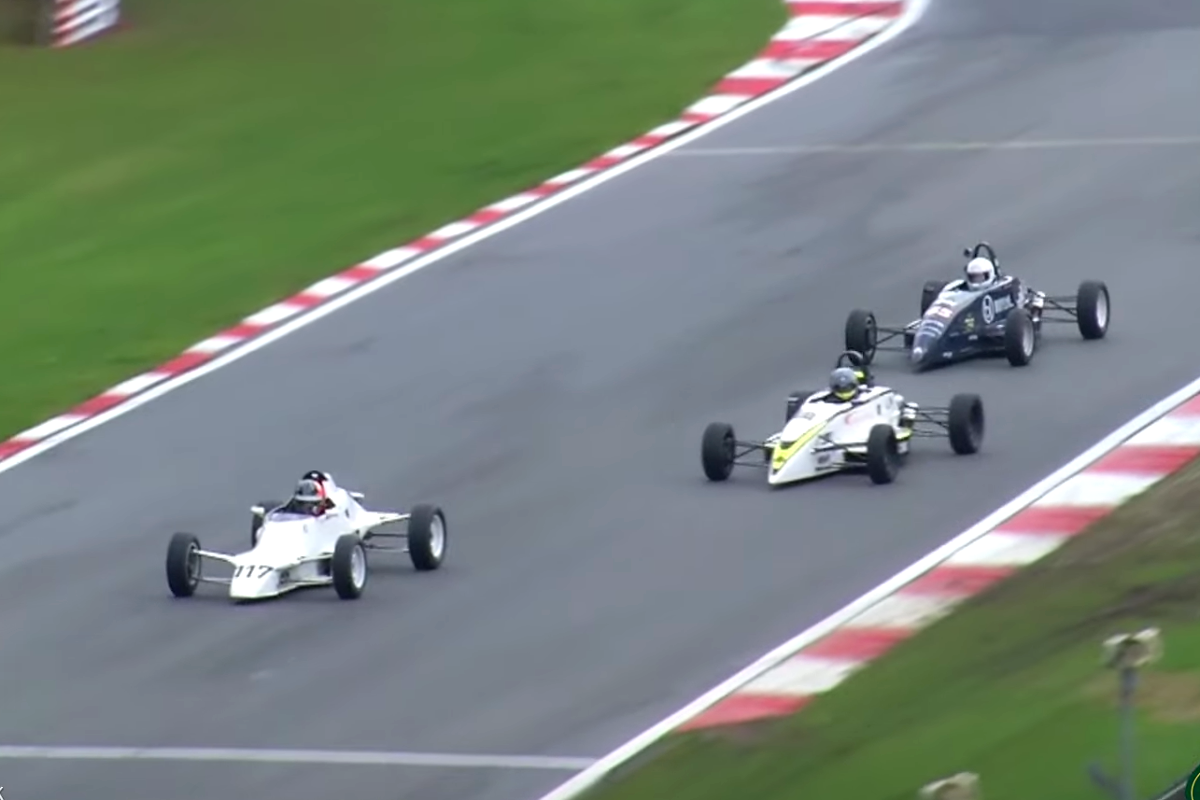 Tom McArthur was named the winner of the Formula Ford Festival Last Chance Race, which determines the final grid spots for the final, after two stoppages.

Tom Hawkins lined up on pole alongside McArthur, with Christer Otterstrom and Drew Stewart on row two.

Stewart got into immediate trouble, wheelspinning off the line then spinning off at Paddock Hill Bend with James Penrose also going off. McArthur took the lead from Hawkins, with Otterstrom staying in third and Historic final winner Cameron Jackson rising to fourth.

Before they could start battling for victory, the safety car was summoned and a slowing Chris Goodwin was rear-ended by Rick Morris as everyone backed off once they saw safety car boards, leading to two more cars needing to be recovered and red flags being waved on lap three.

The restart had the original grid order, bar the cars that had already retired, and Hawkins made a slow getaway to be passed by McArthur again. Pascal Monbaron also made a slow start from fourth on the grid, being passed by Jackson.

At Graham Hill Bend, Surtees and Clearways there was almost contact between Jackson and Otterstrom as the former tried to get past, and on lap two Monbaron started to come under pressure from Megan Gilkes.

As they started lap three, Hawkins tried the outside of McArthur at Paddock Hill to reclaim the lead while Otterstrom saw an opportunity and dived down the inside. He got a bit of loose and the reactions of the other two cars meant Otterstrom emerged in the lead ahead of McArthur and Jackson as Hawkins dropped back and then crashed out at the still damp Clearways.

Jackson wanted to make further progress on lap four and he tried to go around the outside of McArthur at Paddock Hill but lost momentum and ended up being passed by Monbaron at Druids. By the time they reached Graham Hill the race had been red flagged again, and the result was taken from the end of lap two with McArthur declared victor by 0.067 seconds ahead of Hawkins and 0.208s ahead of Otterstrom.

However as Hawkins was not running at the time of the second red flag period, it is unlikely he will line up in the final. That means the remaining drivers set to progress to the final will be Jackson, Monbaron, Penrose and Gilkes.

William Lowing is set to be first reserve, with Team USA scholar Elliott Budzinski and David Parks also hoping that people pull out of the final. Abdul Ahmed came from the back to finish only 20th after showing race-winning form in earlier races.

There were several drivers who withdrew from the Last Chance Race, enabling Ammonite Motorsport’s Shawn Rashid to join the back of the grid after he spun out of the lead in his semi-final. But he had to retire after the first stoppage.

Team Dolan’s Matt Cowley skipped the race due to a misfire that struck during the preceding Historic final.