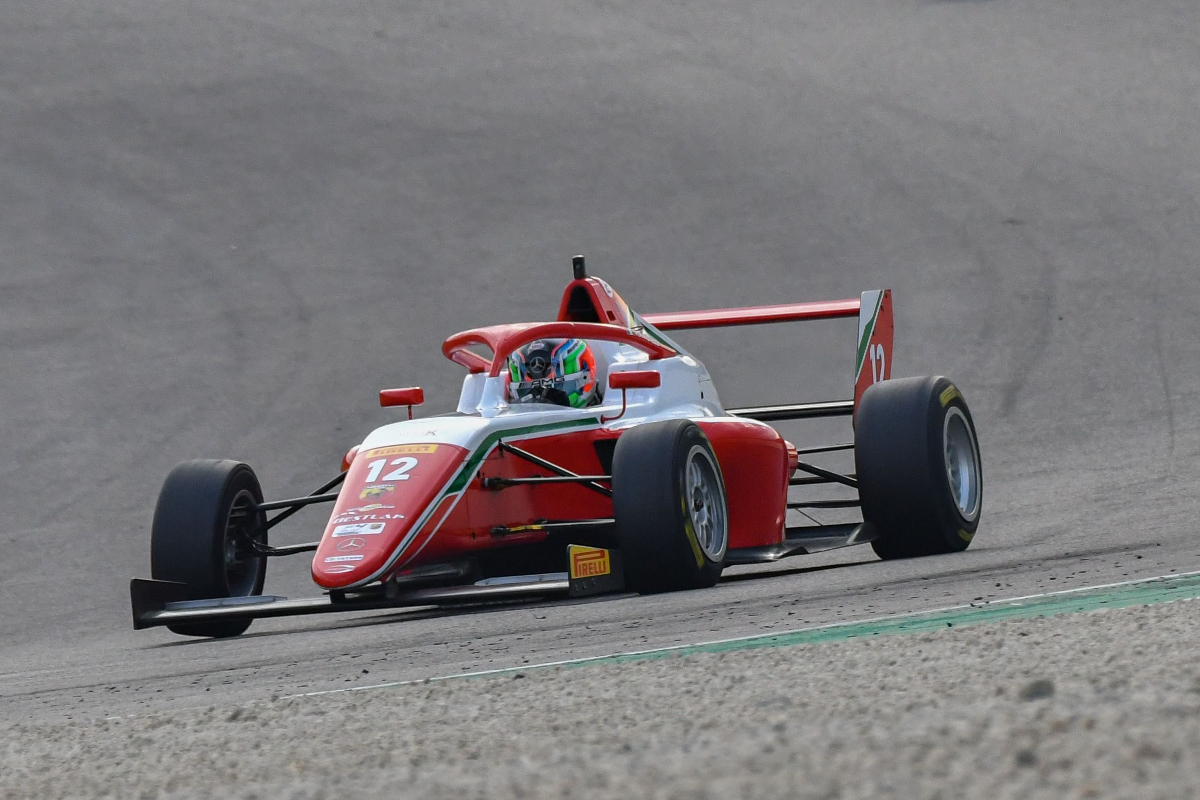 Andrea Kimi Antonelli completed his third clean sweep of the Italian Formula 4 season with his third victory of the weekend, and 13th in total, in the season finale at Mugello.

The Mercedes-AMG Formula 1 junior had to manage two safety car restarts but never looked under any threat as he cruised home 2.5 seconds ahead of his Prema team-mates Ugo Ugochukwu and Charlie Wurz.

Polesitter Rafael Camara was eliminated in a first corner incident by US Racing’s Alex Dunne, ensuring that Dunne clinched the series runner-up position despite his resulting drive-through penalty.

Antonelli made a perfect start with Ugochukwu jumping up to second ahead of Camara.

Camara’s slow getaway allowed a fast-starting Dunne to make an optimistic lunge to the inside into San Donato. Contact pitched the Ferrari junior into a spin, leaving Dunne’s US team-mate Kacper Sztuka with nowhere to go and both finished their races in the gravel trap.

The safety car was called out immediately, leading the field until the end of the third lap. Antonelli made a perfect restart, but behind him Dunne got a run on Ugochukwu into the first corner, outbraking the American to move up to second.

Dunne was judged to be at fault for the first corner crash and was penalised, which he served at the end of lap five, rejoining in 37th and last place, before retiring soon after. However, with Camara out of the race, Dunne’s championship runner-up spot was secure.

Antonelli was untouchable out front, pulling out 3.4s over Ugochukwu in three laps after the restart.

An incident between Van Amersfoort Racing’s Jules Castro and Iron Lynx’s Nicola Lacorte on the exit of San Donato brought out the safety car for a second time.

The green flag waved at the end of lap 10 with four minutes remaining, the race having been shortened by two minutes as Maya Weug had initially lined up in the wrong grid spot, necessitating a second formation lap.

Antonelli once again judged the restart to perfection, and Wurz once again tussled with Ugochukwu, pulling alongside under braking but failing to find a way past around the outside of the American through San Donato.

Behind them, Prema team-mate James Wharton locked up as a he dived to the inside of Nikhil Bohra but emerged in fifth. Bohra was demoted further next time around by PHM Racing’s Taylor Barnard, putting in another storming drive through the field from 19th on the grid.

Van Amersfoort Racing’s Martinius Stenshorne came home fourth, continuing his strong second half of the season, ahead of Wharton, Barnard and Bohra. The VAR pair of Brando Badoer and Arvid Lindblad and PHM’s Nikita Bedrin completed the top 10.