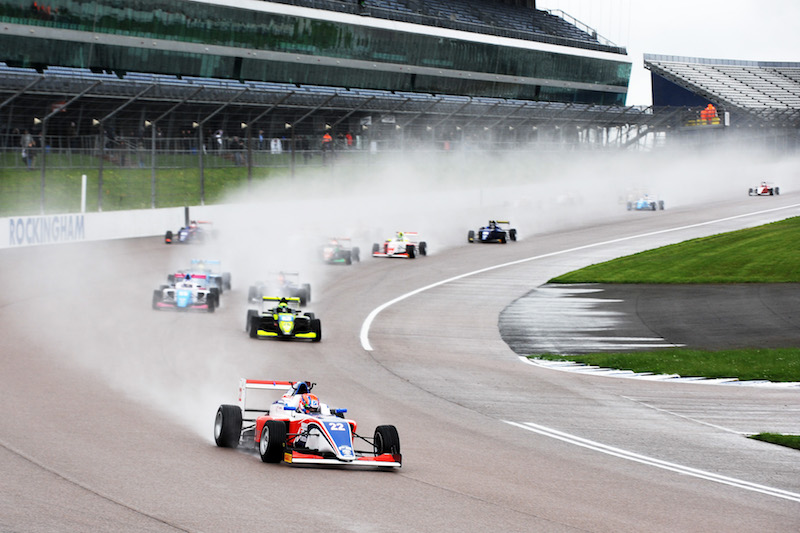 Ginetta Junior champion Tom Gamble took his first victory in only his fourth single-seater race,?and with it the BRDC British Formula 3 championship lead, in a wet Rockingham opener.

Fortec Motorsports driver Gamble took a surprise pole position in qualifying, with pole looking more likely to be in the hands of Double R Racing’s Linus Lundqvist until Gamble’s last attempt put him 0.015s ahead.

He was unchallenged at the start, but the spray behind him caught several drivers out and a safety car was required.

The safety car was out for a third of the race distance, and on the restart Gamble was once again unchallenged into the Deene hairpin.

Lundqvist had no answer to Gamble’s pace, and the latter took his first victory and an unexpected championship lead.

Jordan Cane took third at the start, with Krishnaraaj Mahadik and Manuel Maldonado slotting in behind. The trio kept their positions for the remainder of the race, with roughly seven seconds between each.

Maldonado almost lost fifth to debutant Jusuf Owega, but a last lap mistake dropped the latter to eighth behind Renault Formula 1 junior Sun Yue Yang and Kush Maini, who was the best placed of the drivers who got caught out at the start.

An incident on the formation lap and a pit stop during the safety car period left Billy Monger a lapped 14th and last, but that will put him onto pole position on the reversed grid for race two.

Carlin team-mates Nicolai Kjaergaard and Clement Novalak both retired due to first lap accidents in the rain, with Kjaergaard dropping from first to third in the standings.