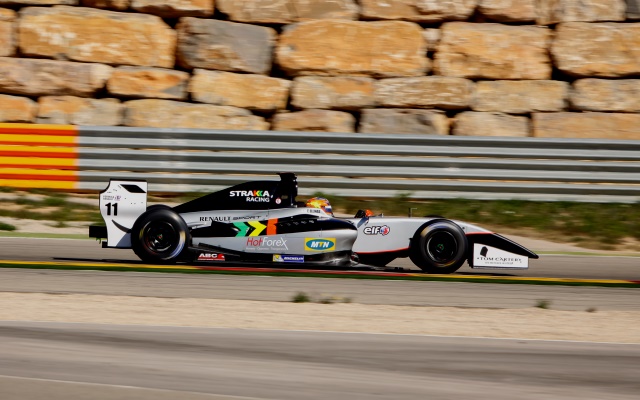 Tio Ellinas returned to Formula 3.5 V8 for the final day of the Aragon test and set the pace in the morning session.

The Strakka Racing driver, making his first appearance of post-season testing, beat Thursday’s dominant leader Tom Dillmann (AVF) by just over a tenth of a second to register the best time of the week so far, a 1m40.686s.

While rookies have shown well all week, Kevin Jorg was the only one in the top six in this session, returning to Lotus from Arden.

Carlin is back in action after missing Thursday and Dean Stoneman took fourth for the team ahead of Arden’s Egor Orudzhev and AVF’s Alfonso Celis.

Fortec tester Louis Deletraz was seventh in front of Jake Hughes, who has switched to Carlin after spending the previous four test days with Strakka.

Yu Kanamaru was ninth for Pons in front of GP3 race-winner Jimmy Eriksson, who’s taken Jorg’s place at Arden. The Swede previously tested the car with DAMS 12 months ago.

Callum Ilott is back in a Strakka car after Jack Aitken moved to Fortec, his third team in as many days, with the pair 11th and 12th respectively.

One other change to the line-up for day three is Anthoine Hubert getting a second day with Tech 1 in place of Aurelien Panis.