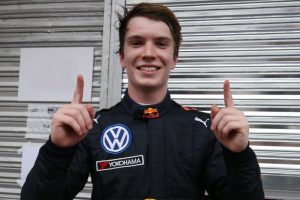 Dan Ticktum has explained the unusual incident involving a dog in the Macau Grand Prix qualification race, which led to a safety car being brought onto the track.

Reigning Macau winner Ticktum was leading the field through the mountain section of the circuit when he encountered a dog, which ran across in front of his car and was narrowly missed by the leader and the rest of the field.

“The dog. Well, I feel like somebody’s tried to set me up to try to make it more difficult for me,” Ticktum said jokingly.

“You just have to treat it like any other incident. The safety car comes out, and you’ve just got to stay calm and focus on getting a good restart and keeping everything up to temperature. Pretty interesting, but I managed to deal with it quite well. I didn’t hit it at least, so there you go. I was the first one to see it as well.”

Ticktum lost the lead of the race from pole to Callum Ilott, but had reclaimed the place within a lap with a move on the run to Lisboa.

“My intention initially was to finish in the top three, to put us in a good position for tomorrow. But it was clear in the first lap that our pace was a bit stronger. I really tried to nail the last sector, and get some good exits out of the last two corners, which I did and managed to get him [Ilott] back. It was pretty close.”

Later in the race, Ilott was overtaken by Ticktum’s Motopark team-mate Joel Eriksson, who could not reel in the leader.

“While Callum was behind I was pulling away quite easily, and to be honest I was saving tyres for the last phase of the race because last year we really struggled.

“This year the track seems to be much much better. As soon as I saw Joel behind – I think he was in the quicker car in that race – I upped my ante a little bit. It was enough to pull a little bit of a gap, and then on the last lap I cruised around.”

Ticktum will start the grand prix itself from pole, as he looks to take a second straight victory, and will have team-mate Eriksson alongside him on the front row.