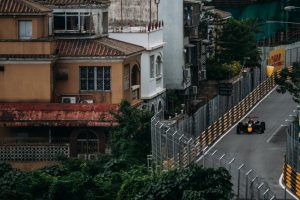 Dan Ticktum set himself up for a second consecutive Macau Grand Prix win with a controlling victory in the qualification race.

Motopark driver Ticktum lost the lead from pole at the start to Carlin’s Callum Ilott, who skimmed the Lisboa wall on exit with his left rear, but regained the position on the run to the same corner on the second lap.

Ilott initially stayed with him through the mountain section of the lap, but Ticktum quickly pulled away, and he responded to a mid-race safety car with a perfectly judged restart. He set fastest lap multiple times while up front, and took the win by 1.563 seconds.

Despite some staunch defence, Ilott couldn’t hold back Ticktum’s team-mate Joel Eriksson, who was squeezed to the inside wall down the pit straight on several occasions but managed to avoid any accidents. Sacha Fenestraz also lost a position to Eriksson, and chased down Ilott towards the end of the race.

There was a large gap to fifth place, which was held by Prema Theodore Racing’s Guan Yu Zhou until he crashed on the final lap. This promoted Jake Hughes into the position, ahead of Zhou’s team-mate Mick Schumacher and Motopark’s Juri Vips, both who had climbed up the grid.

Marcus Armstrong led a Prema trio also consisting of Ralf Aron and Robert Shwartzman that completed the top 10, with Marino Sato slipping from seventh on the grid down to 11th come the end of the race.

Alex Palou topped the Japanese Formula 3 team entries in 12th for B-MAX Racing, two places ahead of team-mate Yuhi Sekiguchi, another to fall down the order.

There were four retirements beyond Zhou, with Japanese trio Yoshiaki Katayama, Sena Sakaguchi and Ritomo Miyata crashing out, as well as Van Amersfoort Racing’s Frederik Vesti.

Early in the race a dog ran across the track in the mountain section, narrowly avoiding being run over according to television camera. A full course yellow period was implemented seconds later, and then the safety car.