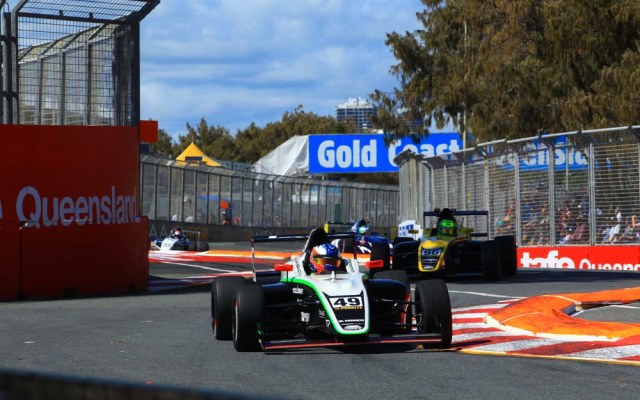 Thomas Randle made up ground on Australian Formula 4 leader Jordan Lloyd with a pair of wins on the streets of Surfers Paradise.

He led the opening race from pole position, winning by four seconds from Lloyd, who came through from fourth on the grid after a two-place grid penalty carried over from the previous round at Sandown.

Lloyd made up his two places on an aggressive opening lap, passing Tom Grech off the start and then Jimmy Vernon further around the lap despite slight contact beforehand.

Randle was already over two seconds clear by the end of the first lap, and extended his margin over the remaining 14 tours.

Lloyd and Vernon completed the podium with Grech fourth in a change of chassis after damaging his own in a heavy crash in practice on Friday.

Leeds started the reverse-grid second race from pole but was beaten off the line by a faster-starting Grech from the outside of the front row.

Zane Goddard triggered a safety car after lap two contact with the barriers, and at the restart Leeds was demoted to third behind Vernon.

Lloyd was also looking to pass Leeds but made contact, damaging his front wing and then falling behind his rival Randle.

Grech then slowed out of the lead on lap eight, promoting a battle between Vernon, Leeds and Randle to one for first position.

Randle quickly got past Leeds and eventually took the lead away from Vernon a few laps later.

Leeds passed Vernon for second by cutting the chicane, and as he attempted to move over to hand the place back, Vernon fell to fourth behind Lloyd too.

Brown held off Hayek to take fifth, with Maiolo and McGregor completing the eight finishers.