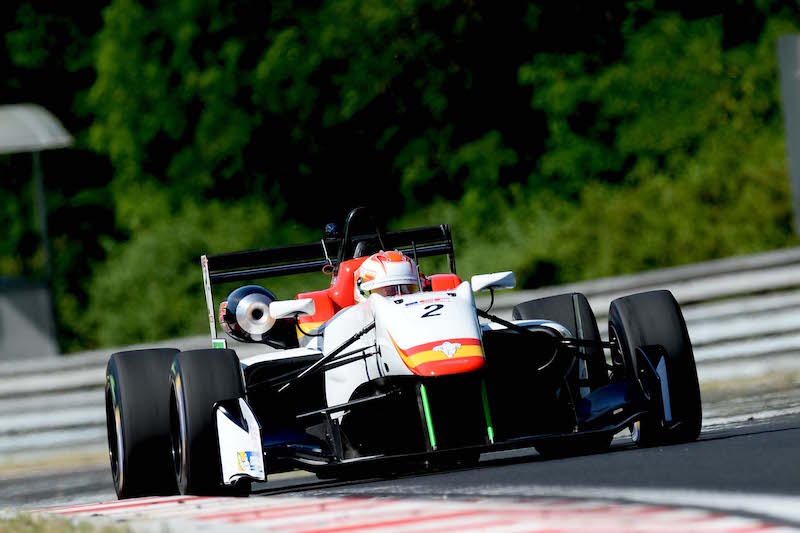 Harrison Scott?s run of Euroformula Open victories was halted at the Hungaroring by Campos?s Thiago Vivacqua in a race defined by a chaotic qualifying session.

Wet weather hit the session early on, but as the track dried out drivers were able to switch onto dry tyres. The man who made the most of it was debutant Raoul Hyman, replacing the Fortec-bound Petru Florescu at Campos.

Scott was second fastest but his best time was deleted, alongside that of Devlin DeFrancesco, dropping the pair to 14th and 17th on the grid.

The session was red flagged after a crash for Pedro Cardoso, which attracted unwelcome interest due to the unusual method of recovering the car by the trackside recovery team, with it towed up onto two wheels while the Brazlian was still sat inside.

At the start the team-mates went almost three wide into turn one, with Vivacqua taking the inside line and the lead.

Hyman dropped to third but had less threat from behind after Karkosik, Matheus Iorio and Ameya Vaidyanathan crashed into each other, resulting in retirement for Iorio and championship frontrunner Vaidyanathan.

Up front it was much the same as Vivacqua, Laaksonen, Hyman and Nikita Troitskiy lapped within two seconds of each other for the first half of the race.

Troitskiy was the only one to make a move, pulling off a stunning move on the outside of turn one for third on lap 11 of 17.

Once past he was immediately quicker, setting fastest lap but running out of laps to take second place.

Vivacqua therefore took his first victory, ahead of Laaksonen, Troitskiy and the impressive debutant Hyman.

DeFrancesco and Scott immediately jumped up to eighth and ninth at the start, but were unable to make further progress around the difficult-to-overtake-on Hungaroring.

They followed Jannes Fittje, Tarun Reddy and Florescu across the line.