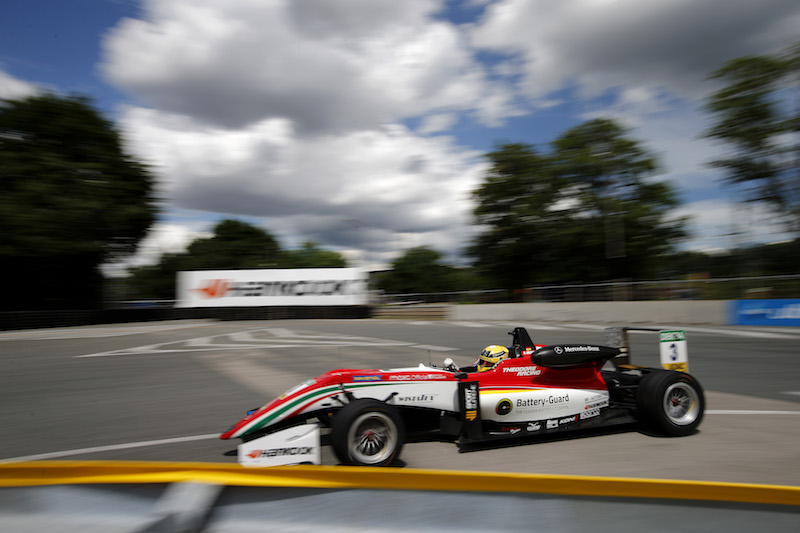 Maximilian Gunther inherited victory in the first Formula 3 European Championship race of the?weekend at the Norisring after Jake Hughes and Lando Norris came together late on.

Hughes, who had led from the start in search of his maiden victory, was defending into the first corner with only six minutes remaining when contact from Norris behind sent him into the barriers, clearing the way for Gunther to score his fourth win of 2017 and regain the series lead.

Hitech GP’s Hughes had made a perfect start from his maiden pole position, accentuated by another poor getaway for Norris, who slipped behind second-row starters Gunther and Pedro Piquet.

Carlin driver Norris got back past Piquet at the start of the second lap, and was soon running wheel-to-wheel with Gunther to the outside of the two hairpins.

His chance to get by finally came soon after a full course yellow in the middle of the race, and he was immediately able to put pressure onto Hughes, with the pair going side-by-side in the Turn 1 hairpin in consecutive laps.

A poor exit on the second occasion forced Norris to go defensive on Gunther and allowed Hughes a little breathing space, but they soon came back together, forcing Hughes to defend in the first corner.

As he braked on the dusty inside line, Hughes’ car started to slide, and although he gathered it back up again, contact from Norris behind him then send him into the barriers on the outside.

With Norris going deep, Gunther got past for the lead, and after another full course yellow to recover Hughes’ car, he held first place.

Norris had also dropped behind Piquet, and although he took second on the road with a final-lap pass, stewards handed him a drive-through penalty, which was replaced by a 20-second penalty that relegated him to 11th in the results.

Piquet therefore stood on the second step of his maiden podium, and Guan Yu Zhou completed the podium.

It also meant Joel Eriksson finished a remarkable fourth after qualifying on the back row of the grid.

The Swede quickly climbed to eighth early on, benefiting from a first-corner incident in which Ferdinand Habsburg hit Callum Ilott around, with both later forced to retire – Habsburg after also tagging?David Beckmann in a separate incident.

Eriksson?then picked his way past a battle between Van Amersfoort drivers Harrison Newey and Joey Mawson, with Mawson braking too late at the first corner in his attempts to defend from Eriksson and Newey having to go deep to avoid a collision.

Mawson continued to try to pass Newey, but this put him under attack from Jehan Daruvala, and when the?Indian looked?to the inside in the second part of the chicane, they touched, sending Mawson into the barriers and causing the first full course yellow.