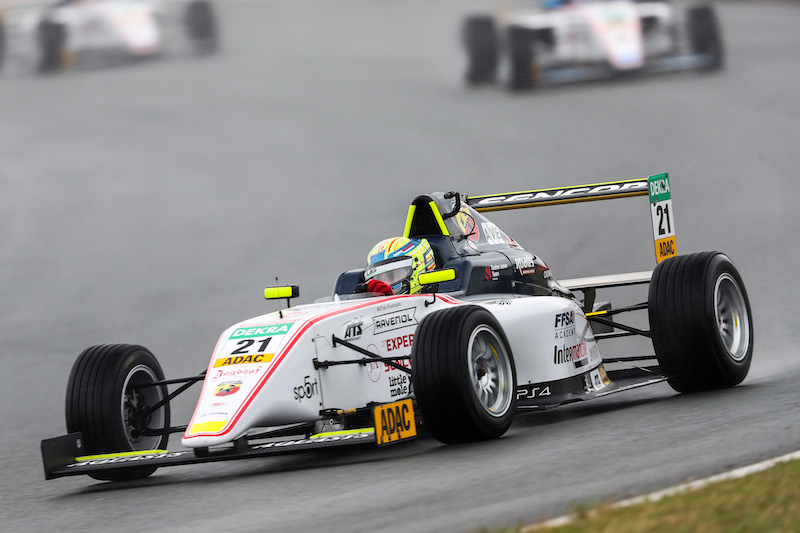 Theo Pourchaire further increased his ADAC Formula 4 championship lead with his second win of the Nurburgring weekend in wet conditions.

The US Racing-run Sauber Junior Team driver started from pole position, and although fellow front-row starter Dennis Hauger edged ahead into the first corner with a better getaway, Pourchaire then claimed the lead around the outside through Turns 2 and 3.

Hauger then spun exiting the chicane on lap three, falling down to fifth and giving Pourchaire a three-second advantage over team-mates Alessandro Ghiretti and Arthur Leclerc.

There would be no podium lock-out for US however, with R-ace GP’s Mikhael Belov instead impressing to finish in second having started eighth.

The SMP Racing driver made rapid progress, passing Ghiretti for second at one-third distance, but could do nothing about Pourchaire, who won by six seconds.

Leclerc followed Belov past Ghiretti just a few turns later to take third and limit Pourchaire’s championship gain to 10 points, with 63 points now between them.

Hauger, who missed out on a win in race one when a piece of debris caused his car to shut off, finished on the tail of Leclerc and Ghiretti in fifth.

Oliver Rasmussen was started and finished sixth for Prema, fighting back after losing three places on lap one, ahead of Joshua Durksen and Roman Stanek, who slipped back from fourth.

Gianluca Petecof was ninth while Paul Aron claimed 10th on the last lap in a battle with Hadrien David.