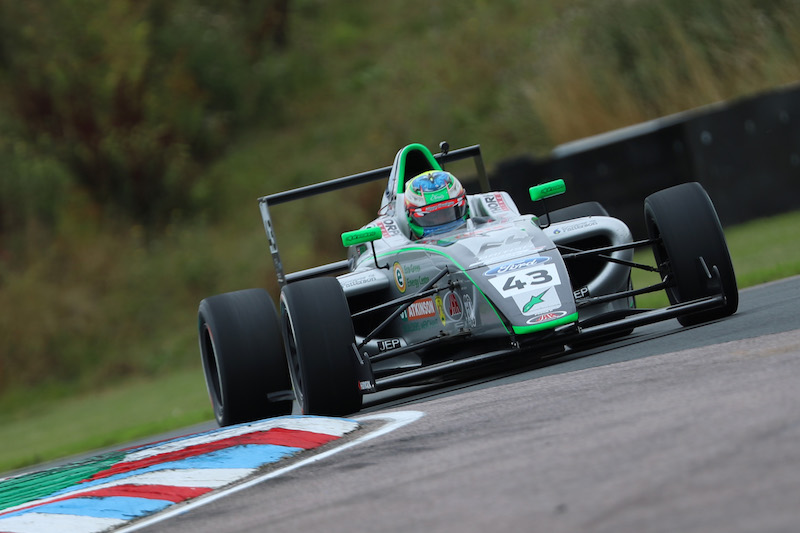 Starting from reversed-grid pole, Maloney made a good getaway to take the lead off the line, but barely had a chance to pull away before he was handed the 10-second penalty.

That promoted Tommy Foster into the net race lead, but the Fortec driver had Skelton on his tail. Foster did a good job to keep Skelton behind him throughout the race, on a track where tow is essential, but the JHR Developments driver bounced over the kerbs on the final lap to take the win.

Skelton finished just 0.435s ahead of Foster to take his first win since the shortened race at Croft before the summer break, and JHR’s second victory of the day after Carter Williams’ race one win.

Behind them, Sebastian Alvarez and Luke Browning were locked in a battle for the final podium position. The pair swapped places a number of times, with Alvarez ultimately coming out on top and eating further into Maloney?s championship advantage, which now stands at 39 points.

Maloney was able to benefit from the chaos behind him, making up positions when Williams spun at the chicane and Bart Horsten took a trip through the grass that forced the Arden driver into the pits.

Alex Connor and Louis Foster were battling for position at the sharp end of the field when they were both forced to pit with damage. Connor suffered a broken front wing and was able to return to the track after a quick nosecone change, though a deflated rear tyre for Foster knocked him out of the race.

By the chequered flag, Maloney had recovered to fifth on the corrected timings, ahead of the recovering Williams and Roberto Faria.