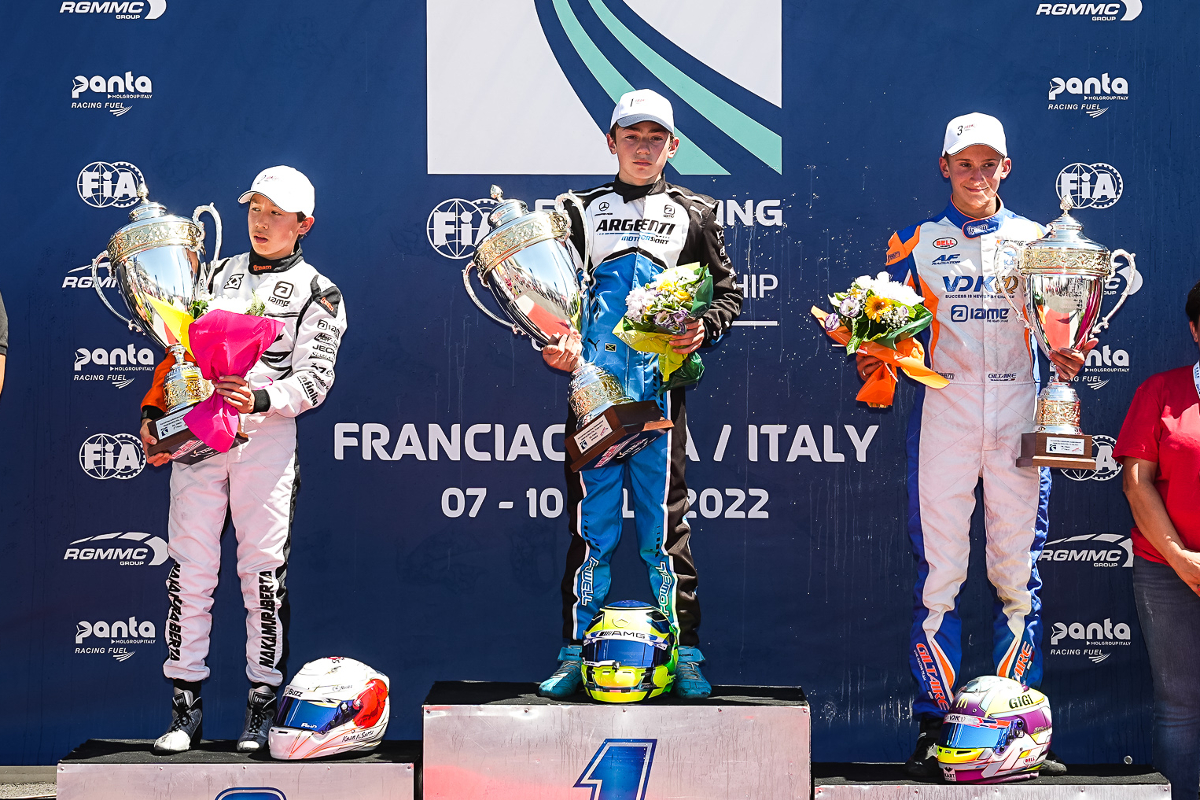 The European Karting Championship concluded in unexpected style for both the OK and OK-Junior drivers last weekend. Both had shocking ends, and the senior contest had its title decided by ‘team’ orders

Alpine Academy affiliate Kean Nakamura Berta was crowned CIK-FIA European Karting champion for OK karts on Sunday as he finished second to Kart Republic team-mate Alex Powell in the final round of the season at Franciacorta in Italy.

However it was Mercedes-AMG Formula 1 junior Powell who had been set for the title until lap 22 of 24 of the event final. At that point in the race Nakamura Berta was in third behind VDK Racing’s Evan Giltaire, but the latter suddenly slowed and waved his rival by. It meant the Alpine protege scored four more points, and as a result moved past Powell in the standings by two on dropped scores.

Neither Kart Republic driver had entered the weekend fully expecting to be fighting for the ultimate honours just between themselves, as Tony Kart factory driver and former British Formula 4 racer Joe Turney had won the first two rounds and finished seventh in the third to head to Italy with a seven-point lead.

But a title many expected to be his managed to slip further and further out of his grip as the weekend went on. He was only 10th fastest in his qualifying group (of which there are three), which meant a lowly starting position for all of his heats.

He finished fifth, seventh, 10th and fourth in his first four, then crashed out at the opening corner of the next one in a collision with Koski Motorsport’s Nico Lemberg. That meant his intermediate position in the event was a lowly 24th, while Nakamura Berta and Powell were third and 12th respectively with two heat wins each (but a retirement for Powell) prior to the entry list being combined again and then split for two super heats.

Nakamura Berta came second in his super heat, then Powell and Turney finished third and eighth respectively in the other. That in turn lifted all three in the intermediate classification, and decided their grid positions for the final.

Starting second, and earning nine championship points from all the action up to that point, was Nakamura, Powell scored two points and put himself ninth on the grid, while Turney was a points-free 20th. As a result, with dropped scores already taken into the equation the title fight looked like this going into the final and with 25 points up for grabs:

Forza Racing’s Nicolo Cuman started the final from pole, but Powell was already in the lead by lap two. He had overtaken seven karts on lap one, then dived down Cuman’s inside to get up front where he controlled the pace through the rest of the race.

Nakamura Berta did the opposite of Powell, losing four places on lap one and taking a few laps before he found a rhythm and started to regain some of the lost ground. At the same time, Turney had fallen from 20th to 34th and last place, and Powell was now set to snatch the title from him by a point.

The mid-race pace of Nakamura Berta was the best of anyone once he got into third behind Giltaire, who had started seventh and followed Powell up the order early on, but there wasn’t enough of a pace difference for an overtake. Nakamura Berta sat less than three tenths of a second behind lap after lap, but Giltaire was strong enough at the penultimate corner to deny any opportunities at one of the best overtaking spots – that is until he waved him through.

Giltaire had the pace to then almost be rubbing Nakamura Berta’s rear bumper once he was behind, but didn’t try to then get back past which made the move even odder. Had he made an illegal move earlier in the race and had to give back a position he then would have had the opportunity to reclaim second, but Giltaire’s fight for position ended there and then.

Powell looked behind and saw what was going on, and knew he could do nothing more to try claiming back the title.

Formula Scout spoke to Giltaire after the race, and he revealed “it was a decision from the team to let past Nakamura for having both titles and for Nakamura” and that he had been informed during the race “from the pit board and then to my mechanic man”.

He added: “I would definitely prefer to finished second of course and that Powell win the championship but for the team it’s the best decision.” 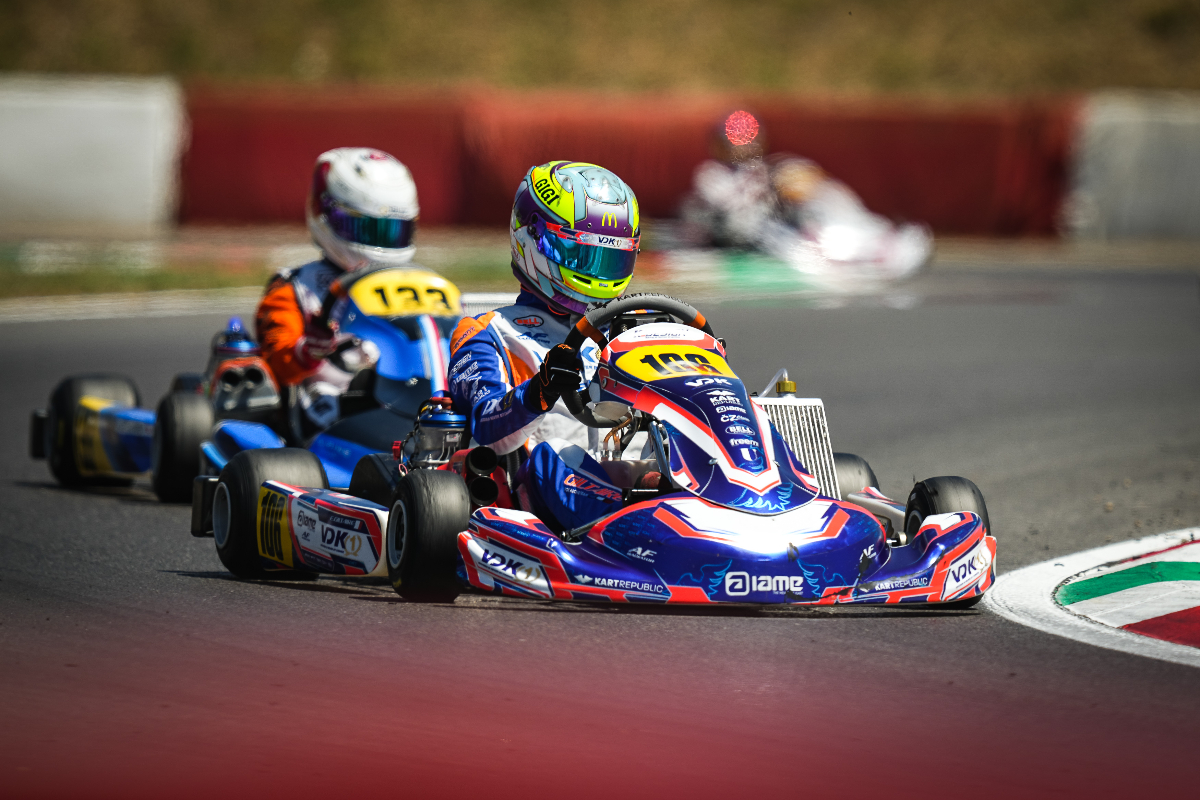 Giltaire didn’t specify which team he meant by that, as the only obvious beneficiary was the factory Kart Republic team and not its chassis customer VDK. But because of that customer relationship, it’s reasonable to expect influence could be exerted by the factory or at least an understanding would be in place that it would be a mutually beneficial decision to make but in ways that wouldn’t immediately be felt by VDK.

But rather than assume, Formula Scout puts it questioning to VDK. And the team chose to redirect our inquiries to a video statement from Dino Chiesa that had just been put out by Kart Republic on Facebook.

“You know probably we won the European championship in the OK class, and we finished also P2. We won the race with Alex, and we complete the podium with Kean Nakamura and Evan Giltaire from VDK. And I am very happy,” said Chiesa.

“We missed the cherry on the cake because unfortunately we had to decide during the race [for] Giltaire to lose the place to Nakamura Berta, but it’s just to be sure we can win the title because we didn’t know if Powell is perfect with the kart [or] we have some front fairing problem or something.

“And then I prefer to take this decision. I know I penalise Alex because like this he lose the championship. For me, both are my champion, but at the end from the team [point of view] I have to decide, and like this I am sure I can win the championship and I can finish in full podium the last round.

“I think Alex, and Kean, and Evan probably also in my opinion, have a very long career [ahead of them]. 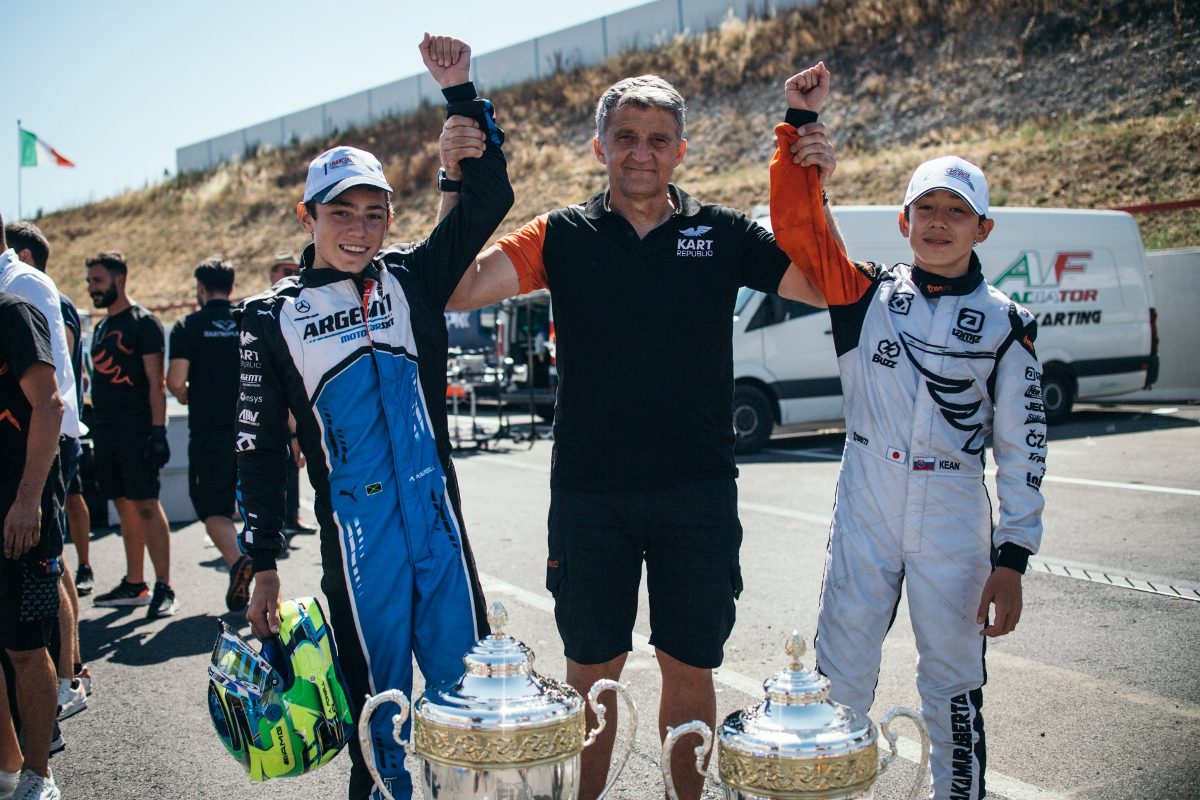 “Anyways, it’s racing, it’s a part of racing, and I’m very, very happy for both and the work that both did for the team because at the end it’s two rookies. To finish P1 and P2 in the championship, for me, for the team, for everybody that works with me, is so great a result. Thank you to everybody.”

In addition to that statement, he was also interviewed by FIA Karting and said: “The European competition has not always been very favourable to us. This afternoon we had two drivers capable of winning the title. I didn’t expect this situation and had to make a quick decision to preserve the team’s chances.

“I didn’t want Nakamura’s determination to win in the last few laps to deprive us of a good result. It’s tough for Powell, but I’m sure he’ll get more opportunities to win titles as he deserves. To achieve a double in the European Championships is very important for us, it’s a team strategy.”

Formula Scout reached out to Powell but could not get a comment, while Nakamura Berta in his champion interview said: “It was a really tough race with a lot of contact between the drivers. I was confident before the start. I thought that the main difficulty would be not to lose too many places at the start from the outside lane.

“I didn’t expect Alex to be so fast. It was a game-changer, I had to finish second. In front of me, Evan was not going to be easy to pass. A team instruction was given and he let me pass. I understand that this is a difficult situation for Alex, I am sorry for him.”

Powell and Turney were actually the only two drivers to win European championship rounds this year, while Nakamura Berta had one second place to his name before the switch with Giltaire. Had that not occurred he would have come third in the standings, and it still would have required Turney – who finished 25th on the road and was eventually classified 21st once penalties for others were applied – to be seven places higher and 6.336s further up the road to beat Powell. That being said, without the dropped scores rule the title gap would have been 19 points rather than two. 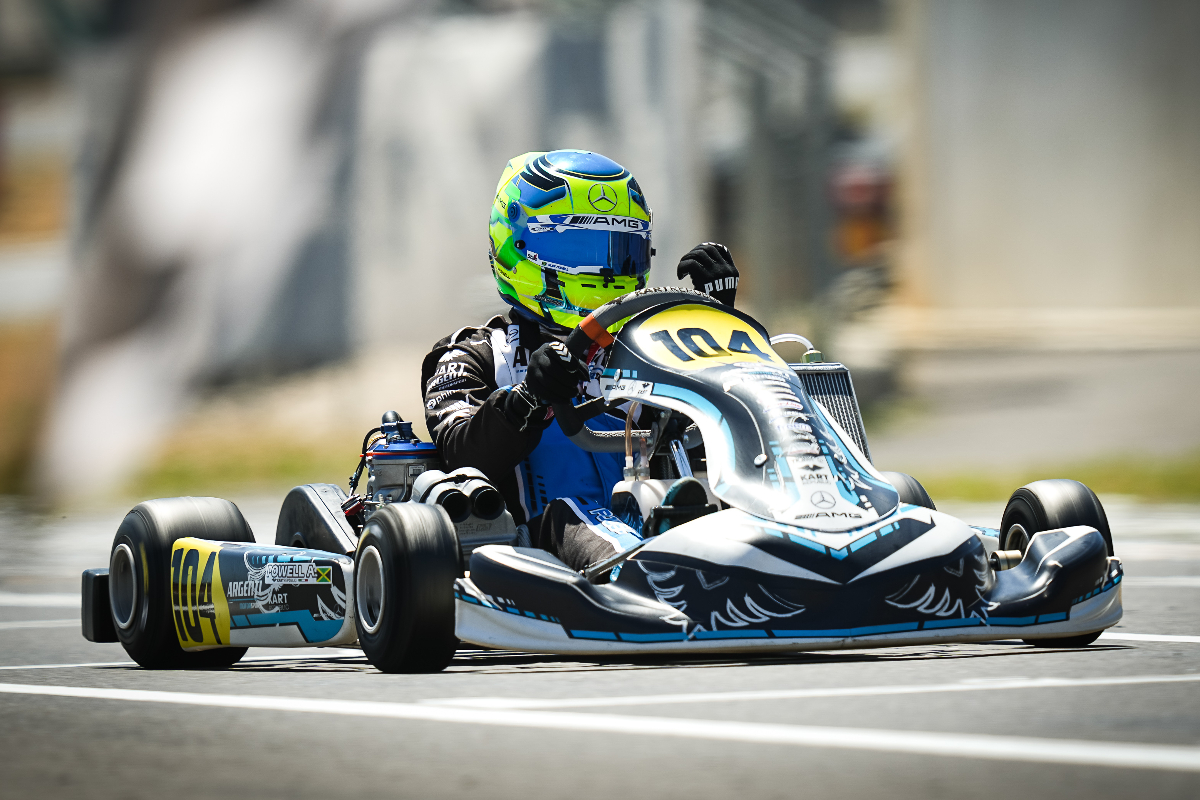 Straight up, Dino Chiesa’s excuse does not cut it. The reasoning makes sense, and the timing of the move too given the intention was to secure a result that already looked likely, but this is not Formula 1. The drivers involved are in their early teens, and are competing in what is arguably the biggest championship of their life up to this point.

Yes, the CIK-FIA World Karting Championship is the one they all want to win, but that’s a one-off event and it’s being consistently at the front over four rounds as in the European championship that’s arguably more impressive and has a bigger sway on who goes where in the karting driver market for the next year than a name-making world championship win.

It was half an apology from Chiesa to Powell, his own driver, and seemingly no sympathy to Giltaire who was the driver who actually had it worse. One: he had to give up a position in a race he was performing very strongly in, two: he was essentially being coerced into doing something by the boss of another team, and three: it put an insane amount of pressure on his shoulders once the message came through. Chiesa’s statement made it sound like Giltaire’s career prospects were an afterthought.

Beyond the title implications, Giltaire did not know what the repercussions could be of moving out of the way and no doubt would have had a lot racing through his mind once he was given the clear instruction.

Ignore it and he may have faced a telling off from his VDK Racing team, or even Kart Republic, but would then have been without the media scrutiny that now exists. But by following the instruction, he was enabling a rival team to influence a race in a way that could have – and may still – bring in an investigation into those actions and punishment for the people involved, and also changes to stop similar team orders taking place in the future.

Of course none of this is new to karting, which is increasingly political and dominated by a few very influential names, but now there’s an asterisk hanging over an otherwise well-driven campaign by Nakamura Berta and Giltaire’s racing future isn’t necessarily going to be helped reputation-wise for whichever teams he joins next in karting and maybe one day cars given he followed VDK’s instruction (even if he didn’t know it was coming direct from Kart Republic).

And when Chiesa says “it’s a part of racing”, he’s effectively saying “I will do anything to win”.

If he was purely in the position of manufacturer boss, it would make it more excusable to influence customers for the good of the brand, but when Chiesa is also team boss of his factory squad, should he be able to do that to a team that is also a competitor? It will be very interesting to see if the governing body reacts to this incident in any way…