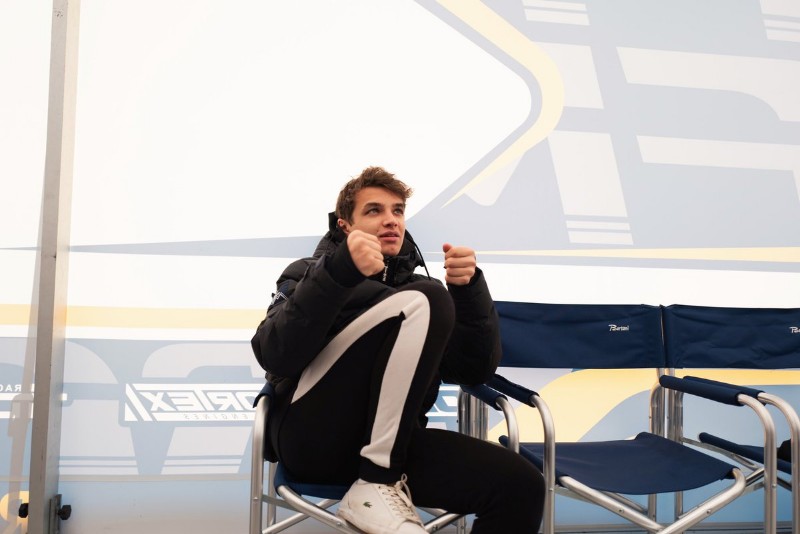 Ahead of making his Formula 1 race debut this year, Lando Norris tested some of the machinery that he raced the last time he entered – and won – a world championship.

Like F1, it required a lot of driver skill, and was physically and mentally tiring after more than a handful of laps. After his first day of testing, he was found fast asleep in a hotel reception: absolutely shattered by the effort he had put in.

What Norris was driving was not a high-powered single-seater, but a 125cc KZ go-kart.

One of the most successful teams in modern karting is Ricky Flynn Motorsport, and the British squad is best known for winning the 2014 CIK-FIA KF Karting World Championship with future F1 star Norris.

It’s won two further senior international titles, as well as 16 in the junior ranks. On a national level, the titles continue to add up. And if you’re aged 11 or above, you could add to those titles in the future.

“We’re basically the first step on the ladder for the youngsters in their racing career,” says team principal Ricky Flynn.

“We’re trying to hone them, teach them, educate them on all the aspects of racing. Data acquisition, racing lines, racing etiquette, and obviously trying to win races with them – in preparation for them moving onwards and upwards to their ultimate goal: F1.”

Flynn himself traded that path, beginning in 1983 as a karter, then progressing to Formula Renault UK, at which points the costs became too much and he fully committed himself to running karters, a profession he had already begun.

Ricky Flynn Motorsport (RFM) began in 1994, and was already running a international operation by the early 2000s.

“Once you’ve been racing and you’ve got that in your blood, it’s difficult to get rid of it. I stopped racing and didn’t really want to give up being around racing, so continued in a different vein but still with that competition in mind. The will to want to win, to be the best at what you’re doing, and try to achieve the world titles and all the other titles that go with it.

“It started out quite small in 1994 [in the British championship], and has progressed to this stage; which is that we take on every team which we can, wherever we are around Europe or around the world.

“As you can see from the results on track, we’ve got some outstanding drivers that are coming through. Some are in their first year with us, some in their second year, some are in their third year in Seniors. We’ve got some extreme bright talents in here that I’m sure will be making a good career in motorsport later on after they leave us.”

While RFM doesn’t provide media and fitness training – it directs all of its drivers towards individuals who can – there is still a huge focus on preparing drivers for their next career step as much as optimising what they currently race in. The one driver who “springs to mind” to Flynn in reaping the rewards of that approach is McLaren F1 driver Norris.

The 19-year-old tested with the team at Italy’s South Garda circuit this February to prepare for the Australian Grand Prix, driving one of the kart’s built by McLaren stablemate Fernando Alonso’s business, and had quite the experience.

“It was quite nice to have him back under our roof for a couple of days testing, with no pressure, no racing,” says Flynn. “Just sharpening him up in readiness for his 2019 season.

“I think if you speak to the drivers, and you listen to old F1 drivers too, they never experience the grit and everything else that karting gives you, until they get to F1.

“It’s such a physical lap, such a busy lap, that it really sharpens the mind, sharpens the reflexes, sharpens everything. The lap is obviously quite a short in comparison to F1 too. It’s really great preparation, because there’s no rest out there for them. If they’re doing a 20-lap stint, it’s basically 18 minutes of extreme hard work for them.”

“It’s going alright, I’m a bit tired already,” Norris said on his YouTube vlog after his first few laps back in the kart, and the first time he’d worked with the team since his 2014 world championship success.

Karts still use shifter gearboxes, which can take time to adapt back to from the semi-automatic paddle shift and hand-operated clutch systems of top-line single-seaters. To engage gear, karters have to lift off the throttle, but without losing momentum or position in races that usually include more than 30 entries.

With such short laps, and the high frequency of gear changes within each lap, it’s no surprise that it’s the physical side that caught out Norris first.

“The easy part is the gear changing. All you have to do is lift, and then you can change. I’ve never said it before in my life, but I’ve got too much grip. It’s too good.

“As soon as I start turning, I start bouncing. My ribs hurt, and my back hurts, and my neck hurts, my legs and basically everything. I have many bruises on my body right now. But it’s all part of it, so lets go again.”

Flynn picks up on the story at the end of Norris’s first day back in a kart.

“When we got back to the hotel, he was actually asleep in the reception, within 20 minutes of getting back there. That tells you that he worked hard that day.

“They all looked – we didn’t just have Lando there, we had other [ADD Management] drivers as well that are in lower formulas – to prepare them, and they all looked like they’d been a few rounds in a boxing ring, shall we say, when they left here on the first evening.”

RFM now only races in the OK and OK-Junior kart classes, at a world and national level, and its 2019 line-up is highly rated.

Red Bull junior Harry Thompson and Kai Askey drive its OK karts, while Thomas Ten Brinke heads a six-kart entry in OKJ. The Dutchman currently leads the CIK-FIA European Championship, and was third in the WSK Champions Cup. Another of RFM’s younger stars to look out for is 12-year-old American Ugo Ugochukwu, another European title contender.

Behind the drivers is a large workforce that means RFM (and its karting opponents) rival many car racing teams on personnel numbers, technical complexity, and costs.

“Everybody’s key [in the team]. We’ve got engine guys, who are a Danish company based with us in Italy. We’ve got all the mechanics on all the karts; without them nothing ticks. Then we’ve got race engineers going through the data with the drivers after every session.

“Every driver has two karts. Generally the kart they’re racing, then the other kart can be turned into a wet chassis if it’s raining, or just as a spare chassis in case they crash and destroy one. We’re changing them regularly as the year goes on, and if you look inside our truck we have every spare part you can think of.

“I don’t know how many tens of thousands of parts we have in there, but it’s so we can be on the road [without issue]. We’re on the road for sort of three months at a time, without having to go back to base. And we have stuff shipped in.

“Back at base we have people organising to get this sort of circus to all the events – with the flights, the hotels and all the logistics. Which is again a massive, massive part of it. There’s probably, for this [WSK Champions Cup] event, in region of 27 to 30 people to make this event work as it does, as smoothly as we try and make it work.”

Karting doesn’t have the mainstream appeal it had in the 1980s, when the likes of Martin Hines became TV stars racing in superkart grand prixs, and the prices are continuously going up despite the limited technical potential karts have compared to even the most basic of cars.

Most of this investment takes place on engine-building, an area that is hugely political, and the wealthiest karters will push money into having more spare engines and tyres. Moving an increased amount of equipment around, with a ever-busier testing calendar, means costs go up even further.

“It’s very difficult, and the costs are escalating year on year,” confirms Flynn.

“[Budget disparity], that’s another part. Where there’s the driver without a budget – we’re always looking to help and achieve that with them’ make sure they can fulfil the potential they deserve and that the money isn’t holding them back in any way.”

Some of karting’s largest events – including the CIK-FIA world championships – are actually one-off events, and most karters will tackle national or continental campaigns on top of that. The WSK Champions Cup is usually the curtain-raiser of the karting calendar. 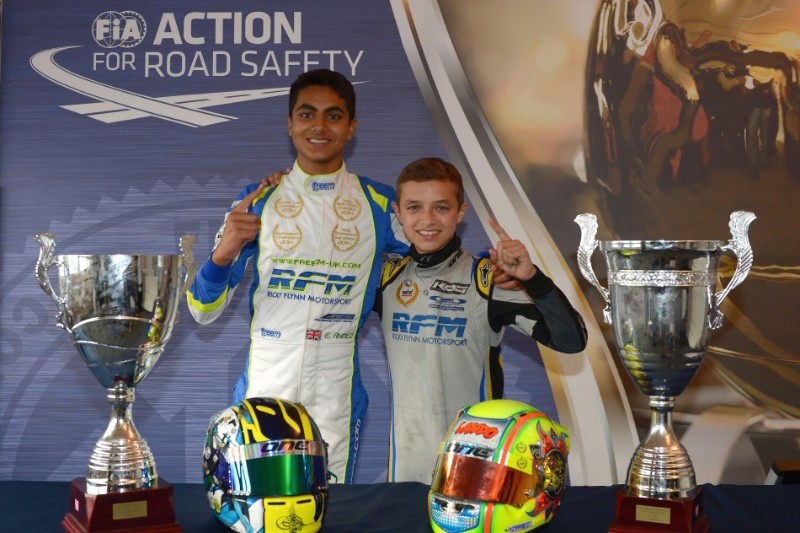 “It’s a one-off race, so lots of people can come, put a toe in the water and see where they’re at, from wherever in the world. Just put themselves against the best in the world to see whether they’re good enough to continue in the European and world level for the year, or ‘hold up, we need to have another year back in our home country doing a domestic championship to improve before we come and try to tackle these big boys on the big stage’.

“Be ready for that, rather than just wasting their time, money, effort and everything else. It’s always been a very, very big race, and as you can see the amount of entries now, it’s not changed.”

Taylor Barnard beat Gabriele Mini – proteges of Nico Rosberg and Nicolas Todt respectively – to win the OK classification of the Champions Cup, and there are several other karting names being touted as the future faces of F1.

According to Flynn, at least one of the names racing in Italy that weekend would “hopefully in two to five years going to be the next Lando Norris”.

This article was adapted from a Mobil 1 The Grid video feature. You can watch the original video below.