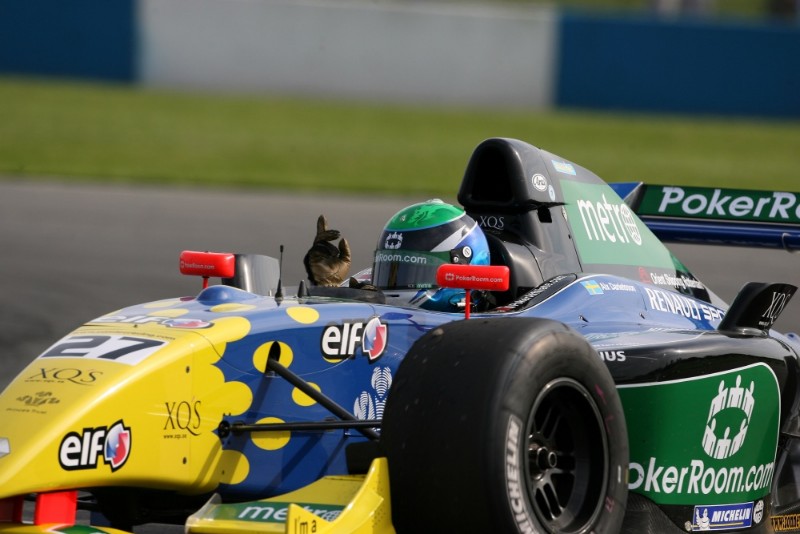 Cast your mind back to 2006 though, and the Formula Renault 3.5 title went in a direction that absolutely nobody could have expected ahead of the season, with Comtec Racing’s Alx Danielsson emerging victorious.

Comtec, headed by former factory Van Diemen team boss Jonathan Lewis, had started three years before as a Formula Ford team, picking up the embers of what was the Van Diemen team. It didn’t take long for its eyes to set on FR3.5, a championship that was GP2’s equal at the time.

It was quite the leap, but Lewis had built up a huge bank of experience heading teams in the 1600cc and 1800cc classes of FFord.

“I ended up being very lucky that I was quite successful running teams; my own teams and other people’s teams,” Lewis told Formula Scout.

“I ran Miles Johnson against Mark Blundell and Johnny Herbert and Gerrit [van Kouwen] and everybody in FF1600. We had a great time, we were just kids.

“With a brand new Reynard [at first], and then a Van Diemen, just going around the country in a van with a trailer. We won the odd race, we won some Dunlop Star of Tomorrows and what have you. Then I started running FFord cars as a business.

“Ralph [Firman, Van Diemen founder] rang me once when I was on holiday in New Zealand and asked me to run the works team. I asked why, and he said ‘just come and run it’. So I turned up at Van Diemen at the end of 1988. I knew Ralph very well, and those were the happiest years of my life.

“Running the best drivers in the world for the best manufacturer, and Ralph and I have been firm friends ever since, and [his wife] Angela.

“Because of them I now live in Norfolk, and I’ve always had this passion for Formula Ford.

As FFord switched to 1800cc regulations in 1993, so Van Diemen diversified into other categories. A taste of what could be achieved beyond FF1600 proved instrumental in ultimately how Comtec came to existence and its FR3.5 title.

“I was at Ralph’s [team] when Ralph sold Van Diemen to Don Panoz in 2002, and I knew the writing was on the wall,” explains Lewis.

“I knew that the passion had gone. And I’d already had this name in my head: Competition Technologies. Comtec. Pierre Moncheur, who was the investor, said: ‘go on, let’s do it then’. So we got a unit and formed Comtec, and ran a couple of Van Diemens for Ralph in 2002.” 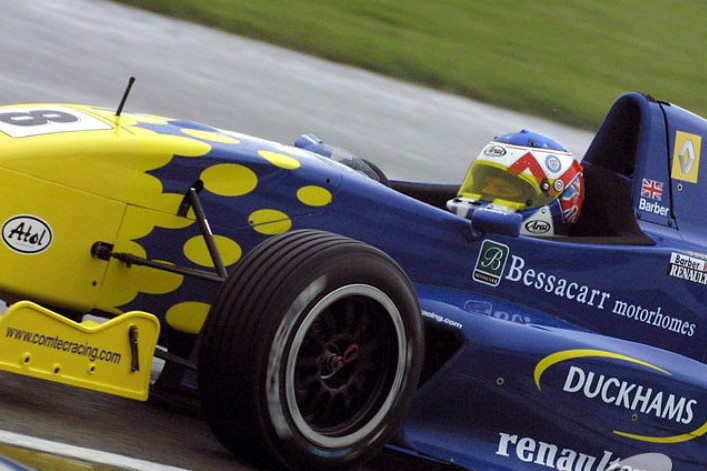 “I’d lost interest in FFord by then, and Formula Renault was the way to go. So we moved into FR2.0 UK with Susie Wolff and [Westley] Barber, and had a great season.”

Barber was runner-up in the 2004 standings, with Wolff fifth. A year later it was in the FR2.0 Eurocup, but it only managed one podium and 12th in the teams’ standings. FR3.5, populated by world class teams and brand new circuits such as Monaco and Istanbul Park, surely seemed a step to far.

“We were very lucky there was a team that was selling up called Avelon [Formula]. Pierre bought Avelon’s cars and we got them in the workshop.”

From a small workshop at Snetterton to FR3.5, just like that. Next up was building a team capable of winning.

“I always think a good team manager isn’t necessarily someone who’s a very clever person, but it’s like being a chef,” Lewis continues.

“You put the ingredients together – and I put this eclectic mix of lunatics together, with Roly Vincini as an engineer. I knew Alx Danielsson from FFord. I liked Alx, and I got him in [to drive]. We set off doing the World Series and by absolute fluke we won it.” 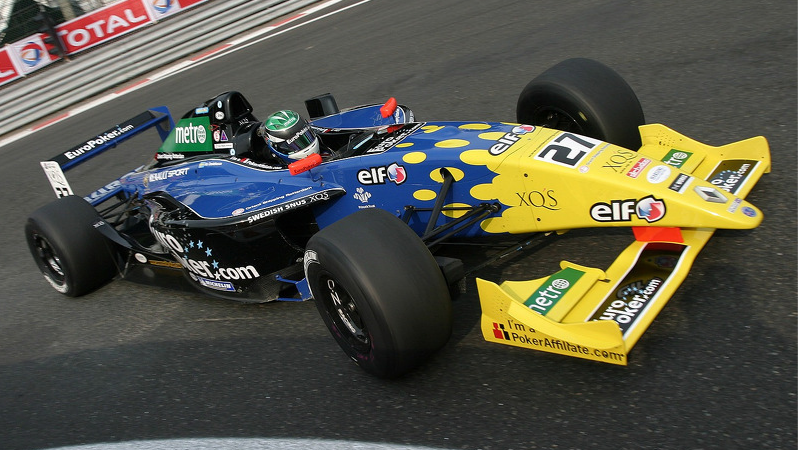 Except as Lewis goes on to explain, it was no fluke at all.

“Even I was shocked we won it, but we beat Carlin and all these great teams. It was fantastic.

“We didn’t fluke it, we worked hard. When I said we were lucky to win it, we were, but we worked very very hard.

“When we won our first race, Trevor Carlin bought me a large whisky and he stuck it in front of me and said: ‘Here you are. Enjoy that. You’re not going to get any more.’

“So when we won the championship I bought him a bottle, and stuck it in front of him and he laughed. We worked bloody hard, but so did everybody.

“But we were at the track at midnight nearly every night, working as late as you can imagine. Then we’d be back at six in the morning practicing pit stops. In the dark, before any other teams got there.

“My guys used to go: look at us, we’re the only ones here. And I told them to wait till the end of the year and then say that.”

Comtec pitstop practice was initially comic relief to the rest of the paddock.

“I was the jack man, because I was a short, stocky little fat guy,” explains Lewis.

“I could tip the jack down quicker than everybody else. Richard Dutton [Fortec team principal] and Trevor thought I was mad, doing the jack. But we beat them all. It was that little fraction that we needed, and we did it.”

The unlikeliness of the success and measures Lewis’s Comtec team went to don’t end there.

Danielsson had four team-mates across the season, with only one contesting more than two consecutive rounds. The lack of consistency didn’t lend itself to helping the team learn the T05, a challenge made harder when Danielsson collided with Carlin’s Red Bull protege Sebastian Vettel at the top of Eau Rouge at Spa-Francorchamps midway through the season.

“It destroyed the car. We worked through the night and put a new tub on the car, and then going through Blanchimont – leading – the next day, he had a blow-out.

“The car was destroyed, again. We stayed in the awning in the paddock at Spa, bought a complete new car in pieces, built it, didn’t even have time to paint it, so it went to the Nurburgring the following weekend with a carbon black car. And Alx nearly won.

“That was the beginning of the roll. It was what we needed. When I got home I had a parts bill from Dallara for €175,000. I didn’t have the money to pay for it, so I had to do a deal with them to pay them off monthly, to keep going. Alx, everybody pulled together. Alx was very lucky that day, because he could’ve very easily have been killed.”

Formula Scout then asks whether it was true Vettel almost lost a finger in the accident.

“Oh, big time. It was a huge accident,” Lewis confirms.

“Typical Eau Rouge, spinning in tubs, nothing left of the car. Because of the blowout, we actually built three cars in two weeks. That was incredible, and we were very tired and falling out with each other, but we did it.”

After second place against the odds at the Nurburgring, Danielsson won three in a row at Donington Park and the Bugatti Circuit, then added a fourth at Barcelona. Danielsson’s consecutive win tally was a feat only beaten twice in the championship’s 20 year history.

The next year Comtec won just once, with Spanish driver Alejandro Nunez beating Vettel at the Hungaroring. According to Lewis, Nunez’s father “tried to give me the freedom of Spain after that because we’d beat Sebastian Vettel”.

Comtec remained in FR3.5 full-time until 2013, then gradually scaled back over the next three seasons. It only won three more times after 2007, each coming in a plucky underdog performance through Jon Lancaster (2009) and new factory BMW driver Nick Yelloly (twice in 2012).

“I’d had enough of that [high budgets]. I didn’t fall out with Pierre, but I’d had enough. So I decided to stop racing. I got paid out, and had a year at home looking after my daughter [Morgan, now a successful Mini racer] while my wife went to work. I had a fantastic time. But then I got the passion to want to play again?”

Lewis’s 2018 WHT appearance is a story in itself, but he’d already been reliving his youth racing and running Minis, winning a European title in the driver’s seat.

It’s all still based out of a workshop in Snetterton, filling the place with history. With a huge number of drivers having started with or reached the top of their careers with Lewis, who does he think were the best?

“I would say Antonio Pizzonia and Marcos Ambrose. Alx is up there too. They’re all pretty much the same, but my standout driver was probably Pizzonia for his sheer gift. That boy should’ve been a world champion.

“I was so convinced he was going to be a world champion that of all my drivers, I kept his overalls. I thought they’d be worth a lot of money one day. So he owes me a fortune.”

Earning a fortune isn’t what keeps Lewis in motorsport though, and certainly wasn’t what inspired Comtec to its unlikely 2006 title. 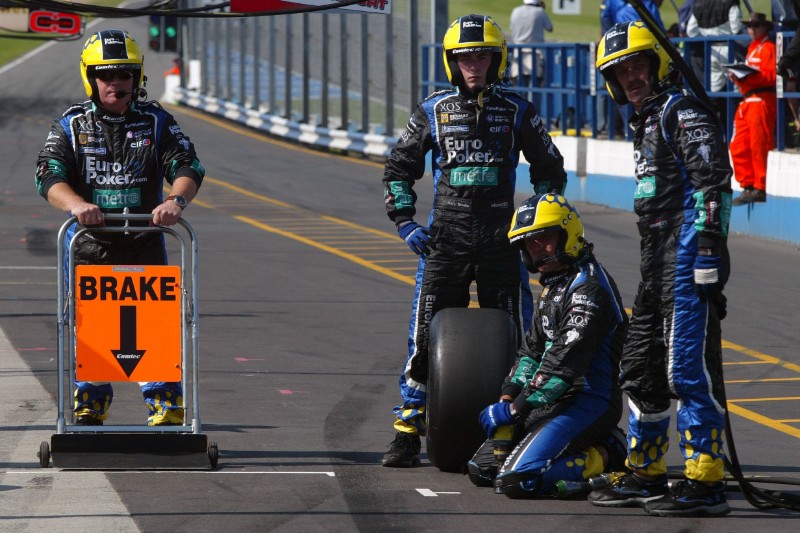