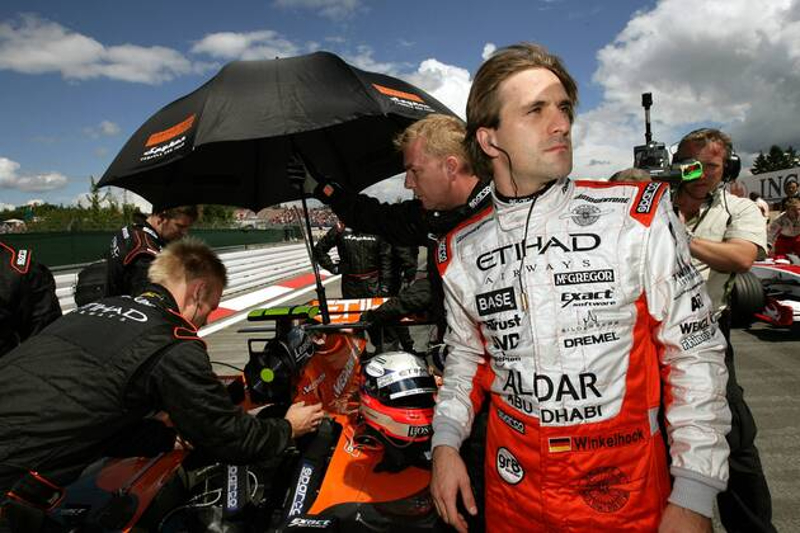 Markus Winkelhock is widely known for leading his only F1 race, but not many know about the build-up to it

Son of late Formula 1 driver Manfred Winkelhock and nephew of 1999 24 Hours of Le Mans winner Joachim Winkelhock, Markus didn’t follow what you would call a normal career path. He never did karting. He never even took part in a race until he was 17, and that was a car race.

“I started racing in 1998 in Formula König. I did no karting before. I just went straight into single-seaters. The first season was just for fun, and I finished second in the championship,” Winkelhock told Formula Scout.

The good results achieved as a rookie made him consider pursuing a racing career. So he spent two years competing in different Formula Renault 2.0 series, winning races in the German championship as well as in the Eurocup.

“I had not so much experience, especially fighting, because I had never raced against other people on a race track. I had to learn quite a lot, but I think I got it quite fast and after one or two years there weren’t any problems for me anymore.”

His efforts wouldn’t go unnoticed and a very good first season in German Formula 3 in 2001, with three wins and five more podiums, earned him a chance as Mercedes-Benz junior driver.

“I got an offer from Mercedes. It was like a junior contract from F3 and up to DTM. I signed it, and I did two years of F3, and then I did DTM for Mercedes-Benz,” Winkelhock said. However, he stressed that for him “the target was always F1”.

Winkelhock’s next two years in F3 were with the heavily Mercedes-linked Mucke Motorsport team. A middling sophomore German F3 campaign was followed by fourth in the Euro Series in 2003, ahead of the likes of Nico Rosberg and Timo Glock.

As planned, he moved to DTM the next year, but things didn’t quite work out. Having not scored a single point through the season and with a best finish of 13th, Winkelhock left the Mercedes stable to chase his F1 dream and it could be said it paid off. 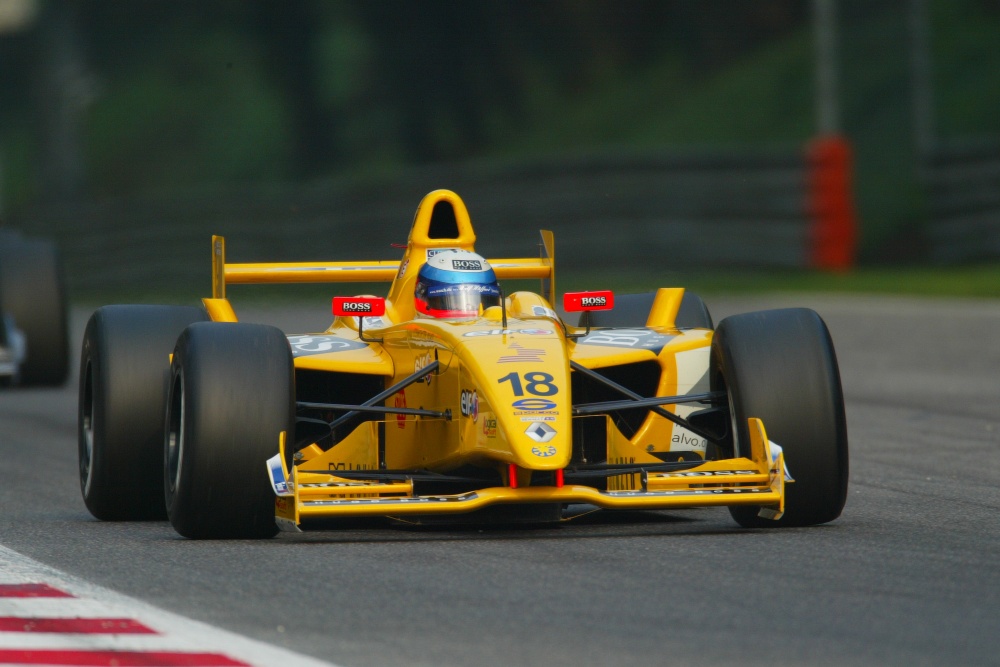 He teamed up with Draco Racing for the 2005 Formula Renault 3.5 season, in what was a successful comeback to single-seaters. Despite a slow start to the year, Winkelhock finished the season in very strong form, coming third in the standings with three wins and finishing just two points behind title runner-up Adrian Valles.

“I was fighting for the championship the whole year, and Robert Kubica won it at the end. I remember I had technical problems with the gearbox at one point, and I lost many points there. However, I had quite a good year. It was a great and cool time in FRenault [3.5],” Winkelhock explained when he was asked about his memories from that season.

At the end of the year he would test a F1 car for the first time in his career. “It was at the end of 2005, in December, in Jerez. I was a little bit nervous I have to say because it was my first time driving a F1 car. It was a really good experience, I could drive for the whole day, get some big mileage, many kilometres. It was a very nice day that for sure I will never forget.

“The year after I had the chance of becoming Friday test driver for Midland in F1. Unfortunately, there was no racing, but it was already a first step for me in F1.”

Becoming test driver brought Winkelhock a step closer to fulfil his dream. As part of his test and reserve driver role, he took part in four free practice sessions as well as in some private tests during the 2006 season. And then finally, the chance of competing in a F1 grand prix arose in 2007 as the team was bought by and rebranded as Spyker.

“Christijan Albers ran out of money during the season, and as I was the spare driver, they decided to put me in the car for that race at Nurburgring, which was perfect timing because I’m German in a German race, it was perfect for me.

“I was absolutely happy when he called me one week before and he told me that I could probably drive next week’s Nurburgring race. For sure I was super excited at this moment.” 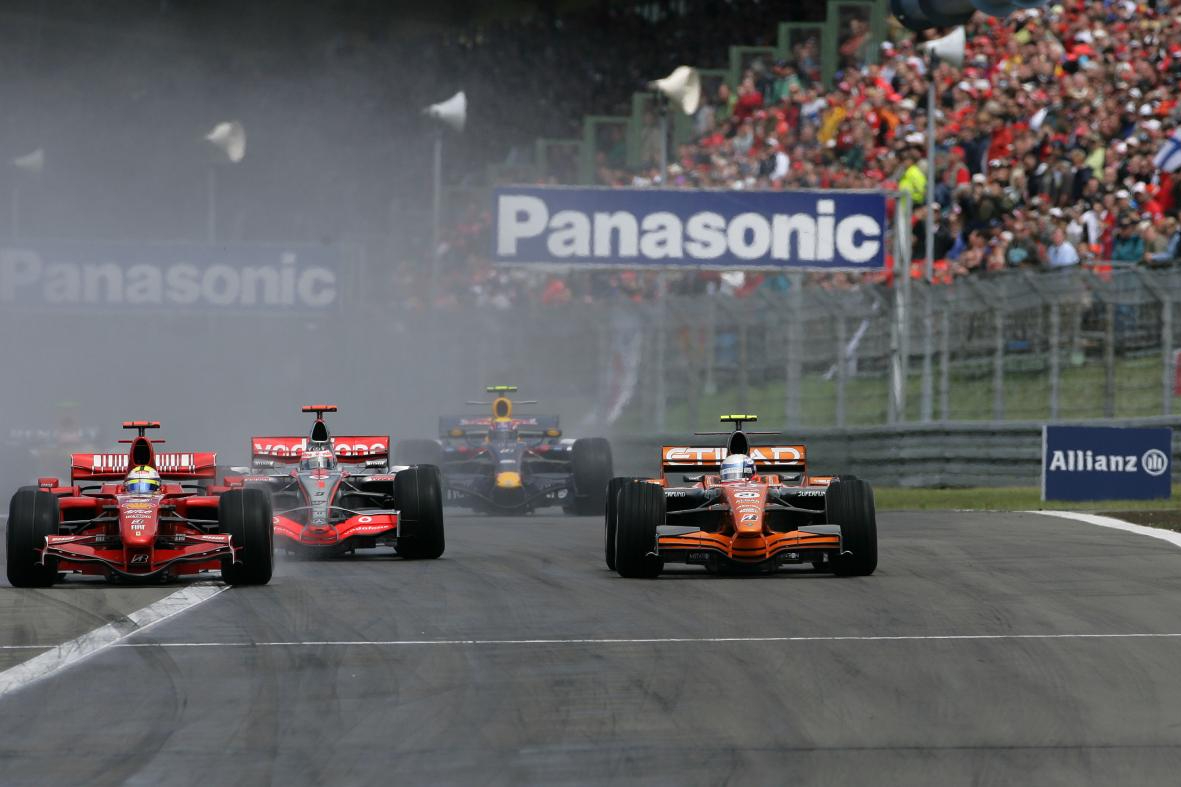 The 2007 European Grand Prix was the last edition of that race to take place in German soil, as in 2008 it moved to Valencia. Heavy rain falling in the opening laps gave Winkelhock the opportunity to shine in his sole F1 start, and so he did.

“My target was just to do the best job possible, and that was it. But then at the start, when it started to drizzle in the formation lap, I was the only one coming directly into the pitlane. I put rain tyres on, and I was starting from the pitlane.

“In the formation lap I said [over the radio] that I had some rain drops on the visor. Then I didn’t hear anything for 10-15 seconds, and then I said I think there is maybe rain coming. And 20 metres before the pit entry they said ‘box box box’, and I entered.

“Everybody was starting on slicks, and then after 20 seconds it started to rain and the rain tyres gave me a big advantage. I could overtake everybody quite easily, and then they all had to come in to put rain tyres. Then I was leading by I think 50s, so it was quite an amazing feeling. Unfortunately, they put a red flag, so all the gap was gone. I lost the 50s gap I had, but leading at my first race was definitely such a cool feeling,” he recalled with a big smile in his face.

“The car was so slow compared to the McLaren and all the other fast cars that even if I had kept that 50s gap, we were like three or four seconds per lap slower. So, after 15 laps they would have caught me anyway, even without the red flag.

“I didn’t care so much about this technical problem because the story which happened before was so cool and so funny, so I didn’t care about the problem in the car.”

Winkelhock’s race came to an early end on lap 13, as a hydraulic issue forced him to retire the car. Nevertheless, what happened before prevails for him as no one else has ever done something similar. Unfortunately, the lack of budget would make that one the only F1 start of his career. However, it’s what happened at the Nurburgring on that day, 15 years ago on July 22 2007, that will live in his mind forever.