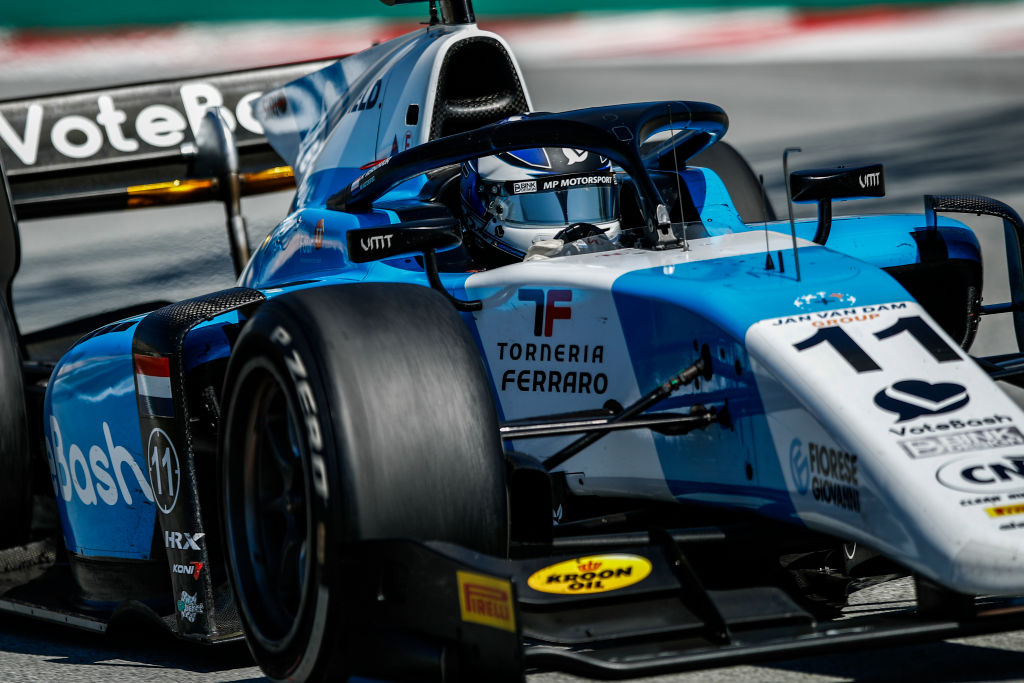 There are two types of number that matter in motorsport: the ones on timing screens and the ones on the invoice sheets. Richard Verschoor may be lacking in the latter, but his pace means he must stay in F2

In 2018, Alex Albon famously started the Formula 2 season on a round-by-round deal with DAMS. He made a statement by qualifying third for the season-opening race at Bahrain and finished fourth, then came 13th in the sprint race after he encountered straightline speed issues with the then-new Dallara F2 2018 car. Next time out he won from pole in Baku.

A similar situation is playing out in 2021 with a rookie rather than a F2 sophomore and at a team that is arguably less competitive. Richard Verschoor is still searching for sponsors to maintain a seat at MP Motorsport for round two of the season after making his debut in March and starring by qualifying sixth and finishing fourth in the feature race.

And unlike Albon, he was able to leave Bahrain with a decent haul of sprint race points too. But still no confirmed deal for round two.

A more in-depth look at Verschoor’s weekend and it was even more impressive, having been fifth fastest on long-run pace on Pirelli’s soft compound tyre during the races and the second strongest start to a season for an MP driver in GP2/F2 history.

Following the Bahrain round was a three-day test at Barcelona, where Verschoor once again starred. Testing can’t be read into too much, and the condition of the Catalan track generally got worse over the duration of last month’s running, but usually tests at Barcelona have been far more indicative of the competitive order than those on Bahrain’s highly abrasive asphalt, Jerez’s tight layout or post-season favourite Abu Dhabi (used after rubber’s been laid down by a Formula 1 weekend).

And that should be a sign of confidence for Verschoor, who was third fastest on raw pace at Barcelona and second on long-run pace. MP was the only team to use the track for race simulations when it was in its best condition on day one, but excluding those runs Verschoor is still third fastest behind Hitech GP’s Juri Vips and Charouz Racing System’s David Beckmann.

Long-run pace is actually a big weakness of Charouz, and Beckmann was one of only two drivers to complete back-to-back-to-back runs to assess race pace as he repeated his pre-season testing strategy of trying to rack up as much mileage on clear track as possible to get more data on the changes in car behaviour as it goes from high to low fuel on new and used tyres.

Verschoor went on four long runs across the whole test, with only team-mate Lirim Zendeli and HWA Racelab’s drivers doing less – and for Zendeli and HWA’s Alessio Deledda that was down to session-stopping offs. Of the laps racked up in long runs, only those three recorded less than Verschoor too. Virtuosi Racing’s points leader Guanyu Zhou did more than twice his 58.

During the test, Verschoor said he was “pretty confident” of making it to the next round in Monaco, and in the weeks since he’s been working and searching for sponsors across Europe. In one way it’s hurt Verschoor that he doesn’t get to race at Barcelona, a track he’s competed at in Spanish Formula 4, Formula Renault Eurocup and FIA Formula 3, but the longer break before the next event has given him more crucial time to find the budget needed and reduces the disadvantage of inexperience given only Campos Racing’s Ralph Boschung, DAMS’ Roy Nissany and Zhou have been to Monaco before in F2.

“Of course, we don’t race in Barcelona, but it is always good to try some stuff,” Verschoor said while at the Spanish test. “I think our pace in general is quite good. I just need to finalise some of the smaller stuff in terms of my driving style.”

His driving style should suit the streets of Monaco if his 2019 Macau Grand Prix win is anything to go by, although he went into that event a little fazed by the circuit’s challenge and his Monaco record in FR2.0 wasn’t brilliant. The round after that is Baku, a track similar to Sochi (also on the calendar) where Verschoor excelled in F4 and GP3 with MP.

“Working with the team has gone pretty well [in F2],” he said. “They have given me a lot of confidence, which is what I need.

“I basically know all of the guys here because I have been in MP now for a while, so the communication is really good. I think that we’ve got a really good environment here. I love working with my engineers and the mechanics, so I am really pleased at the moment.”

Pirelli’s supersoft tyre will be used for the upcoming street circuit rounds, but as that tyre has only ever been used for one stint of one race since its introduction and it wasn’t made available in testing (nor was the updated medium compound) it means it’s anyone’s guess who will get the best out of it now. The emphasis on reversed grid races now means a mid-pack Verschoor may be will placed to earn a podium or two if he goes to Monaco.

The pre-season test and races at Bahrain, as well as the Barcelona test, is going to be a more useful indicator of who will be fast at Silverstone and to some extent Monza with the circuit type and expected tyre compounds made available, and all factors point towards Verschoor having the machinery and the ability to be a points-scorer at both circuits.

Felipe Drugovich claimed MP’s first pole in eight seasons of GP2/F2 at Silverstone last year, and Monza was the scene of Verschoor’s highest-scoring weekend from his two FIA F3 Championship seasons. And there is kind of the elephant in the room in the 20-year-old’s career.

Verschoor was unexpectedly snapped up by Red Bull after the winning start to his single-seater career in Sochi, but was dropped after making the step up to FR2.0 and taking a single win at Assen in his first full season in the category. He hasn’t won a regular-season race since that eight-car FR Northern European Cup contest in August 2017.

Either side of his rookie FR2.0 year he starred in the Toyota Racing Series and narrowly lost out on the title twice, and won Macau too, but in the three years after being dropped by Red Bull there was just three podiums in his primary programmes.

F2 seems like the place where Verschoor could rebound even better if he can just secure the funds to see out the season.