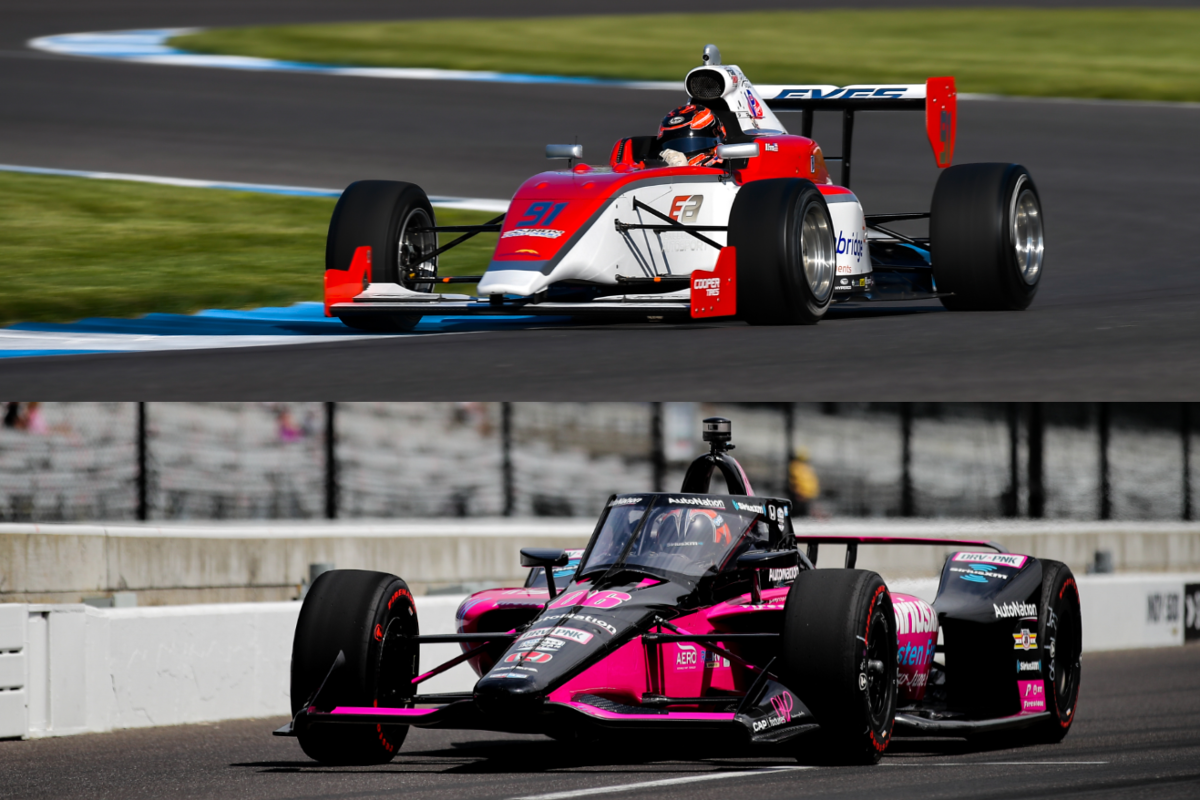 Meyer Shank Racing won the 2021 Indianapolis 500 at the weekend with Helio Castroneves, and its second car could in the coming years be occupied by a driver currently in Indy Pro 2000: Braden Eves

Were it not for an injury that shortened his rookie Indy Pro 2000 campaign, it’s conceivable that 22-year-old Braden Eves would be in Indy Lights this year and with his eyes on a few races in 2022 driving Meyer Shank Racing’s second IndyCar entry.

Instead he’s still in IP2000, and thankfully has made it past the Indianapolis Motor Speedway round that almost curtailed his racing career last year. In the eight races he started in 2020, Eves claimed a win and two poles and had a scoring record that would have put him in the battle for the top five in the standings. He had been third in the points preceding the first race of the Indianapolis weekend where a crash on the banking left his car upside down and gave him a broken neck.

Eves had stepped up to IP2000 as the reigning USF2000 champion, after a 2019 season that began with four straight wins before the momentum swung the way of Hunter McElrea and he had to take back the points lead in the season finale.

That USF2000 season was sponsored by Meyer Shank Racing (MSR), whose founder Michael Shank graduated from the same high school as Eves, and the team has continued to back Eves ever since.

Meyer Shank was created in 1989, and ran Shank to the secondary class title in Atlantics in 1996 and Kenny Wilden to the overall title runner-up spot in 1999. In between, Shank made his own IndyCar debut at Las Vegas in 1997 and finished 16th.

His team remained in America’s second tier of single-seater racing until the end of 2002, and then switched to prototype sportscars. It claimed six wins in Grand-Am and IMSA, including the Daytona 24 Hours and Petit Le Mans, before downscaling that programme to GT cars in 2017 to anticipate a single-seater return in IndyCar. 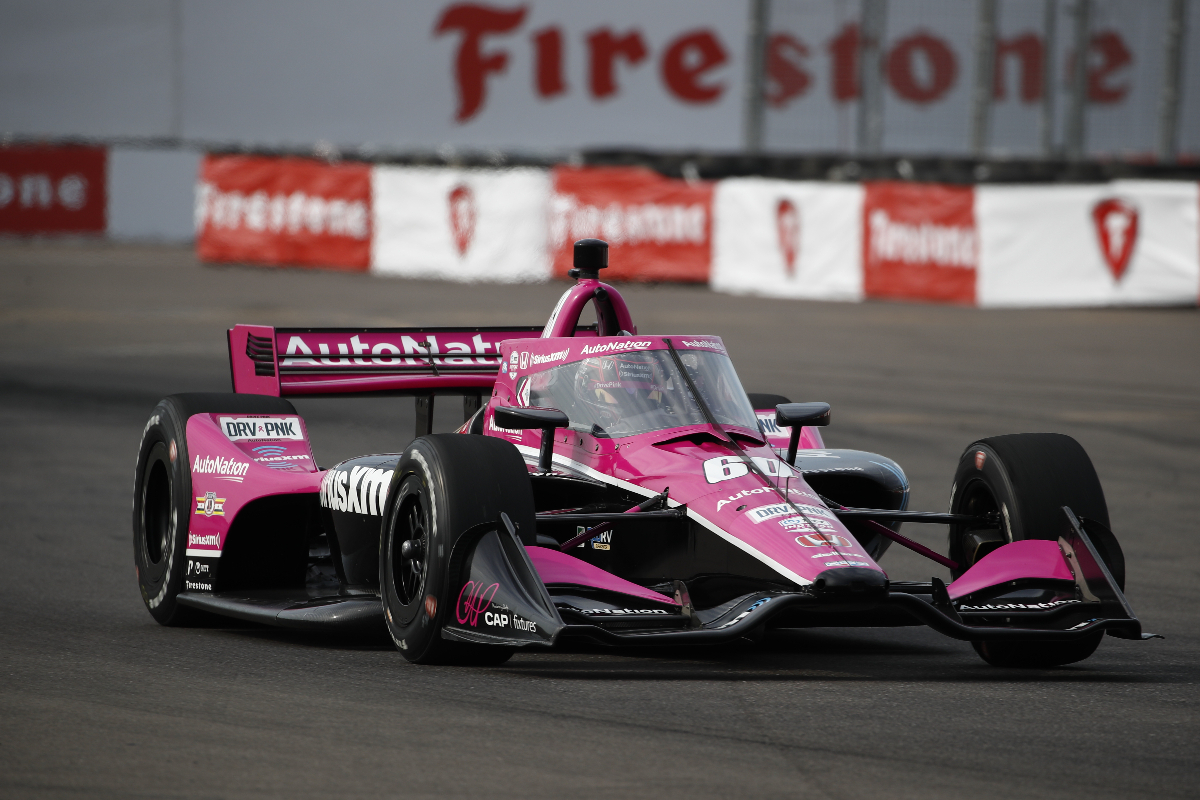 Jack Harvey in the 2021 GP of St. Petersburg

MSR had originally planned to enter IndyCar in 2012, but the plan fell through and so it had to wait five more years before two-time Indy Lights runner-up Jack Harvey took the start of the Indianapolis 500 in a car supported by Andretti Autosport.

Schmidt Peterson Motorsports collaborated with MSR for the next two years as it embarked on part-time ventures with Harvey, and the Briton made the podium at the 2019 Indianapolis Grand Prix. The ambitions increased for 2020, embarking on a full season (with Andretti technical support) and its performances were noticed as Liberty Media – Formula 1’s owner – bought into the team via its Formula One Group.

But the frontrunning pace MSR has shown since then didn’t translate into strong race results until last Sunday’s Indy 500, as shown by three of the last six race reports on MSR’s website being headlined “Heartbreak for Harvey…”.

A front-row start in St. Petersburg was converted into a fourth place, a result he was denied in the second Texas race when a rear-right wheel bearing went up in smoke. Second place at the Indianapolis GP was then on before a pitstop issue and deflating tyre put him a lap down. An engine problem put him out of Indy 500 free practice one too, and 18th place in the race means he’s 13th in the points – one place ahead of team-mate Helio Castroneves who has done only that race and won it.

Castroneves has five more races to do in 2021, and is now hungry for more IndyCar action in 2022, while Harvey is on the right track to earn his contract for the next season if he can bring the budget required too. The Indy 500 victory has only bolstered MSR’s intentions to run two cars full-time in the future, and it wants Harvey to be in that prospective line-up.

If just that occurs, then Harvey will be an experienced IndyCar head by 2023 and therefore the team can look at bringing in youth alongside him rather than a series veteran. And it’s already got its eyes on Eves to fill that role.

In addition to MSR’s sponsorship of his IP2000 programme with Exclusive Autosport, Shank himself has acted as a mentor and “given me advice with lots, on getting sponsors and what I need to do to make the next step”, according to Eves. 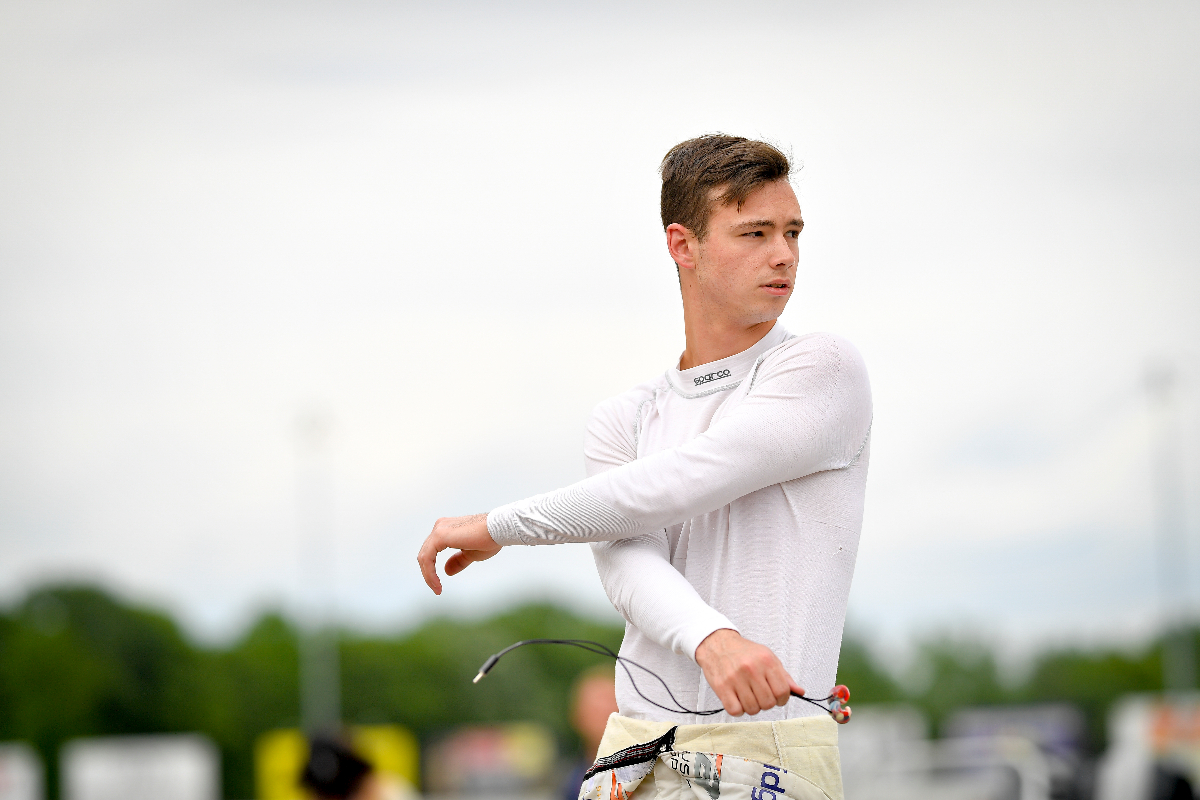 Almost halfway into the season, Eves is 13 points off the IP2000 points lead with two wins and two poles to his name. Remarkably, the first of each of those came in his comeback race from injury, and he’s finished no lower than sixth so far – a feat only nine drivers have managed for a whole season in the national championship this century. But can consistency take a driver to a title in a series where only two of the last 11 champions have taken less than six wins in their title-winning season?

“I think we’ve been consistently the quickest and the guys to beat,” Eves says to Formula Scout.

“I’ve had a lot of bad luck, qualifying two at both Barber Motorsports Park and St. Petersburg; with a red flag coming out 15 seconds before I finished a lap that would have been pole in Barber, and St. Pete only getting four minutes of qualifying due to a transponder issue.”

In the uncompromised first qualifying sessions at each of those rounds, Eves took pole and converted those into wins.

“That, on top of the caution that left me a sitting duck in race one at Indy the other week… we should have had three wins.”

Extra emphasis was put on the Indianapolis road course round earlier this month as it included three races. While Eves was the only one to make the podium in all three races, he was outscored by chief title rival Christian Ramussen by a single point.

Eves led most of the opening race but was passed by Jay Howard Driver Development’s Rasmussen on a late restart and beaten to victory by a tiny 0.0713 seconds. It could prove to be a critical result in the championship battle.

While IndyCar then raced on Indianapolis’s famed oval, the support series headed to the shorter Lucas Oil Raceway for their oval action last weekend. The singular race contributed 1.5 times the points for victory as a road course race would, also making it an important title battleground and one where – for the first time – Eves wasn’t a victory contender. 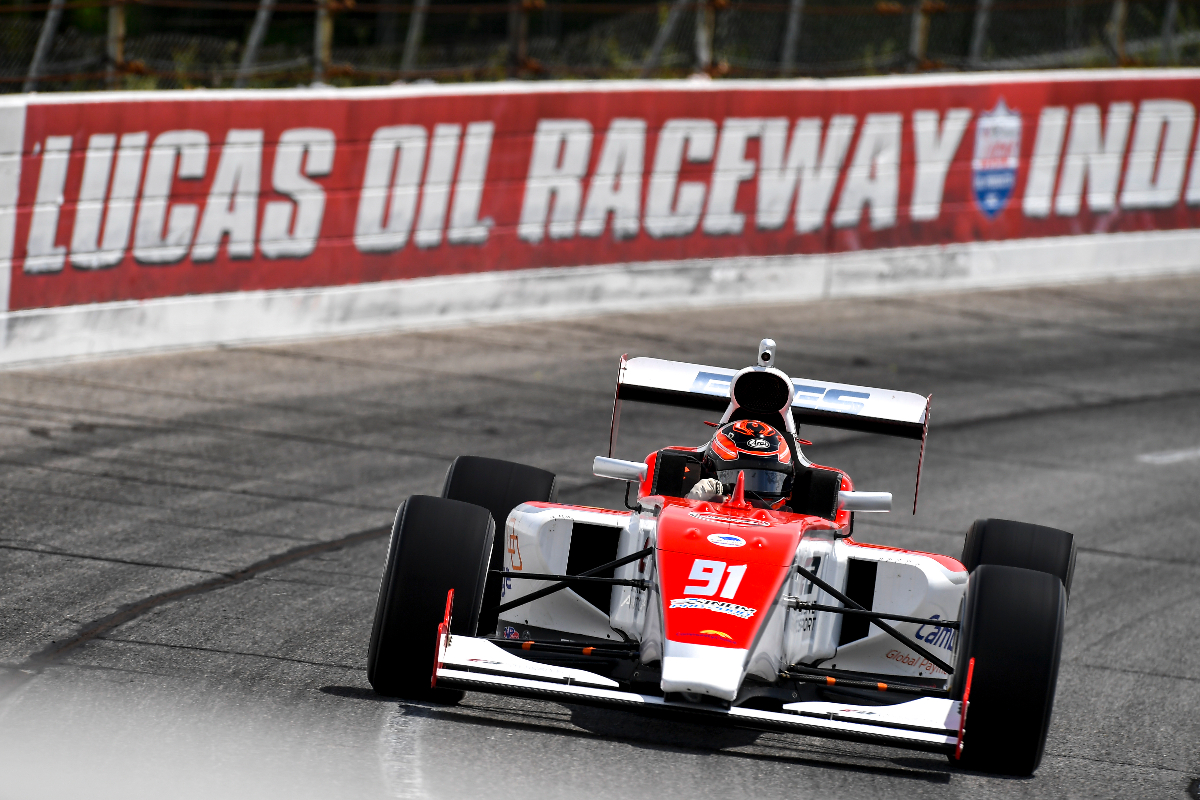 “This was the first weekend that we didn’t quite have the package to win,” he admitted.

“The rest of the season I’m expecting the bad luck to halt and I think if we keep doing what we’re doing the wins and points will come.

“Mid-Ohio I was on target to sweep last year until I got taken out of race two. The team I have behind me is extremely strong, so we don’t need to change anything, just deliver as we have and avoid being vulnerable to things like the qualifying issues and we have a good shot at the title.”

If Eves turns the remaining 10 races of the year to his advantage to triumph over Rasmussen, and the chasing Reece Gold (Juncos Racing) and Artem Petrov (Exclusive), then he can guarantee himself the step up to Indy Lights for 2022.

Bad results will be less costly now for Eves, but also for his rivals, as the grid has shrunk to 11 cars after RP Motorsport’s drivers Enaam Ahmed and Enzo Fittipaldi pulled out due to a lack of budget and other racing taking priority respectively.

That means 10 points will be earned for just starting a race, and will make it harder for a driver to streak away in the points unless they go on a winning spree. MSR will be hoping that Eves does just that, especially with two upcoming rounds at his local Mid-Ohio track, as it continually evaluates his future IndyCar potential.

And in some capacity the team has already seen him perform driving an IndyCar. Eves was initially selected as the Road to Indy representative in this year’s IndyCar iRacing Challenge – the accompanying Esports series to the real-world action that was launched during the first lockdown period of the COVID-19 pandemic – and he finished second on his Montreal debut. 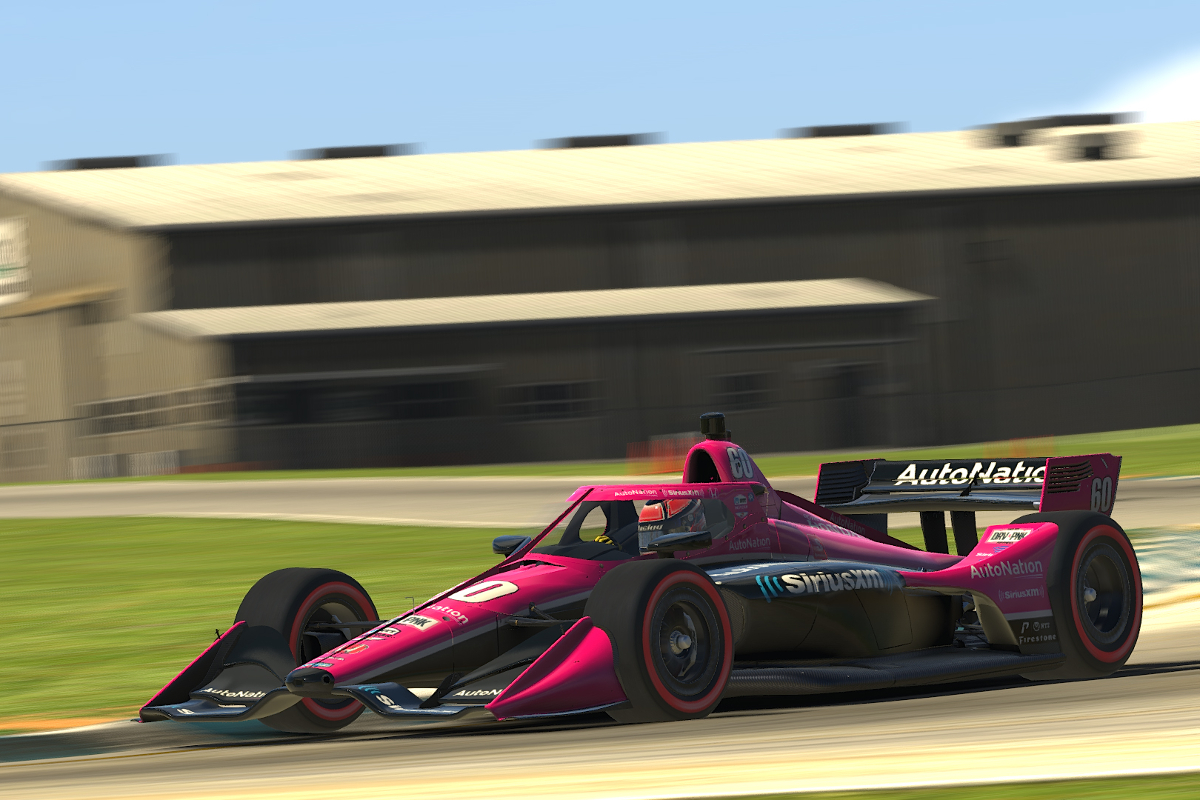 He followed that up with fifth on Homestead-Miami Speedway’s oval, then MSR called him up for the Sebring finale. Eves impressed again by qualifying second and finishing fourth. Had points been awarded he would have been title runner-up behind current IndyCar championship leader Alex Palou, and he was third in the Road to Indy’s own Esports series.

These performances should not be ignored, as the 2020-spec IndyCar model on iRacing is generally considered very similar to the real-world car and both drivers and teams have treated the companion Esports series very seriously.

And if the likely step up to Indy Lights occurs in 2022 and Eves is a title contender, then he’ll probably be doing his first test in an IndyCar at the end of next year.

More on American racing
Why Indy Lights’ return stood out for more than just hype of anticipation
The drivers to watch on the Road to Indy in 2021
The Road to Indy’s Esports star aiming to replicate Newgarden’s UK breakthrough
Scout Report: Hunter Yeany
Read our coverage of: Road to Indy   Formula Regional Americas   United States Formula 4