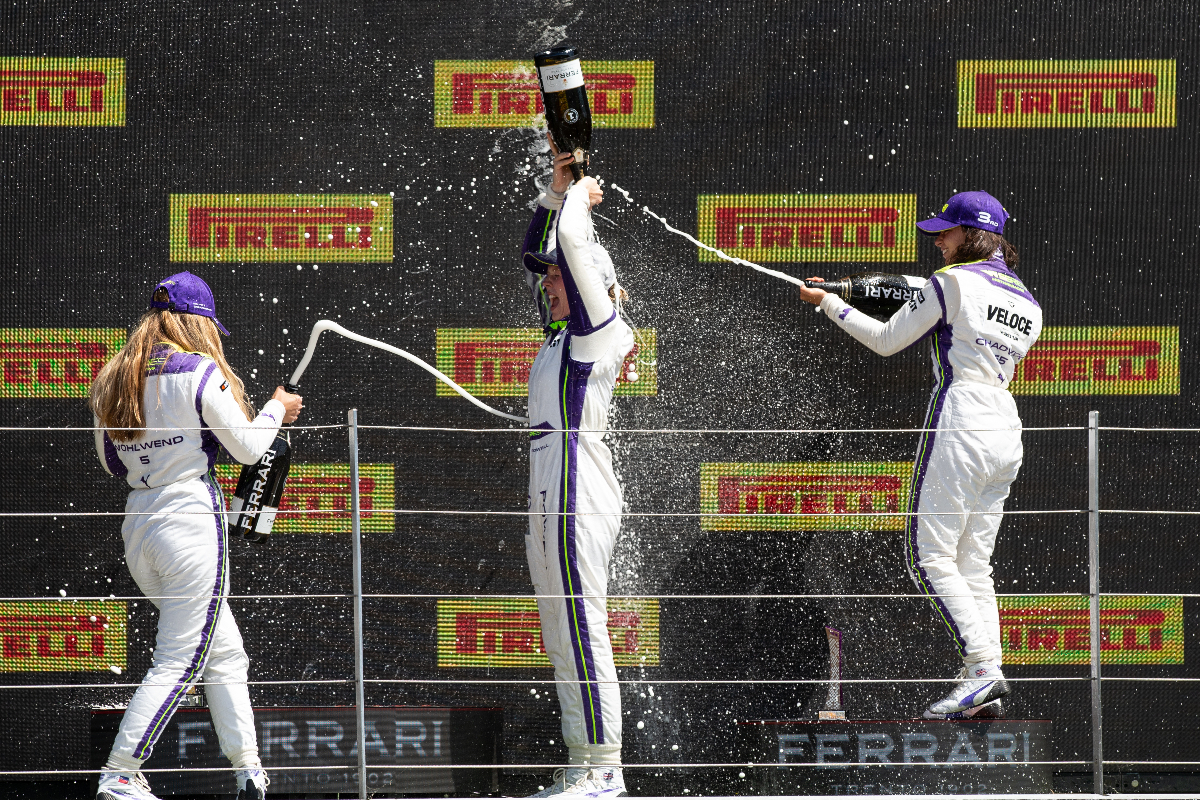 Lewis Hamilton’s 99th F1 win was not without controversy at Silverstone, but there was no questioning Alice Powell’s popular home win the day before at the British GP to get a grip on W Series’ second season

“A dream weekend. It nearly wasn’t, Fabienne nearly ruined that dream weekend, but we managed to save it in the end and to win in front of the home crowd was really special.”

Alice Powell’s immediate reaction in the press conference to taking her second home W Series victory summed up a great battle between herself and Fabienne Wohlwend that really started the day before in qualifying.

With the way the schedule was set, the fans turned out in numbers for arguably W Series’ most important weekend of the season on Friday and Saturday for the British Racing and Sports Car Club-administered series at Silverstone.

W Series’ fan zone properly returned for this event, and three of the six British drivers sat at the top of the standings. It was going to be interesting to see whether that form would carry on.

Qualifying was largely between Powell and Wohlwend, with the former holding an advantage that seemed unbeatable until Wohlwend’s late effort. That was before Powell bounced back and took her second pole.

But in the race, itself, Wohlwend got the jump and edged out into the lead.

“I’m so proud of my start, it was I think the best start in the season,” Wohlwend said in the post-race press conference. “I could make a move, take the lead, and I had a safe gap to Alice until the safety car came out,”

For Powell, meanwhile, clutch issues that were identified on the way to the grid played a part in Wohlwend drawing level. 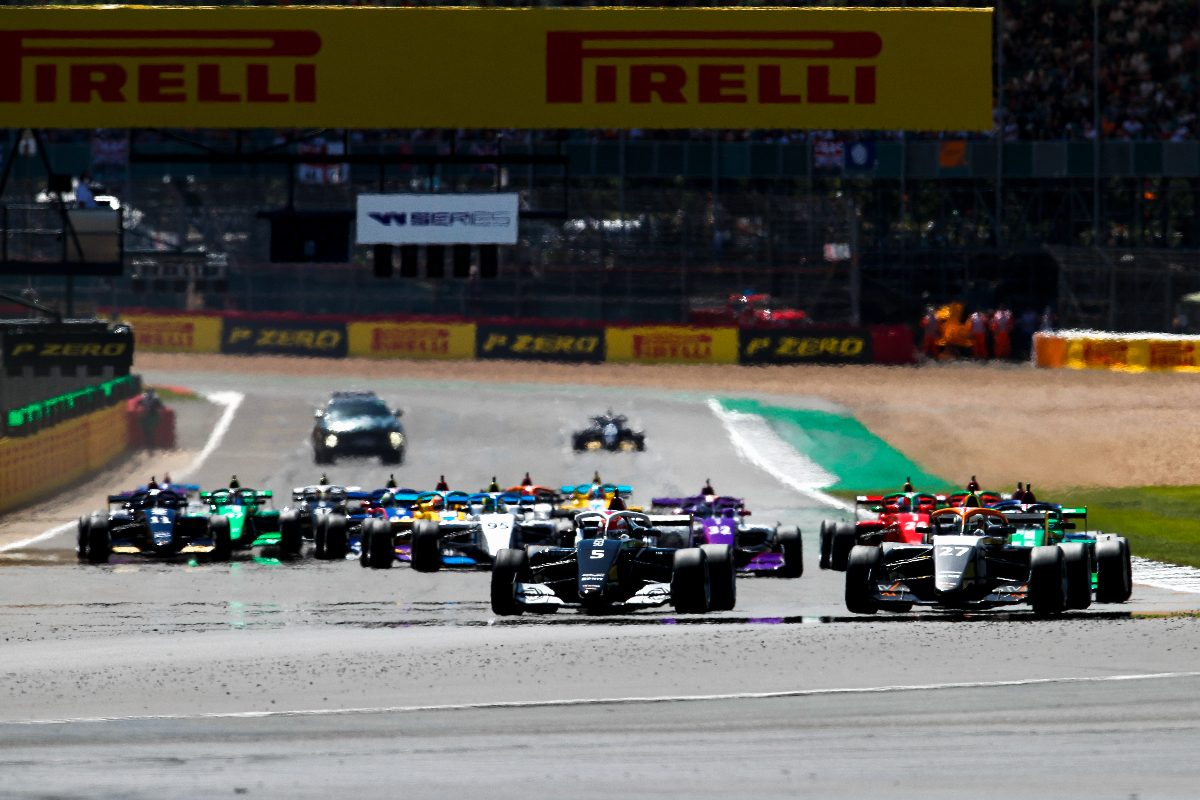 “I didn’t get a great launch off the line,” she said. “Initial getaway was a bit dodgy, I just released the clutch a bit too quick. It felt a bit different on the way to the grid, I said to the guys over the radio that the clutch feels quite a bit different.

“So I should have maybe adapted myself a bit quicker, but Fabi got an excellent start, we had a good battle for the first four corners and then it was just trying to force her into a mistake or get as close as possible – it’s so hard to follow around here in the dirty air.”

The arrival of the safety car after a technical issue for Miki Koyama gave Powell the opportunity she needed to pounce, and she capitalised on a mistake from Wohlwend shortly after racing resumed.

“The safety car came out, and I thought ‘right, this is going to be really the chance to capitalise and try and get past’ and she made a small error going into turn 16 and I managed to capitalise on it and from then on we had good pace and it was just about bringing it home.”

The win clearly meant a lot to Powell. She had won the 2019 seaso finale at Brands Hatch in front of packed grandstands full of home fans, and won at the Red Bull Ring earlier this month, but this was on a different scale. This victory had a British Grand Prix crowd, was at a track she had won on in Formula Renault 2.0 and Formula 3 before, and executed brilliantly.

“Once I got into the lead, I made a small mistake at Luffield, dipped a wheel into the gravel pushing a little bit too hard but the car still felt really good and I was able to build a gap and the race actually went pretty quickly for me,” said Powell.

“I could have easily carried on driving around for another 30 minutes, because I was quite happy enjoying myself. When it did finish, I actually said I was really close to crying across the line but I thought ‘nah, I’m not going to do that’. But I screamed a lot, my voice is going to hurt tomorrow, that’s for sure.” 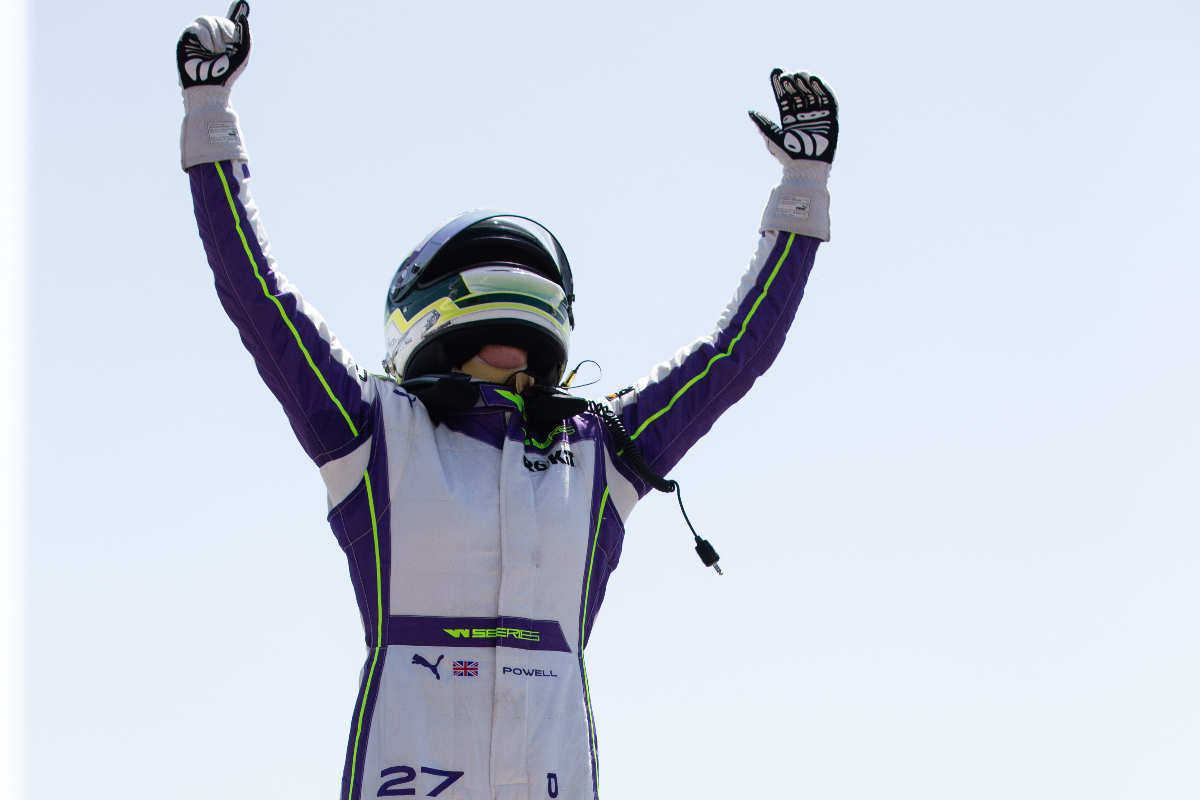 Formula Scout asked Powell where the win ranks in her career, which includes two FR2.0 titles and a season in GP3.

“It’s extra special, and the roar of the crowd when I got out of that car was incredible. So to see the amount of support and the flags all waving on the in-lap was super special.

“It’s definitely up there. There’s so many highs and so many lows, the highs definitely make up for when you have the lows, so this is going to be right up there.”

She also put it into perspective of her trips to the British GP as a young fan, and now standing on the podium’s top step.

“I probably attended my first British Grand Prix when I was about six or seven years old, and I have so many great memories of sitting on what is the old pit straight now.”

One of those memories included ignoring her mother’s wishes for her to wear ear defenders.

“I just remember pulling them off ever so slightly as the cars went past and I immediately put them back on again.

“To experience from the other side, to race at a grand prix, it’s not my first British GP but to win and stand on the podium in front of a home crowd who have just been incredible today, is amazing.

“It’s something that’s going to live with me for a very, very long time and I’ll never forget today, that’s for sure.”

Wohlwend, meanwhile, felt the win was on for her without the safety car. Formula Scout asked her about missing out on a maiden win. 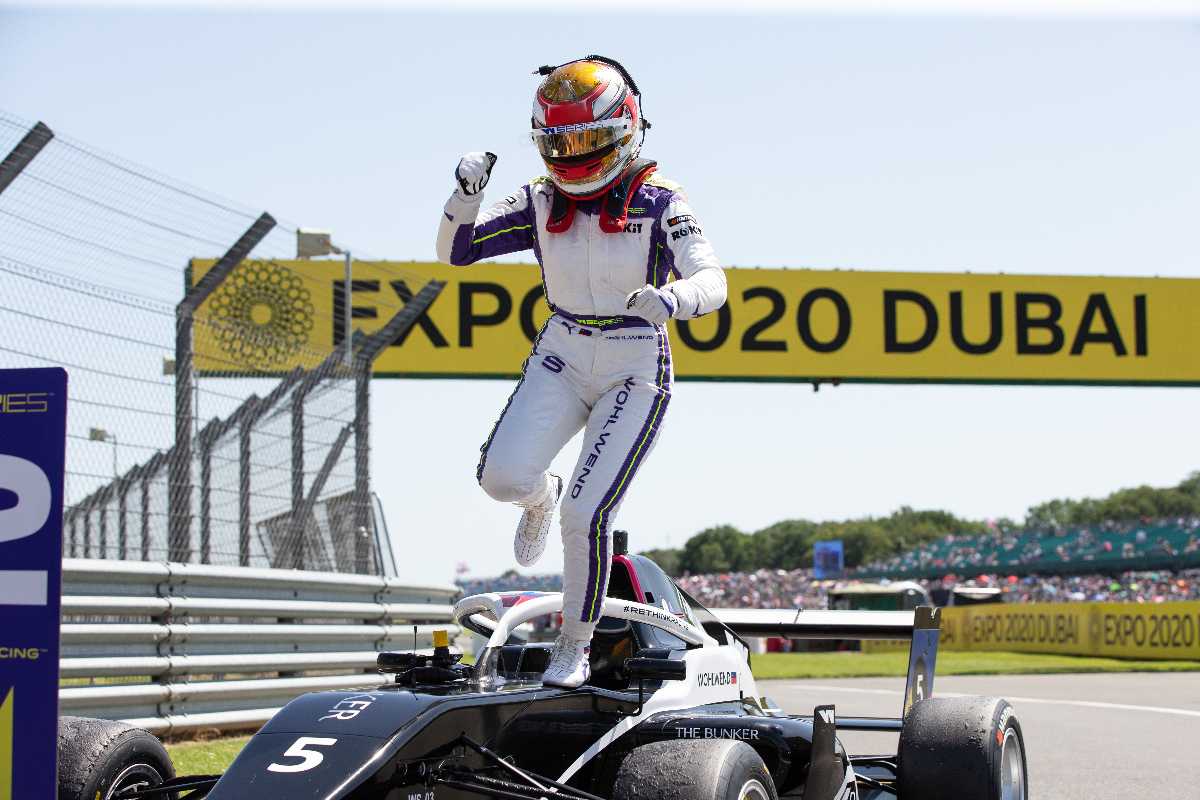 “I must say it hurts a bit,” she said of finishing second. “Of course I’m mega proud of the position, but I think I had a pretty safe gap [before] the safety car. It messed it up a bit, my tyres were cool again and I was struggling with the balance of the car. We never know what would have happened without the safety car, but we take P2 and move on.”

W Series’ main aim is to get a woman into an F1 seat, but it also provides drivers who may have disappeared off the radar to return to it. Powell and Ferrari Challenge star Wohlwend are two great examples of this, and demonstrating her abilities on such a large stage as last weekend is helping build her case to have a racing career at a higher level.

And three days after her Silverstone win, the Virgin Racing Formula E team based just outside of the circuit gates announced it had signed Powell as its development and simulator driver. That follows Jamie Chadwick being signed as a Williams Formula 1 junior, and Beitske Visser landing a World Endurance Championship seat in an LMP2 prototype sportscar.

The W Seires grid is stronger across the board this year, and Powell is looking the strongest of the bunch right now, but there are some chargers – both young and experienced ones – who aim to change that in the coming races.

While Belen Garcia showed great pace in the opening round of the season, and Irina Sidorkova took a brilliant podium in the second race in Austria, the pressure on Powell’s own protege Abbi Pulling coming into Silverstone must have been huge as it was her W Series debut.

The British F4 regular impressively qualified and finished eighth, given her previous experience of the Tatuus T-318 car came to a Formula Renault Eurocup round and one W Series test.

“She was waiting when I got back, she was sat on a quad waiting for me,” Powell said after the race.

“So I asked how she did when we finished the podium, I heard that she had a great little race. We did a lot of our prep, if not most of our prep together, so what I did, she did, and super proud of her to finish in the top eight and to be battling. 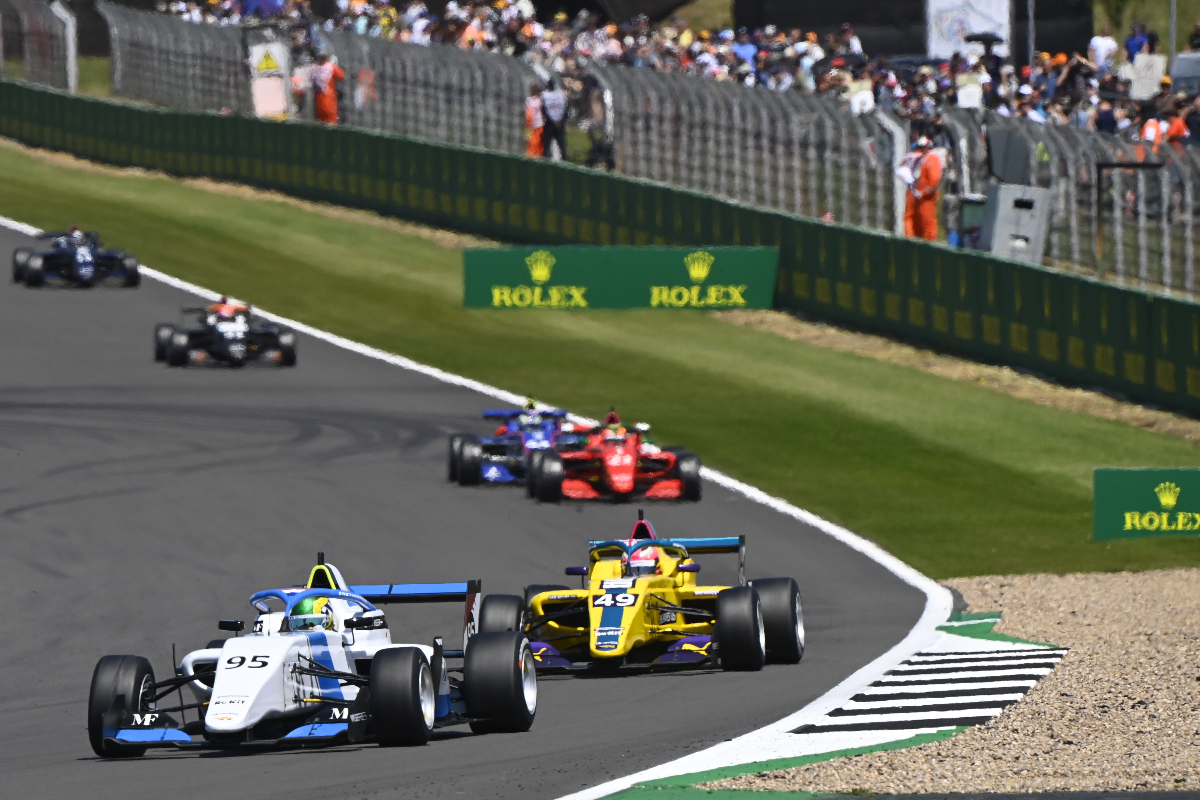 “She’s a huge talent for the future and one to watch in W Series, which is her aim to compete in when she’s available, hopefully next year onwards, as her step forward up the ladder to F1.”

And because of Powell’s own racing ambitions, Pulling actually had less support than usual.

“To combine the two I’ve had to sort of had to say ‘hang on Abbi I need to do my own stuff before I give you a little bit of advice’. So managed to separate the two quite nicely this weekend, but I’ve always been keeping an eye on how she’s been getting on and I’m super proud of her.”

Powell added she “probably would have cried” had Pulling made it onto the podium with her. There was a second Brit on the podium in Chadwick, who has now conceded the championship lead to Powell by six points.

“I think I didn’t quite have the pace of the top two drivers today, Fabs and Alice did a great job,” Chadwick said.

“From my side, just tried to have a clean race myself, no mistakes, and third place at the British GP, I’ve got to be reasonably happy but also it would have been great to have fought at least for the win today. So a bit disappointed, but at the same time happy with the points and I think out of what could have been this weekend I’m pretty happy with the result in the end.

Formula Scout asked where the deficit in the race came from.

“Numerous factors, I think,” she replied. “I definitely didn’t do the best job, or as good of a job as I could have done this weekend. But I think it’s just the nature of the championship this year. It’s not going to be easy to have the advantage I had at Red Bull Ring race two or Alice had at race one.