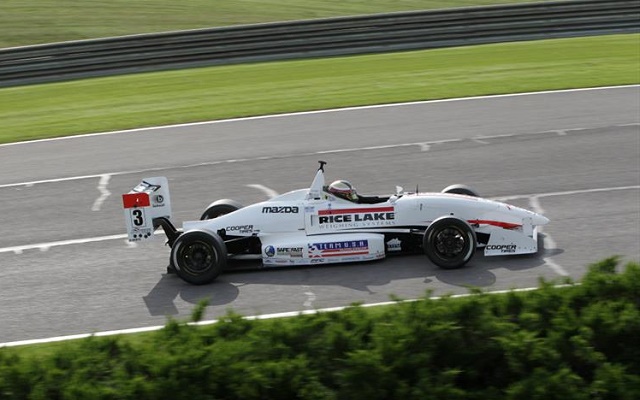 Aaron Telitz became the fourth driver to claim a victory in the 2015 season of the?USF2000 National Championship in race one at Barber Motorsports Park.

Telitz produced a superb performance in the closing laps of the race, passing championship leader?Jake Eidson?and front row starter Victor Franzoni?in a span of just two laps to emerge as the winner.

The complexion of the entire race changed from lap one, when Franzoni tangled with polesitter?Nico Jamin at turn two, putting Jamin into the adjacent gravel trap and thus ending the Frenchman’s chances of winning. The Cape Motorsports driver would finish 14th, one lap down, but salvaged the fastest lap of the race from a difficult evening. Meanwhile, Franzoni carried on, running ahead of Eidson and Telitz for most of the 20-lap race.

But on lap 18, Telitz got around Eidson at turn five to put him within striking distance of the Brazilian race leader. The next lap, Telitz pounced after Franzoni got a bad run out of turn three, and tried a move on the outside, making it stick and never relinquishing the lead in the final lap and a half.

This is Telitz’s second career USF2000 victory, his first coming on the short oval at Lucas Oil Raceway (formerly Indianapolis Raceway Park) a year ago, and it’s his fourth podium finish of the 2015 season.

Franzoni ended up second, while Eidson took third and now leads the standings by 18 points, yet to finish outside of the top three.

Luke Gabin retired from fourth place after veering off track on Lap 12, the Australian rookie suffering front nosecone damage that would prove terminal. ?Fellow Aussie?Anthony Martin ultimately claimed the spot, ahead of?Parker Thompson, the Canadian who ultimately rounded out the top five.

Garth Rickards moved up four places from his tenth grid spot to finish sixth just behind Thompson, with?15-year-old?Keyvan Andres Soori finishing seventh, and?Yufeng Luo taking eighth.?Ayla Ahren tied her best finish to date by coming in ninth, and her Team Pelfrey teammate?Nikita Lastochkin drove brilliantly to salvage a top-ten finish after being forced to sit out qualifying due to a practice crash earlier in the day.