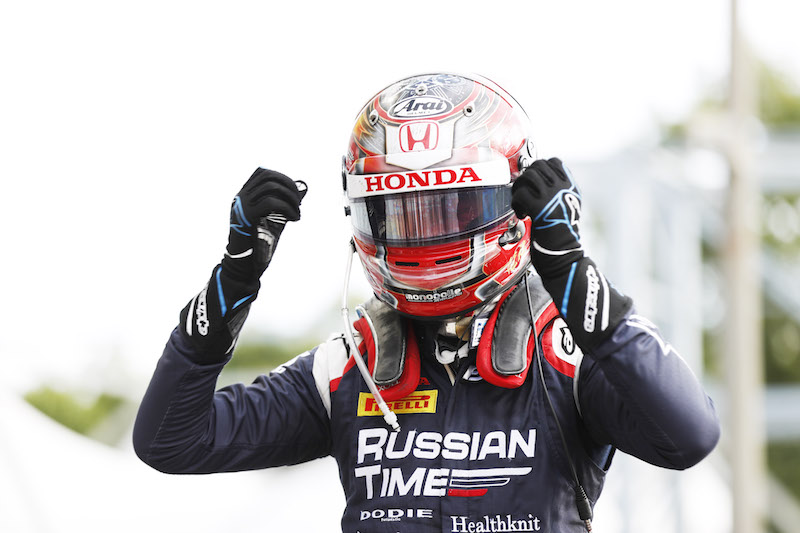 Tadasuke Makino used an alternative strategy to claim a shock first Formula 2 win from 14th on the grid in the Monza feature race, leading Artem Markelov in a Russian Time one-two.

Honda-backed Makino, who had yet to finish higher than sixth in his rookie F2 campaign, started the race on the medium tyres while all the frontrunners favoured the supersofts.

Makino moved up to eighth on the first lap, and as the supersofts quickly faded, he was into lead by Ascari on lap five after overtaking Markelov.

After Markelov and the other frontrunners pitted at the end of laps six and seven, Makino had a 45-second margin over his team-mate and was able to match the pace for much of the race.

He pitted with just three of the 30 laps remaining with a 40s lead, emerging 3s ahead of Markelov and finishing up 1.7s ahead.

Markelov had taken the lead of the race on the run to the first corner from fourth place on the grid – helped by front-row qualifier Sergio Sette Camara being forced to start from the pits.

Pole-sitter George Russell’s start was not as good as Alex Albon and Markelov behind him, and although he swept across the track to cover off Markelov, the Russian picked up the slipstream and burst into the lead, nearly banging wheels with Albon in the process.

After Markelov went deep at the second chicane on lap three, Albon got a run, and took the lead into the first corner on the next lap.

One lap later, Markelov got the lead back, just before Makino came steaming past both.

Russell managed to beat Albon out of the pits and then went after Markelov, diving past into the Parabolica on lap nine having nearly hit the rear of the Russian Time car.

Markelov promptly swept back ahead down the pit straight past a furious Russell, who said Markelov’s strategy of slowing into the Parabolica to let him past “was extremely dangerous”.

Russell was passed around the outside of Turn 1 by Albon a few laps later and then fell into the clutches of his title rival Lando Norris, who had qualified six places behind.

Norris had two wheels on the grass on the outside of Curva Grande trying to pass his rival at half-distance, before five laps later completing the move on the inside line.

Russell tried to fight back immediately with a late move inside Turn 1 only to miss the corner, but he made a successful bid to regain the place two laps after that.

The battle took Russell out of contention for the podium, which was completed by Albon, but he finished fourth with an increased lead of 13 points over Norris, who fell back to sixth behind Nicholas Latifi on the penultimate lap.

Norris’ Carlin team-mate Sette Camara produced a strong recovery drive to seventh place, netting himself another chance at a front row start for the sprint race.

Mechanics were still with the Brazilian’s car later than permitted on the grid, and although he was able to complete the formation lap, he took the start from the pits.

Aside from Makino, MP Motorsport drivers Ralph Boschung and Dorian Boccolacci also started on the medium tyres but couldn’t make the same impact on the race despite making good progress through the supersoft starters early on.

Boschung rejoined from a late pit-stop just behind Sette Camara in eighth, but was ultimately beaten to sprint race pole by Antonio Fuoco, just holding on to ninth place over Nyck de Vries.