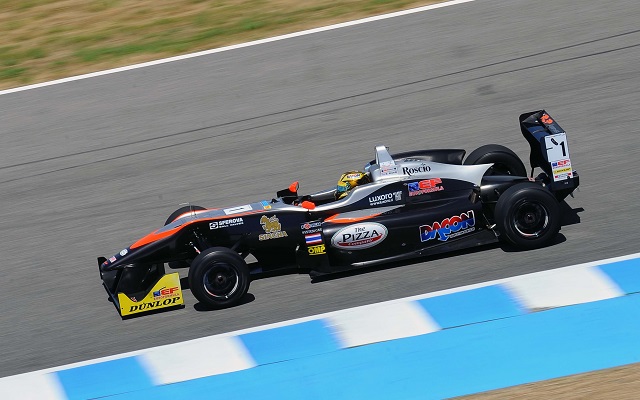 RP Motorsport’s Sandy Stuvik claimed his fourth win of the season in the Sunday Euroformula Open race at Jerez, increasing his lead in the standings.

Having run in second during the opening stint of the race, Stuvik inherited the lead when teammate Artur Janosz went into the pits to serve a penalty.

The Polish driver started from pole position and had to veer to the left to keep fellow front row starter Alex Palou behind.

That move allowed Stuvik to take second from Palou in the first corner, as RP’s leading duo set out to pick up a second 1-2 finish for the team.

At the race’s half-point, Janosz looked set to pick up his second win of the year, running three seconds ahead of his Thai teammate when he was handed a drive-through penalty, allegedly for his blocking manoeuvre at the start of the race.

The Polish racer took to the pits, handing the lead to Stuvik and himself rejoining in seventh. He then tried to pick up the pace to salvage as many points as possible, but ended up spinning on-track and making contact with Tanart Sathienthirakul, which effectively ended the race for both of the drivers.

Out front, Stuvik was enjoying a relaxing Sunday drive, eventually crossing the line six seconds ahead of Palou. A further four seconds down, Yarin Stern rounded out the podium.

Dzhon Simonyan picked up his first points in the series with a solid fourth place, while Cameron Twynham managed to keep Nicolas Pohler at bay to pick up fifth.

Sean Walkinshaw was seventh, repeating his best result in the series. Wei Fung Thong managed to keep a charging Gerardo Nieto at bay for eighth, while Andres Saravia rounded out the top ten.