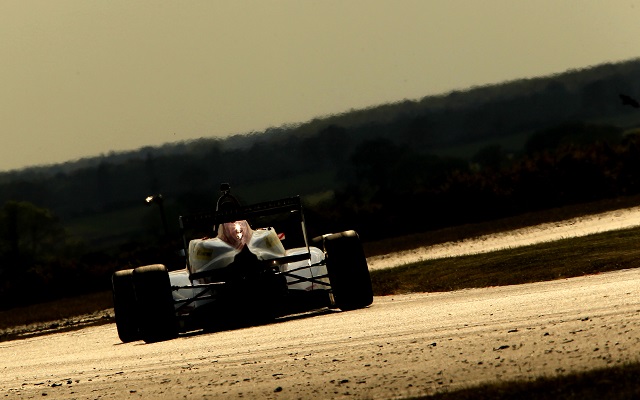 Lanan Racing’s Arjun Maini became the fifth different winner of the 2014 BRDC F4 season, having made the most out of his reverse-grid pole in race two at Snetterton.

The Indian rookie led from lights to flag, comfortably building up the gap while drivers were fighting behind him.

At the start of the race, Maini managed a solid getaway and had amassed a lead of more than one second over second-placed Diego Menchaca when the race was interrupted.

There was contact between potential challengers Nicolas Beer and Sennan Fielding, which brought out the safety car for the next three of the race’s planned ten laps.

The Indian rookie nailed the restart at the end of lap four and, as Menchaca’s hands were full with trying to keep second, Maini would calmly pull away at the lead, taking the checkered flag at the end of lap nine due to the 20-minute race duration limit.

With Menchaca defending from George Russell, the championship leader briefly fell behind Gustavo Lima, but managed to fight his way back into the top three a couple of laps later.

Raoul Hyman also found his way through Lima to claim fourth as the Brazilian settled for fifth ahead of race one winner Will Palmer.

Struan Moore made it three Lanan cars in the top ten, while Rahul Raj Mayer overtook Rodrigo Fonseca for eighth with two laps to go.

HHC racers Palmer, Hyman and Fielding are set to lock out the first three places on the grid for race three later today.