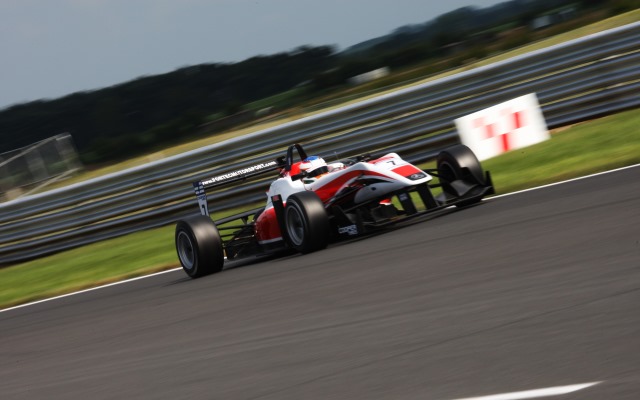 Matt Rao scooped his second win of the British F3 season in race two at Snetterton after late contact ahead between Camren Kaminsky and Sam MacLeod.

Peter Li had started from the reverse grid pole position, but was passed by Kaminsky on the first lap. Double R driver Kaminsky would have to deal with attacks from all three Fortec drivers. Rao was the first to challenge, before falling behind his team-mates Martin Cao and MacLeod.

Cao’s race came to an early end on lap ten with mechanical woes, at a point when the championship leader was on for his eighth second-place finish from as many races.

Race one winner MacLeod then took up the assault on Kaminsky, but when he moved for the lead at Riches with two laps left, the pair made contact. It put Kaminsky out of the race, and allowed Rao to claim the win ahead of MacLeod.

Andy Chang stayed out of trouble to complete the podium as the final finisher, with Li having gone off on lap four.

Maiden pole for Janosz in Euroformula Open at Jerez