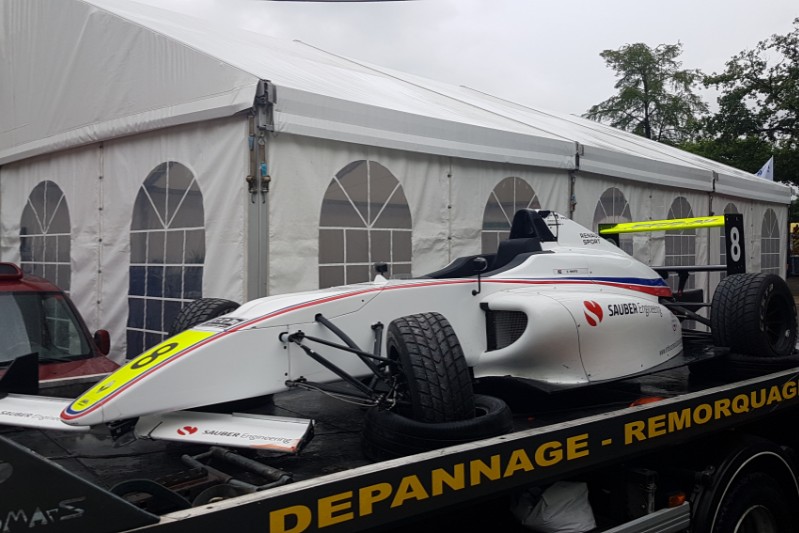 Stuart White took an impressive double pole in French Formula 4 qualifying at Pau, but ended the session by crashing on his last lap.

The Sauber Engineering-backed South African struggled to hook up all three sectors early on, with championship leader Hadrien David setting the pace. Several red flag periods gave the track more time to dry, which was when White came into his own.

He moved to the top of the times with four-and-a-half minutes to go, displacing David, who erred caution on his next lap due to a signal for yellow flags at Turn 12. A few minutes later White went over the limit, resulting in a collision with the barriers.

“The track was improving more and more, and usually we don’t go to third gear before that corner, and the lap before I was hitting the limit quite a lot,” White told Formula Scout.

“So I was going for third gear, but then couldn’t get it to downshift as I locked the rears and couldn’t get the car stopped.

“It eventually went to second gear and snapped, and then the front just went into the wall. I apologise to the team and everybody, but at least we still got it done for pole on the lap before.”

Reshad De Gerus pipped Valente to second place in the closing moments, before White made his session-ending error in the second sector.

David will start just fourth for race one, but moves up onto the front row alongside White for race three. He was 0.199s away from White on both fastest and second-fastest times, and more than half a second clear of Valente and de Gerus on second-best laps.

Jules Mettetal was nearly nine tenths back from David but heads up row three of the grid alongside Evan Spenle, with the pair to trade places for race three.

Isack Hadjar was the fastest junior in seventh overall, with the Danish duo Valdemar Eriksen and Mikkel Grundtvig separating him from his main rival Victor Bernier.

The two earlier red flag periods were caused by Mathis Poulet – whose rear end got loose at Turn 8 and pitched him side-on into the barriers – and Bryson Lew, who hit the guardrail at Turn 5 on his outlap after the first red flag. He did manage to rejoin the circuit and make it back to the pits.