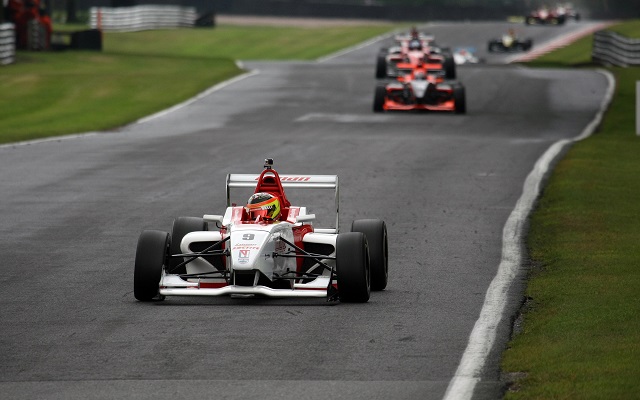 Moore steered clear of the chaos that unfolded in the pack and led all 12 laps to take the checkered flag.

The race took place on a drying track, which led to several drivers opting to start on the wet tyres. While Moore got a smooth getaway off the line, his teammate George Russell struggled with the start from second, but managed to keep the position over the opening lap.

As Russell came under increasing pressure from championship rival Raoul Hyman, the two came together on the second lap and were both eliminated from the race.

MGR’s Chris Middlehurst ended up inheriting second due to the incident and managed to keep within three seconds of Moore for the entirety of the race, but never really presented a challenge, instead having to fend off HHC’s Will Palmer for second.

He held on, forcing Palmer to settle for third ahead of his teammate Sennan Fielding.

In what was to be an incident-filled race, Russell and Hyman did not wind up being the only retirements. Arjun Maini and Diego Menchaca went off from fourth and sixth respectively on lap four, whilst Rahul Raj Mayer was among the numerous top ten contenders to record a DNF later on as his wet-tyre race was ended on lap eight due to an incident with Michael Claessens.

It was Tom Jackson who rounded out the top five at the line, recording his best finish of the season. Gaetano di Mauro took sixth for PetroBall, while Jordan Albert was a minute adrift in seventh.

Diego Borrelli and Claessens completed the list of classified finishers a lap down.

Tom Bale and Alfredo Zabalza were mistakenly shown the checkered flag a lap early and, as such, both pulled into the pitlane on what should have been their final lap, preventing themselves from being classified as finishers.