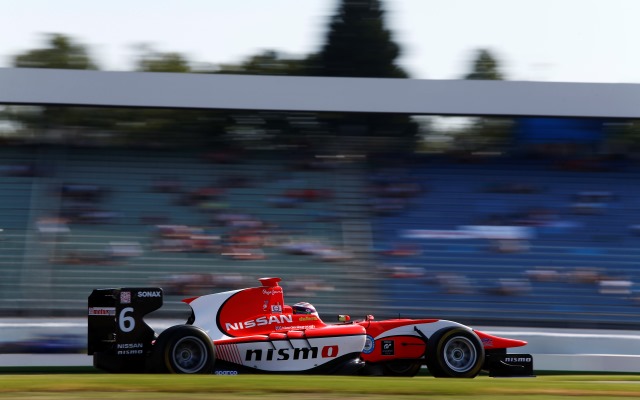 Jann Mardenborough claimed his first single-seater win in Europe as he converted pole position to victory in the second GP3 race at Hockenheim.

The Nissan GT Academy graduate made a great start from the reverse grid pole, although a couple of early lock-ups prevented him from building an early gap over Dino Zamparelli, who got the jump on front row starter Jimmy Eriksson.

Zamparelli stayed within a second of the leader for several laps but Mardenborough withstood the pressure and then began to pull away, stretching his lead to 3.8 seconds by the chequered flag.

Zamparelli clinched his second podium of the season, while Eriksson survived an attack by title rival Alex Lynn to finish third and claim a couple of points back against the Red Bull Junior, who now leads by 18 points. Lynn had jumped from seventh to fourth on lap one thanks to a tight line at the hairpin as others ran deep, and got closest to challenging Eriksson when he pulled alongside exiting the hairpin, but the Swede was brave enough to turn in ahead at the right-hand kink.

As in race one, Dean Stoneman went forwards towards the end, passing Nick Yelloly for fifth as British drivers once again filled five of the top six places. There could have been another in seventh but for contact between Emil Bernstorff and race one winner Marvin Kirchhofer at the hairpin that saw both retire to the pits.