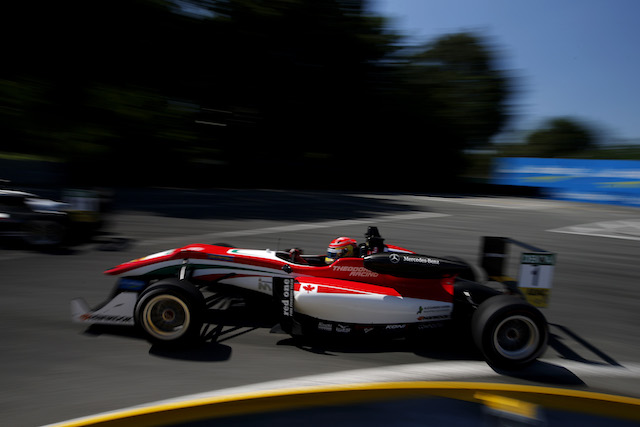 Lance Stroll?picked up another win to extend his FIA Formula 3 European Championship lead after?Joel Eriksson was taken out while on course for a maiden win in the first Norisring race.

Motopark rookie Eriksson had pulled?off a stunning move on polesitter Stroll on lap four to take the lead through the Scholler S in the middle of the lap, hanging around the outside of the right-hander to claim the inside at the left.

He was still ahead of the Canadian at the start of lap 20 when?Callum Ilott – making a great fightback from an engine penalty that forced him to start 12th – made an attempt to pass Stroll down the inside of Turn 1.

The Van Amersfoort Racing driver lost control however, getting sideways and smashing into a helpless Eriksson. Ilott was out on the spot while Eriksson limped back to the pits, where he was understandably furious.

Instead of being relegated to third, Stroll was gifted the lead as the race went under safety car.

Eriksson’s Motopark team-mates Sergio Sette Camara, Niko Kari and Guan Yu Zhou were next up, but instead of going after Stroll they fought with each other and soon triggered another safety car when Sette Camara and Zhou tangled over third at the Scholler S.

After the restart, Stroll kept the lead to win by 0.6 seconds over Kari, and with Ilott and Maximilian Gunther failing to finish, he extends his points lead from 38 to 63.

While Ilott is showing stunning pace around the Norisring, he seems unlikely to avoid an additional grid penalty for race two for crashing into Eriksson.