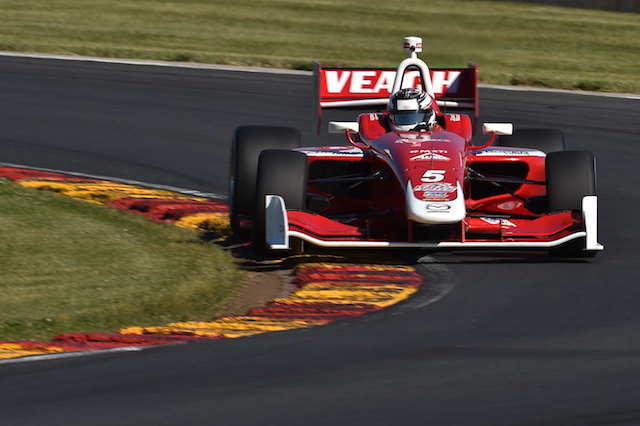 For the first time in twenty-six years, the Indy Lights series will race at the legendary Road America course and the field will be led by Belardi Auto Racing driver?Zach Veach.

Veach set the fastest time in Friday afternoon’s qualifying session by a scant 0.139 seconds over the second-fastest qualifier,?Santiago Urrutia. This gives the Ohio native Veach his first Indy Lights pole position since his last race in the state of Wisconsin – at the Milwaukee Mile oval in 2014.

His fastest lap of 1:52.941 obliterated the previous track record for the series, set back in 1990 by Mike Snow, by nearly twelve seconds.

Championship leader?Ed Jones will start his first race at Road America from third, next to?Andre Negrao, in the second of a truncated Schmidt Peterson Motorsports lineup, in fourth – his best Indy Lights start.

Second in the championship and newly-crowned Freedom 100 winner?Dean Stoneman was fifth-fastest, next to?Felix Serralles in sixth, and?Kyle Kaiser in seventh on the grid.?Garret Grist did a more than admirable job to qualify eighth for his first Indy Lights start for Team Pelfrey, ahead of veteran teammate?Juan Piedrahita?in ninth, and rookie?Zachary Claman DeMelo in tenth.

Shelby Blackstock will start eleventh, with the outside of row six occupied by the second debuting driver -?James French, a Wisconsin native and competitor in the IMSA SportsCar Championship, in the second Belardi car.?Neil Alberico?and?Dalton Kellett?occupy the back row of the grid.

This weekend’s Indy Lights races will have a different look, with the most noticeable absences being that of?Felix Rosenqvist, fulfilling reserve driver duties for the Mercedes-AMG team in the DTM, and?RC Enerson, who has halted his 2016 Indy Lights campaign outright. The number 77 Schmidt Peterson Motorsports car, shared by?Scott Anderson and?Heamin Choi this season, is also not entered.