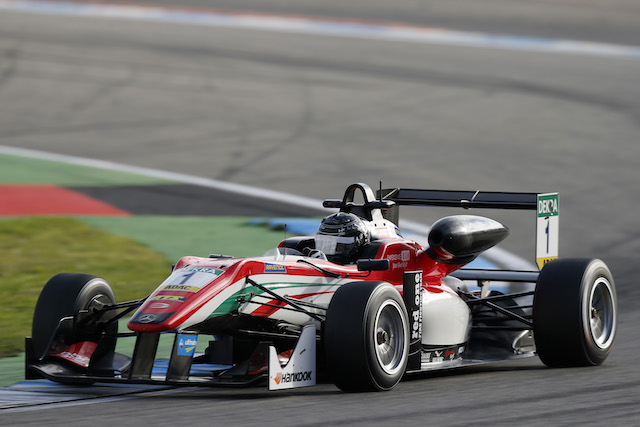 FIA Formula 3 European champion Lance Stroll racked up his 13th win of the season in the penultimate race of the campaign at Hockenheim.

It appeared?a straightforward race for the Williams Formula 1 driver in-waiting, having?created a lead of 1.5 seconds on the first lap from pole position.

Behind him,?Sergio Sette Camara shot from fourth on the grid to second, narrowly squeezing between second and third-place starters?Jake Hughes and?Joel Eriksson.

Sette Camara was maintaining his?gap to Stroll when he was handed a drive-through penalty for jumping the start.

Stroll had increased his margin to 2.1s by the end of lap eight, and when Sette Camara headed for the pits on the subsequent tour, his advantage increased to 3.6s over?Eriksson.

That gap remained largely the same over the remaining distance, Eriksson able to cut it by three tenths only briefly. Stroll moved to 4.7s?clear in the final few laps.

Second place for Eriksson represented a win in the rookie class, meaning he wraps up that title in style ahead of the final race, when he starts from pole positions for the first time.

If Stroll wants to conclude his junior single-seater career with a Hockenheim hat-trick, he will need to do so from fourth on the grid.

Ilott went side-by-side with Eriksson on the opening lap, but the Swede impressively held on around the outside of the Mercedes Arena.

David Beckmann and debutant Hughes finished close behind Ilott and some way clear of?Ralf Aron, who was Eriksson’s remaining rival in the rookie scrap.

George Russell?once again seared through the order from a lowly-grid position after his Friday engine change, finishing in seventh from 16th on the grid with passes on?Anthoine Hubert and?Maximilian Gunther.

Ninth for Gunther was still more than enough to seal the runner-up position in the championship however, having had 48 points in hand over Russell coming into the race.

Two of the race’s oldest drivers had a clumsy coming together at the hairpin on lap three.?Nick Cassidy and?Alexander Sims had already rubbed wheels on the approach fighting over 10th, before Sims ran deep.

As he cut back, Cassidy got too close and had his front-left corner run over, causing him to slow immediately and retire.

Update: Ilott was excluded for not having the required fuel left in his car to provide a sample.