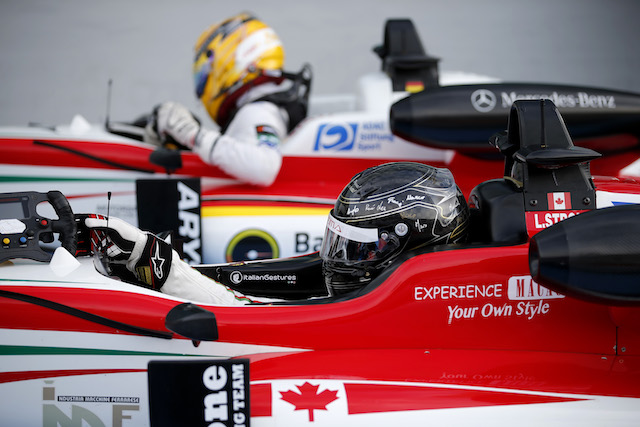 The 2016 champion Stroll won after contact with Gunther at the Mercedes Arena on lap one, having conceded the lead into the hairpin two corners earlier.

Stroll dived to the inside under braking with?Gunther attempting to close the door. The contact pushed the German wide and down to third before recovering to second later in the race.

The incident?was investigated by the stewards after the race, but they chose not to take action against either driver.

“Going into corner seven, Maxi left a little bit of room on the inside and I figured I would go for it,” said Stroll.

“Once my nose was there he defended last minute and pushed me to the inside of the track and that?s where we had contact.

“I saw a gap and I went for it. If there hadn?t been a gap and Maxi had completely closed the door before I dived down the inside, I wouldn?t have gone for it.

“But there was room and I went for it. We had contact because he closed at the last minute.”

Gunther, whose second-place finish took him a step closer to securing the same place in the final standings, added: “Honestly, I didn?t expect the move, especially when we?re team-mates.

“There was contact and I opened [the steering] then, otherwise there would have been something different maybe.”

Nick Cassidy had a front-row seat for the collision having been part of a three-wide all-Prema tussle into the hairpin.

“It caught me by surprise as well but fair play, a really good move,” said the New Zealander.

“It was a bit of a last minute try to defend by Maxi, a bit of contact, but that?s racing.