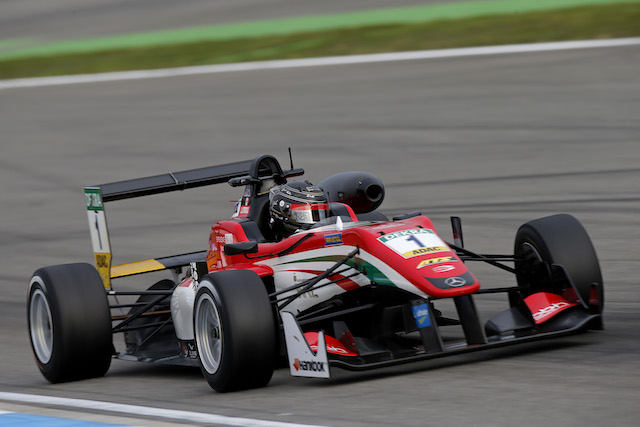 FIA Formula 3 European champion Lance Stroll won the opening race of the final round at Hockenheim after contact with?Maximilian Gunther in an all-Prema, three-way fight for the lead on the first lap.

The sequence of events leading to the clash at the Mercedes Arena began when polesitter Stroll locked up and ran deep at Turn 2, allowing Gunther to get alongside exiting onto the Parabolika.

Nick Cassidy got in the slipstream to make it three-wide into the hairpin, where Stroll?had been dumped to third on entry before taking second back from Cassidy in the corner.

Stroll then dived to the inside of Gunther under braking at Mercedes, but the door was not left open for him and the two collided, pushing Gunther wide into the run-off area and relegating him to third.

Stroll was then able to quickly open up a three-second lead over Cassidy, and even after?Gunther had cleared the Kiwi down?the inside of the hairpin on lap eight, this margin grew to 6.2?seconds by the flag.

The incident between Stroll and Gunther is to be investigated by the stewards after the race.

Cassidy and?Ralf Aron completed a Prema lockout of the top four places, with the Estonian rookie?finishing just?two seconds behind his team-mate.

Sergio Sette Camara had a lonely run to fifth place ahead of an intense battle for sixth, which was contested between?Joel Eriksson and?Anthoine Hubert?for most of the race.

The pair went side-by-side on more than one occasion but Eriksson held on to the place, and Hubert had received a five-second penalty anyway for starting from an inaccurate grid position.

Later on the Frenchman came under attack from series debutant?Jake Hughes, who fell from third on the grid to 11th in the early laps before fighting his way back past?George Russell,?Guan Yu Zhou and?Nikita Mazepin.

He went side-by-side with Hubert on the penultimate lap, then attempted to dive?to the inside of the Frenchman into the hairpin on the final lap.

Hubert jinked slightly to his inside however and Hughes was launched briefly into the air as his front-right suspension was ripped out of place, forcing him to retire on the spot.

Hubert’s penalty dropped him to 10th behind the Hitech trio of Russell – who started from the back after missing qualifying – Mazepin and?Alexander Sims.

Lando Norris?made strong progress in his first FIA F3 race from a pit lane start, passing Imola winner Niko Kari and getting into a fight for 13th with?David Beckmann and?Pedro Piquet which ended in contact between the Briton and the Brazilian at Mercedes and Norris retiring to the pits.

Callum Ilott and?Mikkel Jensen were both eliminated after first-lap damage, with an incident between the pair to be investigated.