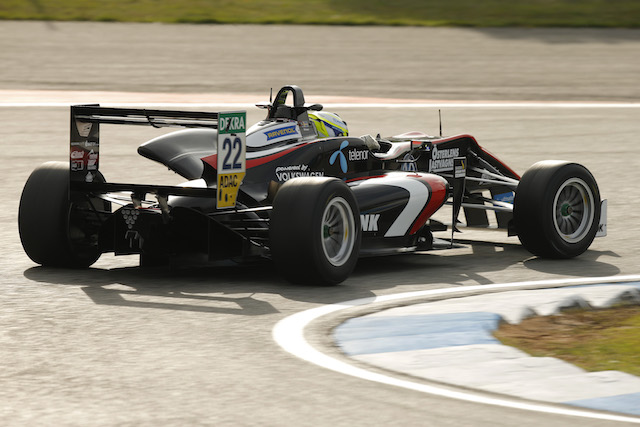 Joel Eriksson will start from FIA Formula 3 European Championship pole position for the first time in the final race of the season at Hockenheim, after Lance Stroll?starts from the front in race two.

Recently-crowned champion and Williams Formula 1 driver elect Stroll – who inherited race one pole when?David Beckmann was excluded for a technical infringement – went to the top of the times in Q2 with four minutes left.

None of Stroll’s other laps were within four tenths of his best however, so he was fifth in the second-fastest lap classification that sets the grid?for race three.

Eriksson on the other hand achieved two fastest laps that were only 0.089s apart, with a 1m31.968s enough to put him third on the grid for race two and a 1m32.057s good enough to beat Hughes to race three pole by 14 thousandths of a second.

Hughes will start the weekend’s races third, second and second having come into the weekend with limited history in an FIA F3 machine.

Sette Camara ended up fourth for race two, which will be his best grid slot since Pau in May after being denied poles by engine-change penalties at both the Nurburgring and Imola in recent weeks.

Ahead of Ralf Aron, debutant?Lando Norris was ninth quickest for a second straight session – but has to start all three races this weekend from the pit lane after exceeding the championship’s testing limits.

With his two best laps only five thousandths of a second apart, Norris?would?have been?fourth on the grid for race three.

Ilott will be third in race three with Stroll fourth and Sette Camara fifth. Russell would in theory have climbed ahead of Cassidy for sixth, but takes three 10-place grid penalties for an engine change after practice.

Maximilian Gunther?starts second on the grid for race one but had a woeful second session, 13th fastest after having a time disallowed and only 20th out of 22 on second-fastest laps. Russell’s penalties keep the German in a strong position to retain second in the standings, however.