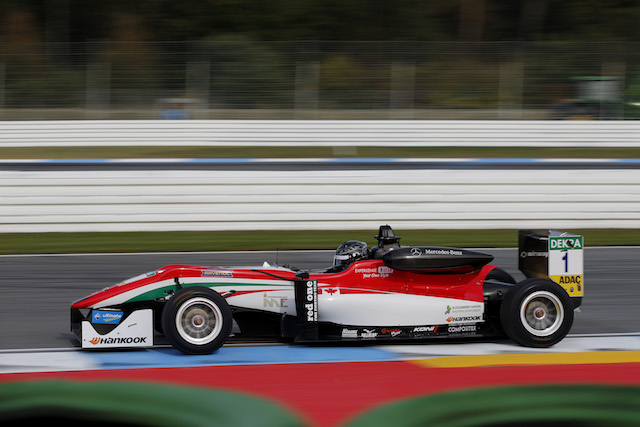 Lance Stroll?rounded out what is likely to be his final weekend in junior single-seaters by completing?a maiden FIA Formula 3 European Championship hat-trick at Hockenheim.

The Canadian, who is expected to be announced as a Williams Formula 1 driver in the coming weeks, had to work for the win in race three (which was delayed by nearly two hours after earlier fog)?having started fourth on the grid.

He got a great start though, forcing his way inbetween?Jake Hughes and?Callum Ilott to follow polesitter?Joel Eriksson through Turn 1.

Eriksson then locked up and went deep at the hairpin for the first time, allowing Stroll to get alongside.

Stroll went around the outside of his rival at the Mercedes Arena, but got over the kerb on the exit allowing Eriksson to sweep back past around the following right-hander.

On the second lap, Stroll went down the inside of Eriksson at the hairpin and completed the move around the outside of Turn 6 and the inside of 7.

From there the Prema driver – who won’t contest next month’s Macau Grand Prix – pulled away, finishing up 4.7 seconds clear.

As the win battle was being decided on that second lap, Hughes was being relegated from third to fifth by?Nick Cassidy and?Sergio Sette Camara.

The Briton fought back brilliantly though to finish his FIA F3 debut weekend with a podium, despite strong defences from both Sette Camara and Cassidy.

A switchback move on Sette Camara at the hairpin on lap 12 put him past the Red Bull Junior, and he took third from Cassidy when the New Zealander locked up and ran deep while defending at the Mercedes Arena.

Cassidy’s fourth was enough for him to keep hold of the same place in the standings ahead of Eriksson. Ilott’s hopes ended in the pits after being sent backwards in the early stages.

Alexander Sims quickly followed Hughes past Sette Camara to finish fifth on his one-off return to the series with Hitech.

A struggling Sette Camara just held on to sixth ahead of?Ben Barnicoat, who enjoyed his best result since Spa in July.

Prema drivers?Ralf Aron and?Maximilian Gunther were next up – the German coming from 17th on the grid – with Anthoine Hubert in 10th.

Hitech had all four of its drivers inside the top 10 at one stage, but?Nikita Mazepin got tangled up with?Niko Kari and then?Dan Ticktum, while?George Russell retired to the pits early on.